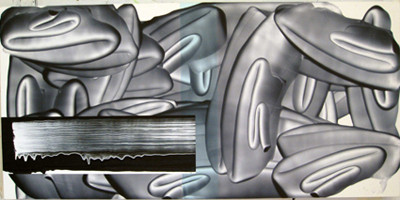 Marta Cervera Gallery is proud to present David Reed’s first solo exhibition in Spain.
David Reed’s paintings have a relationship to several diverse movements including the Pop Art of Andy Warhol and Roy Lichtenstein and the Abstract Expressionism of Barnett Newman and Willem de Kooning. His paintings also relate to film and photography, as do the paintings of Gerhard Richter. However his paintings cannot be reduced to these relationships alone.
In Reed’s paintings there are no representational images. The relation to photography and film is sensed instead through a continuous but changing light and the feeling of motion. Also, his extreme horizontal formats relate to cinemaScope.
Nor is there in his paintings the traditional trace of the brush directed by the hand in contact with the canvas. Instead, we find a paint surface with an almost industrial, manufactured look that suggests a rational coldness with none of the melancholic pathos often associated with oil painting.
The color of the paintings is original and strong without relying on traditional harmonies and color combinations. The marked presence of strong post-industrial colors, almost phosphorescent, mixed together with the popular colors from products of the fifties, such as the green and pink of chewing gum, reinforces the industrial and impersonal nature of the color that, paradoxically, distinguishes his work and makes it unique.
Finally, there are the persistent spiraling shapes. Like the unspooling of a roll of film, these are not really gestures. Seemingly not made by hand, precisely placed, and denying any uncalculated impulse, they are a tool that creates movement, depths of focus, and contrasts of light. Once again, we see how Reed deliberately and subtly avoids the emotions of expressionism. Added to all this is the use of repetition; the frequent use of the same motions and structures. This could be like a game but isn’t.
On a conceptual level his attitude tends to be more implicit than explicit, but this conceptual level is certainly as important as the formal aspect. Undoubtedly, Reed uses a pictorial language that is internalized from painting. He incorporates painting by reinterpreting it. This results in paintings that are “cold” and semi-industrial. But this is just what they pretend to be. There is a heat beneath the coldness. This emotional duality links him to his contemporaries such as Jonathan Lasker, Peter Halley, Ed Ruscha, Haim Steinbach and Sherry Levine. It is also interesting to contextualize Reed with three-dimensional works and film or photography by artists such as Charles Ray, Jorge Pardo, Anselm Reyle and James Welling among others.
A few moments in dialogue with these works can conjure up shadows and lights, openings to different places that rearrange color and space, raising connotations at once haunted and contemporary. Experimenting with new possibilities and concepts, these spaces take us somewhere else than the traditional perception of painting. Reed’s works vibrate in architectural tension and reference technological resources such as screens, advertising, and industrial design. These are the same experiences we have to negotiate in our everyday lives. In our world of reproductive forces, we find and replace images over and over so that they often become more familiar than the original. These repeated images end up being as real as the variations of the same concept. Or as real as an object seen from different points of view, seen in varying light at different times of the day. In these cases, due to how we move and how time passes, the object seems to change in an orchestrated sequence. Reed breaks the curse of this monotony and transforms repetition into a rich and inexhaustible source.
www.galeriamartacervera.com/