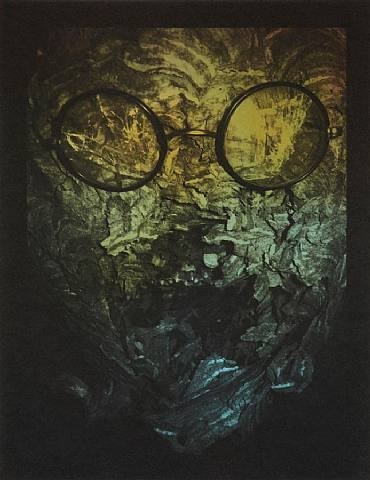 After reading the line, “ten million pictures fall from ten million walls” in Douglas Coupland’s Girlfriend In A Coma, I started to relate the imagined end of civilization to the imagined end of sculpture, painting, etc. I never put too much stock in the fact that any of these mediums were truly dying because I saw them as corpses dragging themselves through the streets to rehabilitation centers, only to be reborn more grotesque and perverse than before.

In many ways I’m thinking of this show as a kind of sister to the one I did a year ago in Rome titled, ‘Eroding Rainbow’. This installment could be thought of as a fully eroded rainbow, a stark reality were the daylight takes back over. The idea is to evolve the works constantly to show a life cycle comparable to that of breeding maggots. Something dies, a fly lays eggs on the rotting flesh and the maggots survive on a dead thing. I’m interested in this cycle because it seems that I’ve had to consistently kill my work to make it live and it’s almost completely fed off of itself from the beginning.

If I were to go directly into some of the work I can see an interest in the stillness of miscommunication (static paintings) and a romanticized corrosion (rusty sculptures) that I try to subvert through a deadpan dark comedy, specifically within the ‘Civilian’ photographs. It’s as if the figures in the photographs are a metaphor for a tragic and fractured body relating to all histories and the sometimes futile attempt that we make as a culture to put those pieces together for a sense of order, when in actuality we end up arriving at a sort of Frankenstein. Other parts of the show relate to the idea of transformation (moltings) while trying to express what it feels like to be in an extremely charged and somewhat claustrophobic space (vented fireplace room).

These are waiting rooms. What we’re waiting for is the subject and this is completely elusive at times even to me, but my goal is to set up an environment or landscape that alludes to an entropic movement, where what we’re waiting for is both tangible mentally but almost completely falling apart physically. It’s the negative space created by the constellation of objects that gives way to an imagined narrative that moves the work along. I’m not sure what the ending will be, but like any writer I’d like people to keep reading.
www.galeriamartacervera.com/