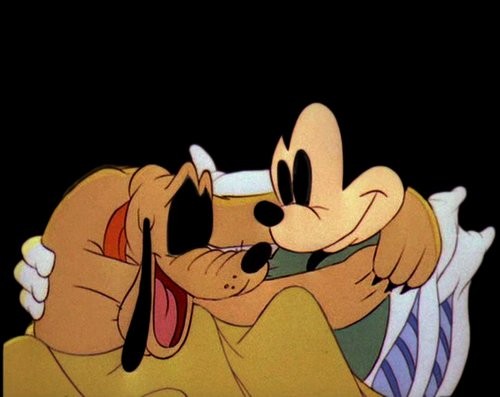 From May 7 till June 5, 2010 Galerie Martin Janda is showing the exhibition Blinking with films by Martin Arnold, Runa Islam and Owen Land.

People tend to blink between 8 and 41 times per minute. This means that, during this time frame, a person is, on average, blind for about six seconds. Traditional motion pictures, too, flicker, projecting 24 frames per second, which are interrupted by 48 phases of complete darkness. Sitting in the dark recesses of a movie theatre, watching the images fluttering across the screen, the lid’s blinking reflex sets in, uniformly, with about half of the audience, in keeping with the events depicted. The matter so projected is, therefore, not only collectively viewed but also collectively overlooked. The individuals attending the screening thus become an audience; not least through the social loop of the simultaneous act of repetitive blinking, constituting themselves, through their shared temporary blindness, as a group.
Darkness does not, however, pertain solely to the cinema. The blindingly white walls of exhibition halls in art galleries and museums require us to blink if we want to recognise the picture in amongst the many dark omissions, the blind spots in our field of vision. Can a history of seeing be told without taking cognisance of the history of overlooking? The exhibition gathers together artistic positions that display a common interest in the joy of recognition and the failure to recognise, in perception and misperception, appearance and disappearance, in a word – in blinking. (Martin Arnold)

Martin Arnolds Shadow cuts (2010) observes the happy end of a cartoon film by rewinding it. Depicted by flickering images, the eyes of Mickey and his companion Pluto are gradually getting disentangled from the characters, sometimes the eyes – or the characters – even disappear completely. Temporary blind characters on the screen are faced by temporary blind viewers, whose perception fractures in the dark phases of the projection.

The set up of a train carriage serves Runa Islam as the central motif for her short film Rapid Eye Movement (2002); the trope of a ‘dream’ serves as structure to interweave fragmentary narratives, emotions, incidents and filmic motifs, resulting in a cognitive journey which intermingles real time and dream-time, fiction and reality by abrupt, disjunctive cuts. Throughout, the film is punctuated with close-up images of eyelids flickering during REM sleep; their intense, frantic movement suggestive of the inner projection or film within.

Owen Land, formerly known as George Landow, is considered a prominent representative of the structural film-movement, which self-referentially referred to the cinematographic apparatus and its technical means and conditions. All motifs in Film in Which there Appear Edge Lettering, Sprocket Holes, Dirt Particles, Etc. (1965-66) reflect the conditions of the cinema-apparatus: not only by the eponymous sprocket holes, edge lettering and dirt particles, but also by the appearance of a so-called “China Girl” – a short close-up of an anonymous female face accompanied by color bars that appears in the reel leader. A "China Girl" was used by the lab technician for calibration purposes when processing the film. Her task was to stare unmoved into the camera – which inevitably caused her to blink.

Martin Arnold is one of the most esteemed filmmakers, coming from the field of experimental film. Arnold achieved international recognition especially with a series of 16mm films including pièce touchée (1989), passage á l’acte (1993) and Alone. Life Wastes Andy Hardy (1998). In recent years, he produced and directed film installations in digital formats, such as Deanimated – The Invisible Ghost (2002), Silent Winds (2005) or Coverversion (2008). Arnold’s work was shown at international film festivals (including Cannes, Rotterdam, New York) and in renowned museums and cinematheques, such as Centre Pompidou, Cinematheque Royale Brussels, Tate Modern, National Film Theatre London and MoMA.

curated by_vienna is an ambitious Viennese project focused on promoting the cooperation between galleries and curators. Following a successful start in 2009 curated by_vienna will take place for the second time in Vienna from May 6 through June 5, 2010. For this year’s project the 20 participating galleries have invited artists to curate exhibitions on the topic of “art&film“ in the respective gallery premises. For more information see: www.curatedby.at

Accompanying curated by_vienna 2010, a comprehensive catalogue will be published at Verlag fuer moderne Kunst Nuernberg, which will be available at the gallery.
www.martinjanda.at