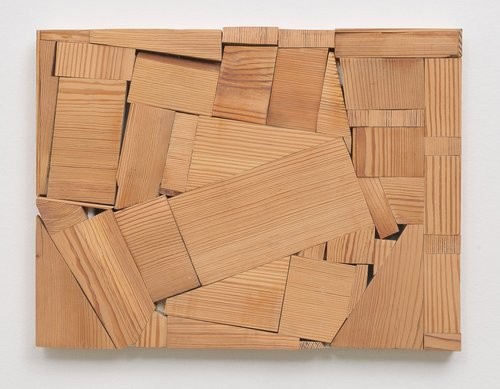 Galerie Martin Janda is pleased to present an exhibition by New York-based artist Donelle Woolford. This will be her first show at the gallery. Through her work, Donelle Woolford investigates myth and the process by which fictional characters and story lines enter the public imagination and, through their circulation and discourse, become real.
Donelle Woolford’s new paintings revolve around two unrelated cultural phenomena, both having to do with degradation and the color white. The first is the so-called “end of painting” that occurred in Europe and America in the 1960s and 70s. Ad Reinhardt’s Black Paintings aside, this historical moment was predominantly “white” both in terms of the images that were produced by the likes of Robert Rauschenberg, Agnes Martin, Roman Opalka, Jo Baer, and Robert Ryman and in the racial makeup of these artists themselves. The second phenomenon, one both more personal and remote, is the fact that Ms. Woolford grew up in the American South and is thus well accustomed to the cultural habits of rural Caucasian southerners, often pejoratively referred to as “white trash.”
As such, this show marks the very beginning of Ms. Woolford’s investigation into whether there might be a relationship — however speculative or farfetched — between the sparse endgame economy of late-Modernist painting and the desperate socio-economics of working class whites. This latter desperation has recently manifested itself as the so-called “Tea Party” movement in the United States, in which long-simmering race and class resentments have boiled over into virulent public displays of veiled threats, overt racism, and often humorously misspelled protest signs.