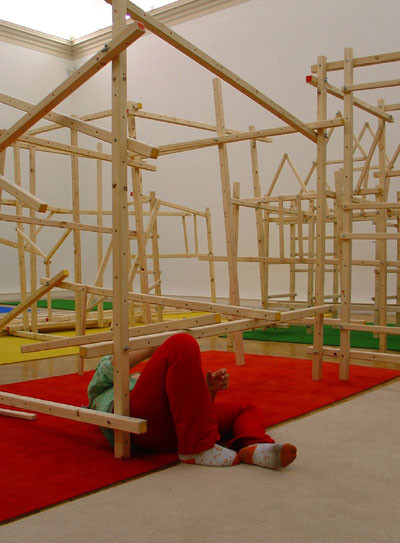 For Recent News / Big Bang (2006), Roman Ondak asked children to make depictions of how they imagined the origin of the universe. These drawings are grouped on the floor around a red plasticine ball. The title expands upon the query, interjecting everyday events in the abstract conception. The red ball, which brings to mind plastic explosives, reinforces the allusion to an explosion and the concentric circles emanating from it.

This installation is one of the five works which is exhibited in the group show Participation from April 26 to June 7, 2008, at Galerie Martin Janda. The show assembles works which were executed completely or partially by third persons and works in which the artists involved other persons as avenues. Questions are posed – in different media – regarding authorship and the influence production conditions have on the outcome.

Christine & Irene Hohenbüchler’s oeuvre includes work with different groups – prisoners and other marginalized groups, as well as children and students – according to the multiple authorship principle. Their bau–Stelle (2007) invites exhibition visitors to take part in creating a sculpture: wooden elements, like components of an oversized erector set, can be put together to form a latticework, but can also be taken apart again and rearranged. A mixture of furniture, sculpture and architecture emerges and changes – spatially – again and again. Colourful rugs structure the floor and tie the space together.

I Wrote this Song for You (2008): On the gallery’s upper level we present a sound installation by Nina Beier & Marie Lund. The two Danish artists asked friends to sing along with a recording of a song they have never heard before. These renditions of the song are all heard at once on eight vintage stereo speakers. Partly bold, partly timid, the fragile singing voices add up to a subdued choir, yet the different personalities and individual presentations of the piece of music are also discernible. A songwriter’s tune had gone unreleased, but in this setting it is given a voice, and hence, a second chance. "The work is about the song as a discourse with the different singers’ versions, and the melodies they predict. We are interested in focusing the piece around the song as a medium for personal and emotional expressions, and at the same time a cliché and standard format we all know how to join in on.” (Nina Beier & Marie Lund)

It is not possible to borrow the Mona Lisa, but Kirsten Pieroth was more interested in its exhibit label. For a show at the Tate Modern in London (2007), the German artist made an official request to borrow the Mona Lisa label from the Louvre; the museum granted her request – on the condition that all the formalities of a standard museum loan were met. In the loan agreement the label was treated as if it were a painting, with data describing the item’s title, material, dimensions and insurance value (25 euros). The correspondence between the institutions, loan agreement and a reproduction of the label are on display in a showcase in the gallery’s basement, accompanied by photographs which show the Louvre’s curator removing the label and a technician mounting it at the Tate Modern. Pieroth delegates the responsibility for the final appearance of her work to third parties or bureaucratic processes, consciously taking the risk that the project could be a failure.

Christoph Schäfer is one of the pioneers in participative practice: realizing civic participation projects past and present serves as a form of Realpolitik. The project Park Fiction, a park on the banks of the Elbe in Hamburg, for example, was begun in the mid-1990s, initiated by local residents and artists.
In these works on paper – created expressly for this exhibit – Schäfer addresses the appropriation and transformation by adolescents of a landscape characterized by depressions stemming from its bombing: The craters of their suppressed past have become our leisure landscapes. “If someone were to ask me how art might continue to develop and extend its frame of action without falling back on ugly universalism, I would respond that it would have to function like a skateboard, in other words, like a piece of equipment which not only yields a different perspective of the world, but also allows us to use it in a new way.” (Christoph Schäfer)
www.martinjanda.at