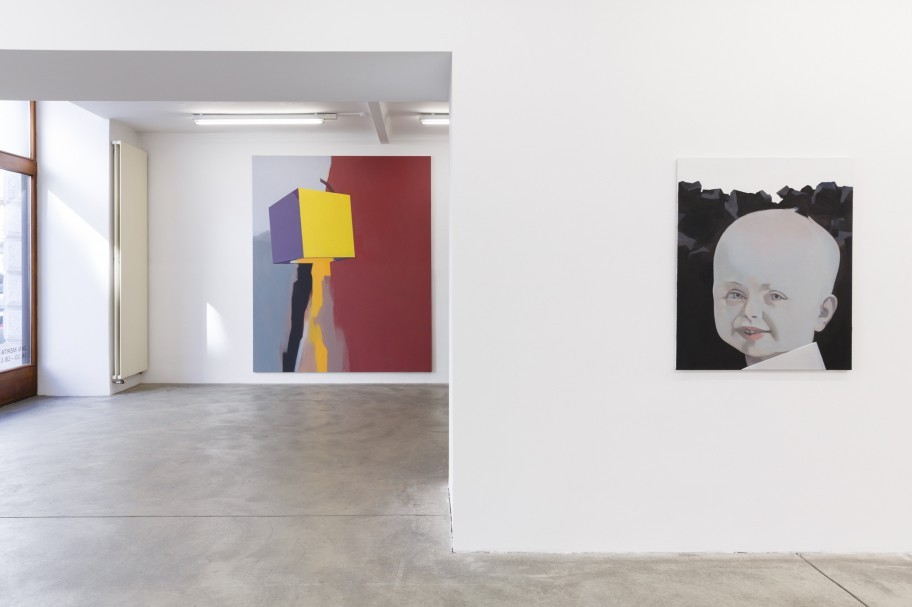 Organically fluid forms meet hard geometric edges; loud-coloured markings break through the colour palette which consists predominantly of fragmented and subdued tones; opaque colour surfaces alternate with transparent, scumbled layers or fragile pastel shades. Recognisable objects, people or animals dissolve in the fluidity of the painterly pictorial space or emerge from it firmly. Merta’s multi-layered paintings, reduced to a maximum, captivate us through their mastery and in their expression of a puzzling urgency, evoking associations with fellow painters such as Luc Tuymans or Willem Sasnal. Just like them, in his painterly practice, he draws from the abundance of post-medium possibilities and knows how to establish a mélange of relationships through the expanded use of non-painterly processes which reaches far beyond the limitations of the canvas. Even if his compositions occasionally borrow from masterpieces in art history – such as the likes of Holbein, Goya or Van Gogh – at the same time, they refer to a diverse medium repertoire, ranging from film and photography to literature, as well as to a stock of private and collective memories, everyday perception and motifs.

In an analysis of the internal state of contemporary painting, U.S. art historian David Joselit describes images as time storage spaces, the conscious perception of which could take up a lifetime. Merta’s works often span a lifetime themselves – his lifetime – by frequently making recourse to (childhood) memories. However, unlike actual time-based media, the painter enjoys the freedom of discussing time at he desires, boldly navigating in it, and creating simultaneousness apart from the necessity of normative limitation such as in the form of chronology.

In the small-format series Galerie I–IV (2006/2007), for example, Jan Merta ironically refers to an initiation experience he had as a 10-year-old schoolboy. A trip with two “worldly” friends, who promised to show him a gallery, ended at the ruins of a former open-air cinema or theatre in the periphery of his hometown Liberec. Only the overgrown foundation walls were left of the building, which had become a screen for the delirious delusion of life-size figures executed in detailed pornographic poses. Merta’s series not only manages to convey a realistic impression of the venue, but also evokes the vivid memory of the boy’s ambivalent feelings in the face of this shocking piece of art in the shimmering appearance of sketch-like animated figures in loud pink, completely unwilling to adhere to the limitations of the wall surfaces in their explicit poses.

Moreover, Galerie I-IV can be regarded as paradigmatic for the emancipated, dialectic interplay of image and text in Merta’s oeuvre. Together with the painted image, title and text generate the contents which eventually take shape only in the eye and mind of the viewer. Between the poles of images free of speech and speech free of images, the visible and the speakable form an alliance, a thought emerges in the world of painting, generating its own worlds in which previously polar opposites, such as figuration and abstraction, have become obsolete. This is also true of the paradox, face-less portrait Mann ohne Eigenschaften which allows us to recognize only blurred traits of a person shining through. However, the undefined turquoise background radiates all the more, giving the image its true ambiguous liveliness alongside the contrasting pale pink-violet tones. The reference to Robert Musil’s unfinished novel of the same title suggests a comparison between the literary work and the painting. Most likely, an analogy can be found in the multi-layered penetration of the works with their own respective biography and the congenial trick of a non-chronological understanding of time, providing both the unfinished novel and Merta’s puzzling paintings with a touch of infinity.