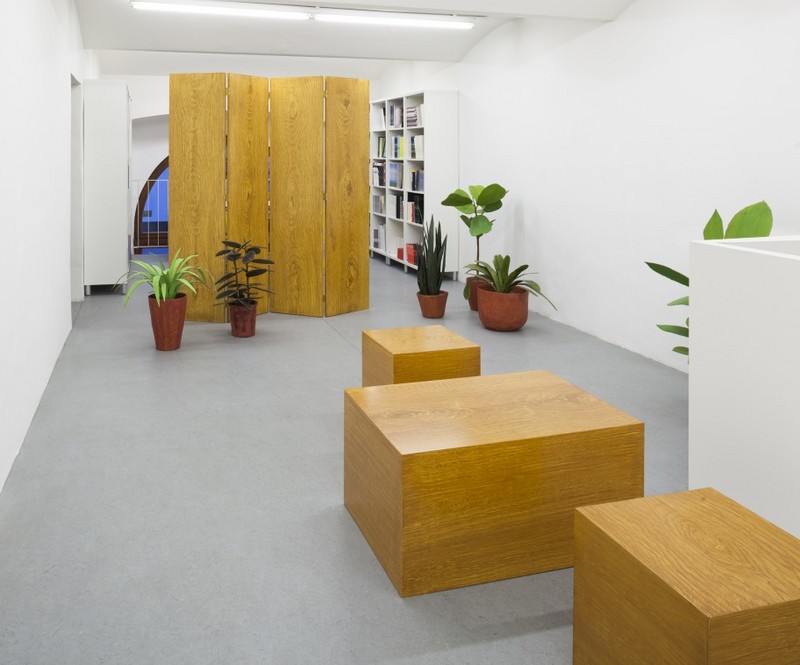 An Exhibition at Galerie Martin Janda with works at Top Kino and Ra'mien Bar.

Galerie Martin Janda is pleased to announce Jun Yang: The Gallery Show, the artist’s fourth solo exhibition at the gallery. The show will run from June 10 till July 25 2015.
Yangs works include film, installations, performances and projects in public space. The exhibition brings together works from the past 14 years and extends to Top Kino and the ra’mien bar, where selected films are being shown, supplemented by a screening and a book presentation.

We grew up believing we are the center of the world, seeing the world through the eyes we have, understanding the world through the mind and one view only – one understanding. We – I?
“’We’ and ‘I’ also describes the arc of tension in Yang’s work. His films, objects, installations, and projects revolve around individual and collective identities that are in latent conflict: in and with themselves, as well as with their environment. (...) The question of how and where individual ideas and social agendas collide and how and where they can meet connect all of Yang’s projects.“ (Barbara Steiner – full text)

Details on the works

Somewhere, 2015
Somewhere, a photo series and a video, was shot in the desert of the United Arab Emirates and is based on an APA press photograph from 2008 by the photographer Emilio Morenatti, showing a toy seller in Kabul. The colourful balloons flash a moment of hope, the vendor brings distraction and a bit of “normalcy” to the children in the war zone. It was interesting for me, because it conveyed a different image of Afghanistan and also the Arab countries, especially in the current media context. The video Somewhere is being shown for the duration of the exhibition in the Top Kino foyer.

Phantom Island, 2009
The Super-16mm film Phantom Island was made in 2009. An artificial green island with the outline of the island of Taiwan is driven through Taipei and ultimately set adrift in the sea. Only at the end of the film is it indicated that the work was filmed in the East China Sea—namely, in the area between the People’s Republic of China, Taiwan (Republic of China), and Japan. There is a specific reference to the history of Taiwan and its identity: from 1895 to 1945, the island was a Japanese colony, afterwards Taiwan became the Republic of China. To date, however, Taiwan is not recognized as a sovereign state, because the island is still claimed by the People’s Republic of China. At the same time, I wanted to show this work in the current context of the island dispute in precisely this region.

Eat Drink Art Business, 2015
This work refers to the gastronomic projects I have been working on since 2002, in the context of art institutions and business enterprises. However, Eat Drink Art Business does not document these projects, rather it concerns “visual reflections” on institutional and economic issues. Photos of the projects serve as the background—they become a red pattern—and thus also produce a visual link to the “Schnitzel Wallpaper”. History and narration are paramount.

Goldenes Zimmer, 2015
In the gallery’s entrance room, there is a golden-yellow wallpaper with Wiener Schnitzel images, which are arranged to form a repeating pattern. There is a myth that the coating of breadcrumbs originally served as an optical replacement for the expensive gold leaf, which was formerly used for the ornamentation of food. The yellow schnitzel becomes pattern and ornament, decoration and pure surface. I showed the wallpaper for the first time at The Testimony of Food exhibition in Taipei Fine Arts Museum earlier this year. For me, it is quite a cheeky homage to an Austrian success product.

The Center of the World, 2013
The protagonist of the film, shot in 2013 in Beijing, is reminiscent of a character found in commercials and television series, who represents the new, successful, urban China: a man in his thirties, who belongs to the first generation of China’s one-child policy. Today, this group of people bears an immense weight of social and societal expectations. It was important to me to make a film about success, growth, and competition in the context of China’s economic rise. On the one hand, the country is opening up, but on the other hand holds firmly to tradition for fear of losing control. During the exhibition period, The Center of the World will be shown in the ra’mien bar.

Chopsticks – how to do that, 2001
This neon work from the series coming home daily structures of life was created in 2001, when I was working on the first restaurant concept for ra’mien. It is no coincidence that the three motifs recall pictograms on chopstick wrappers that demonstrate how to eat with chopsticks: a kind of cultural manual. In the exhibition, the neon work provides a connection to the photo series Eat Drink Art Business and to the restaurant ra’mien, and it also has an advertising function.

Paris Syndrome (Indoor Plants), 2007 (ongoing)
I recreated houseplants—such as mother-in-law’s tongue and monkey puzzle tree—from cardboard. The original exotic plants are grown everywhere today and are no longer anything special. As potted plants mainly found in offices and living rooms, this is essentially an examination of domesticated nature. Therefore, one may be initially disappointed to see mass-produced goods in the exhibition, but on closer inspection they turn out to be originals with their own qualities.

Paris Syndrome is the title of a series of works that I started in 2007. They include, among others, a film, a café, a hotel, a cinema, and sculptures. The title refers to a mental disorder, which was diagnosed in Japanese women whose expectations of Paris were so deeply disappointed once there, that they suffered a kind of negative culture shock or trauma. I read about this phenomenon in 2006 and I was interested in the discrepancy between desire/longing and reality/disillusionment. There is where the series Paris Syndrome began.

Wiener Paravent, Wiener Sitzgruppe, 2015
Reproduction and pretence are addressed with the screen and the seating area on the upper floor of the gallery. They were painted by Franz Bierbaumer, a retired decorative master painter, using traditional painting and glazing technique to simulate wood grain, which is typical of the Viennese apartment buildings around 1900—for me, also a kind of golden schnitzel coating.
The seating area also serves as the setting for the first three volumes of the publication The Monograph Project (Jovis Verlag 2015), which will be presented for the first time to mark the exhibition.

Jun Yang, born 1975 in Qingtian (China) and brought up in Vienna, today divides his time between Vienna, Taipei, and Yokohama. Yang is the 25th Msgr. Otto Mauer award winner (2005). Internationally, he has participated in several biennials (Manifesta 2002, Venice 2005, Liverpool 2006, Taipei 2008, and Gwangju 2012).
On the occasion of the exhibition at Galerie Martin Janda, The Monograph Project is being published. In this first monograph by Jun Yang, edited by Barbara Steiner and designed by Oliver Klimpel, biographical writing becomes the subject of investigation. The monograph is being published in two parts, with three volumes each in 2015 and 2017.
www.martinjanda.at