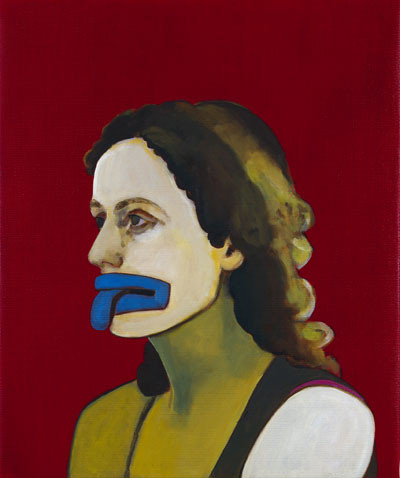 Milena Dragicevic was born in Knin (Yugoslavia) in 1965 and grew up in Canada. She currently lives in London. In this new exhibit, entitled OF ANTS, she is showing works from three new series: Tuksiarvik, Supplicants and aalliraujaq.

Tuksiarvik 8, a large-format oil painting, occupies a central position in the show. In front of a monochrome backdrop, beginning at a narrow platform, a sculptural figure works its way up. Volumetric and planar elements appear to be collaged, precariously stacked upon one another, the surfaces in relief. Some of the forms were borrowed from modernistic sculptures. The intensive green background seems – juxtaposed with the earthy shades of brown which dominate the sculpture’s color scheme - utterly artificial. The title of this piece and of the entire series is taken from the Inuit language and means “prayer site”. Dragicevic consciously employs the title for her works - its significance is not apparent at first glance. The structure of her paintings is situated somewhere between realistic form and abstraction; this is true of the titles of the works, as well.

Although the artist has worked with variations of titles and themes in the past, Supplicants is the first series which rigorously adheres to a concept. All works – the format, at 61 x 56.5 cm or 61 x 51 cm, is also predetermined – are representations of the human head, usually of friends or acquaintances, altered with small interventions. Milena Dragicevic covers the faces with geometric shapes or changes the physiognomy. She emphasizes that these are not psychological studies of the individuals who are portrayed: “The paintings are not about the models, they are 'stand-ins' for something else.” The title also makes reference to this aspect: supplicant means petitioner or beadsman.

“I see a lot of my work as a resurrection of sorts, not for sentimental or nostalgic reasons, but for survival reasons. There is so much building that exists in my process that the works can only be thought of as something for the future. The images I paint, the faces, the sculptures are like ‘stand-ins’ for something else. They are ‘stand-ins’ that in a way pay homage to a lost world or one that exists in a different realm. The Supplicants and the sculpture paintings are like lost artifacts or ones waiting to be discovered.” (Milena Dragicevic)
www.martinjanda.at