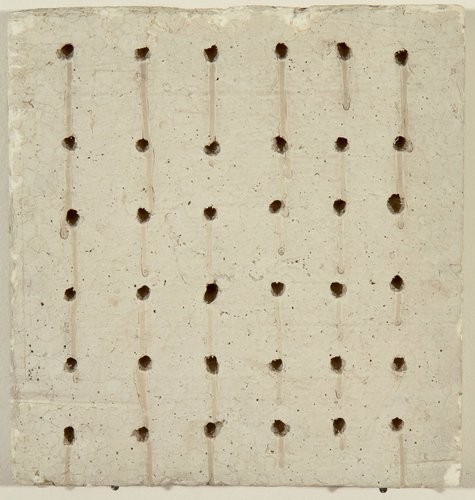 
From March 24 to April 30, 2010, Galerie Martin Janda is showing the first solo show by Svenja Deininger.
In her paintings Svenja Deininger, born 1974 in Vienna, concentrates on specific aspects, or segments of a space. The relationship to reality is not overt, yet is expressed. ˮIt is important to me that the painting can be seen as a process, when an old image surfaces like a collage, and one often cannot tell which layer is on top and which on the bottom. This is why shapes of frames often appear, and white areas suggesting light sources that usually are the pure base coat. This is how spatiality develops, not as a translation of our physical reality into painting, not as colours forming a symbolic language, but as atmosphere – that’s why they aren’t really abstract paintings.“ (Svenja Deininger)


In his second solo exhibition, Galerie Martin Janda is presenting a selection of rarely shown works by Július Koller who died in 2007, enabling a broader view on the artist’s oeuvre. In addition to photographs, objects and works on board will be shown. „Koller's work, developing for more than half a century with astonishing rigor and consequence, is by its very intransigence and incommensurability one further reason to clearly reassess what it means to talk about the other, alternative modernist art of the East.“ (Tom Holert)
A comprehensive retrospective of works by Július Koller will open in April 2010 at the Slovak National Gallery in Bratislava. Starting in 2011, an extensive exhibition is going on tour through some of the most renowned museums in Europe and America, based on new research results under the leadership of Július Koller Society.
www.martinjanda.at