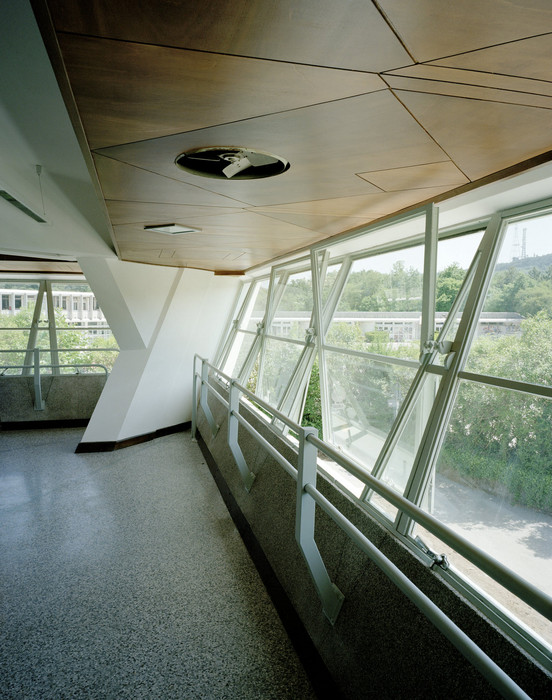 The Martin Janda Gallery is showing from 17 November 2010 to 15 January 2011 the fourth solo exhibition of Werner Feiersinger.

A reddish-brown balustrade has been diagonally inserted into the gallery’s premier showroom, obstructing, as it were, the visitor’s progress. Behind it, is a glaring black board propped up by a metallic construction.
A white, octagonal plinth steers the visitor’s gaze towards the second showroom, while next to it, a grey, ladder-like object aspires to scale some height; a small, yellow piece on the floor refers to the ground level. Werner Feiersinger, in positioning these variegated objects like signs within the exhibition space, thus opens up various planes of reference. By this process of “setting things up in relationship to one another” the artist creates a specific spatial depth and corresponding atmosphere.

“These sculptures are reminders; misremembered resemblances, like a face you might recognize but can’t quite place. Werner Feiersinger’s discrete objects may appear to be like boats, handrails, platforms, chairs, fences or ladders, but they are never exactly those things. They have a proximity to architecture and its attendant furnishings without ever becoming an illustration of, or appendage to, either. They express affinity without over-identifying, resulting in a contradictory appearance of aloofness and stability.” (Kirsty Bell)

Feiersinger frequently employs references from the mundane level of daily life, transforming and translating them. This applies equally to the reddish-brown banister, which refers back to the handrails found at the Vienna Stadium Baths. The sculpture manages to get by without specific details, its sole reference point being the surrounding space. It creates a passageway, which viewers can stride through, thus becoming, themselves, a part of the installation.
Through the special treatment he gives to his surfaces, Feiersinger eliminates the sculptures’ intrinsic weight and any sense of gravitas.

The sculptural works have been juxtaposed with two photographs. They depict buildings and constructions (in this case, a bridge in Genoa, and the interior of a children’s home in the vicinity of Trieste), whose sculptural presence fascinates the artist.
“Though it is tempting to read the photographs as an indexical reference system through which to interpret and locate the objects, the autonomy of the sculptures and their formal shifting of a generic vocabulary resist such clarity. Rather, the sculptures and photographs together produce two separate, parallel systems of articulation.” (Kirsty Bell)

In December of 2010, Werner Feiersinger’s new publication Sculptures, with an essay by Kirsty Bell, is scheduled to be published by Distanz Verlag, Berlin.

In the lower part of the gallery we will be showing a selection of works by Roman Signer.
www.martinjanda.at