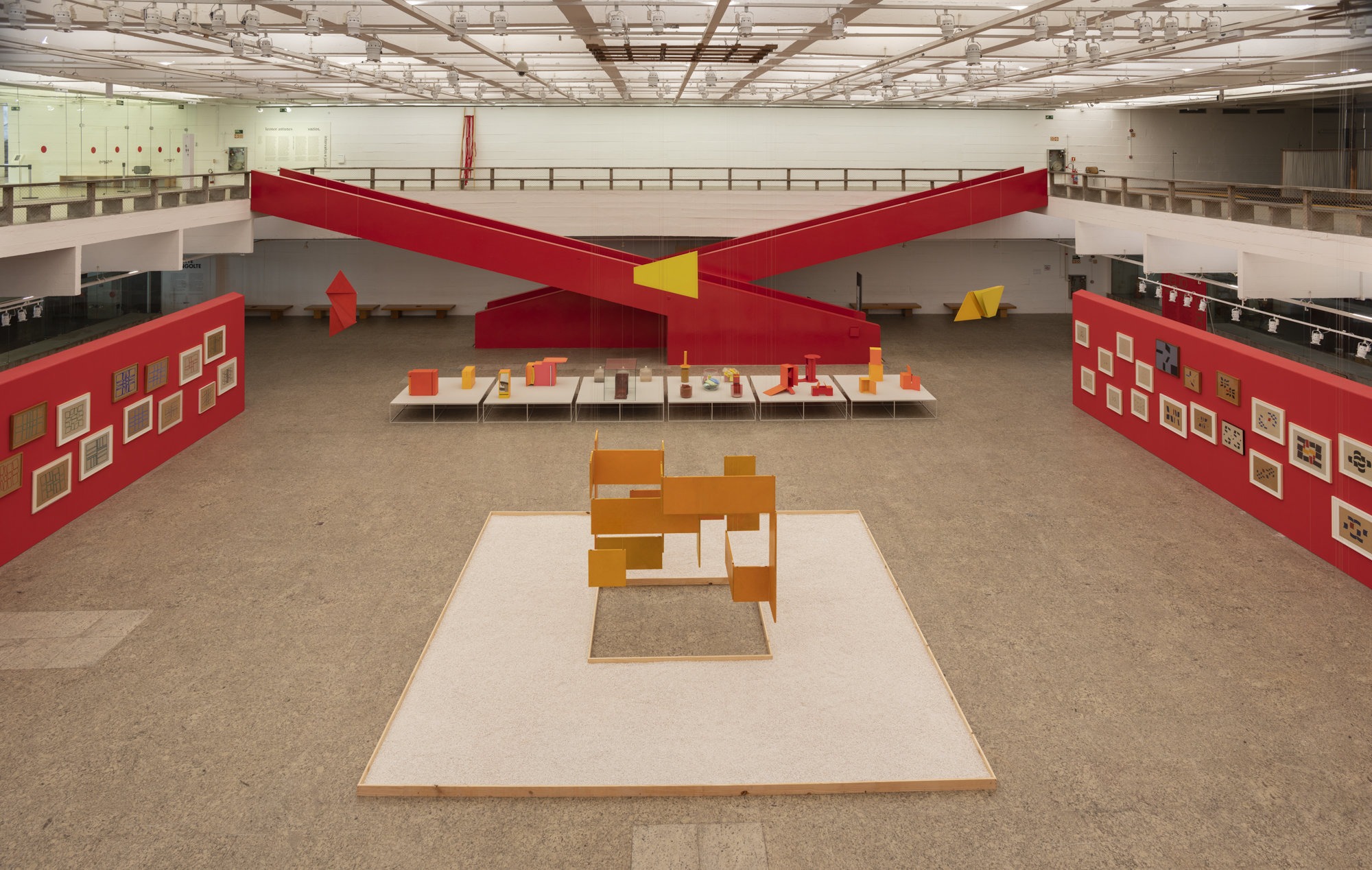 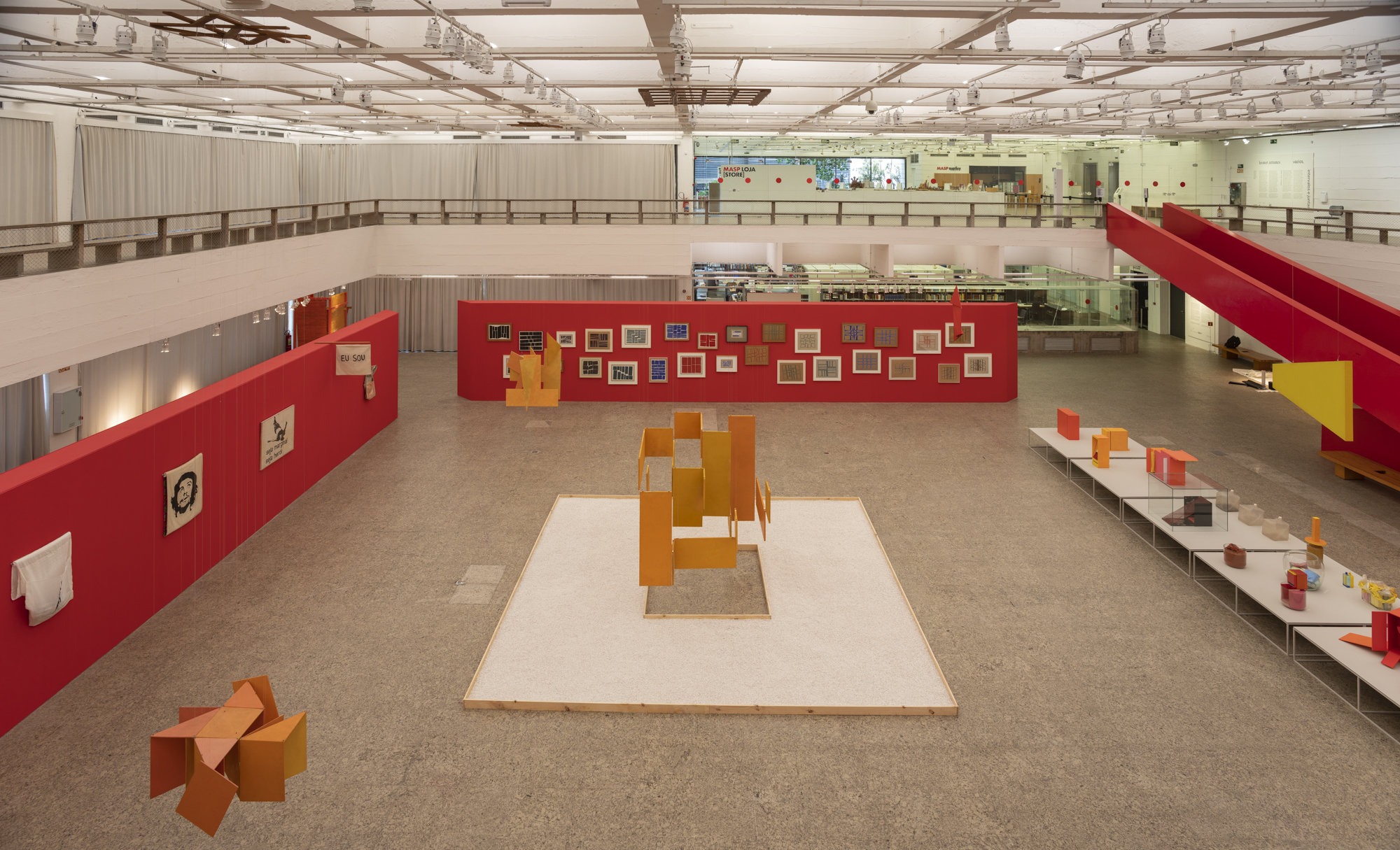 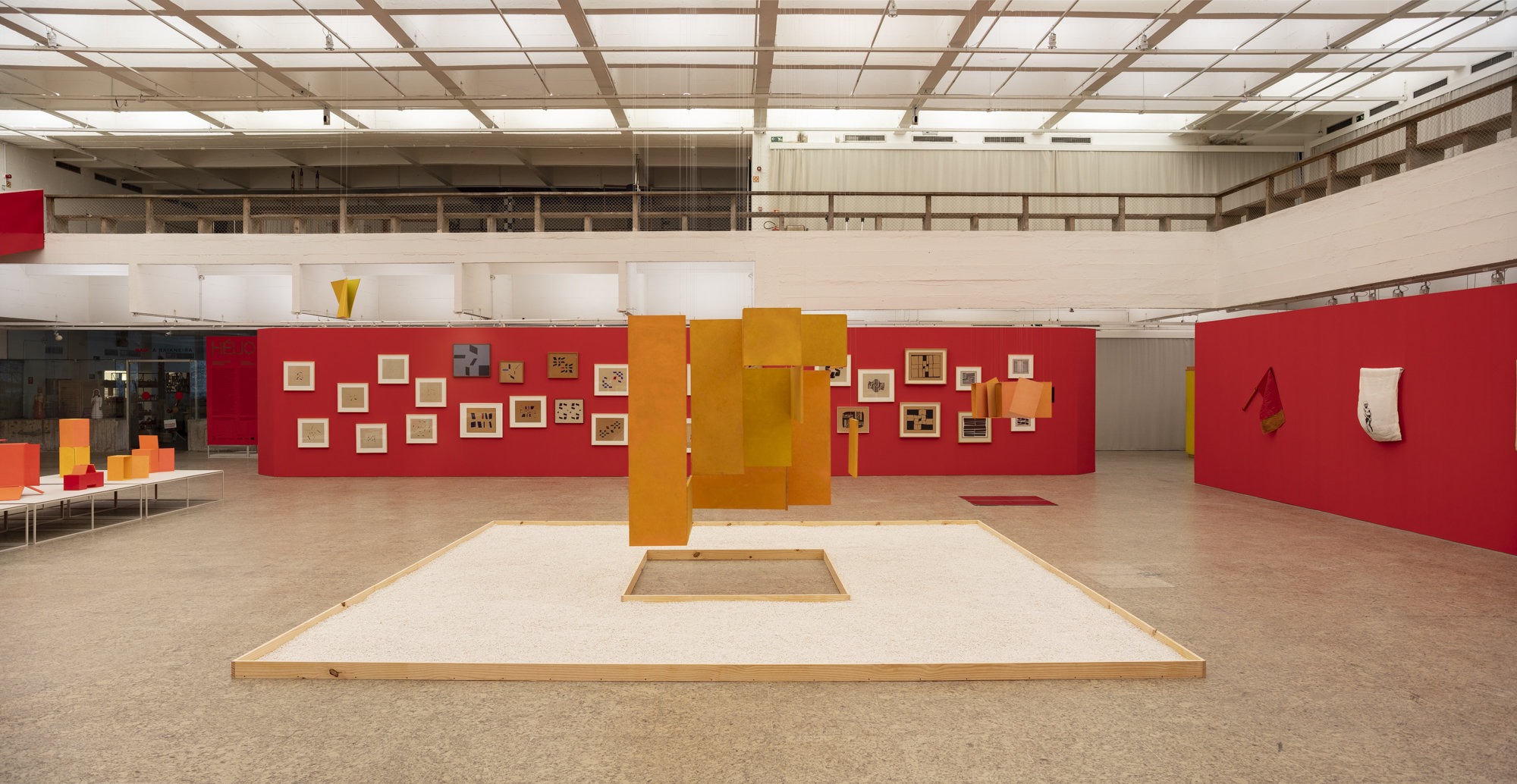 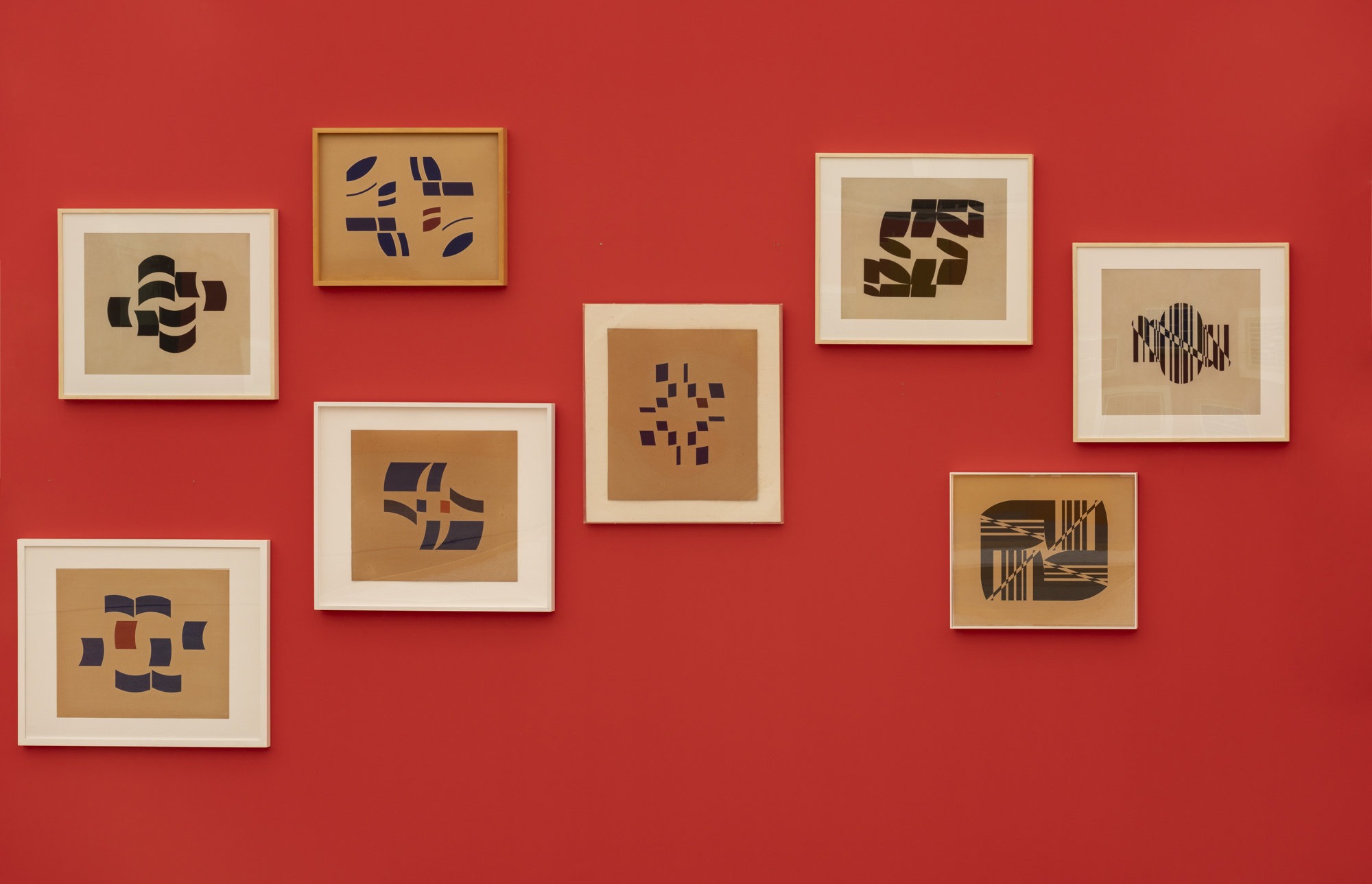 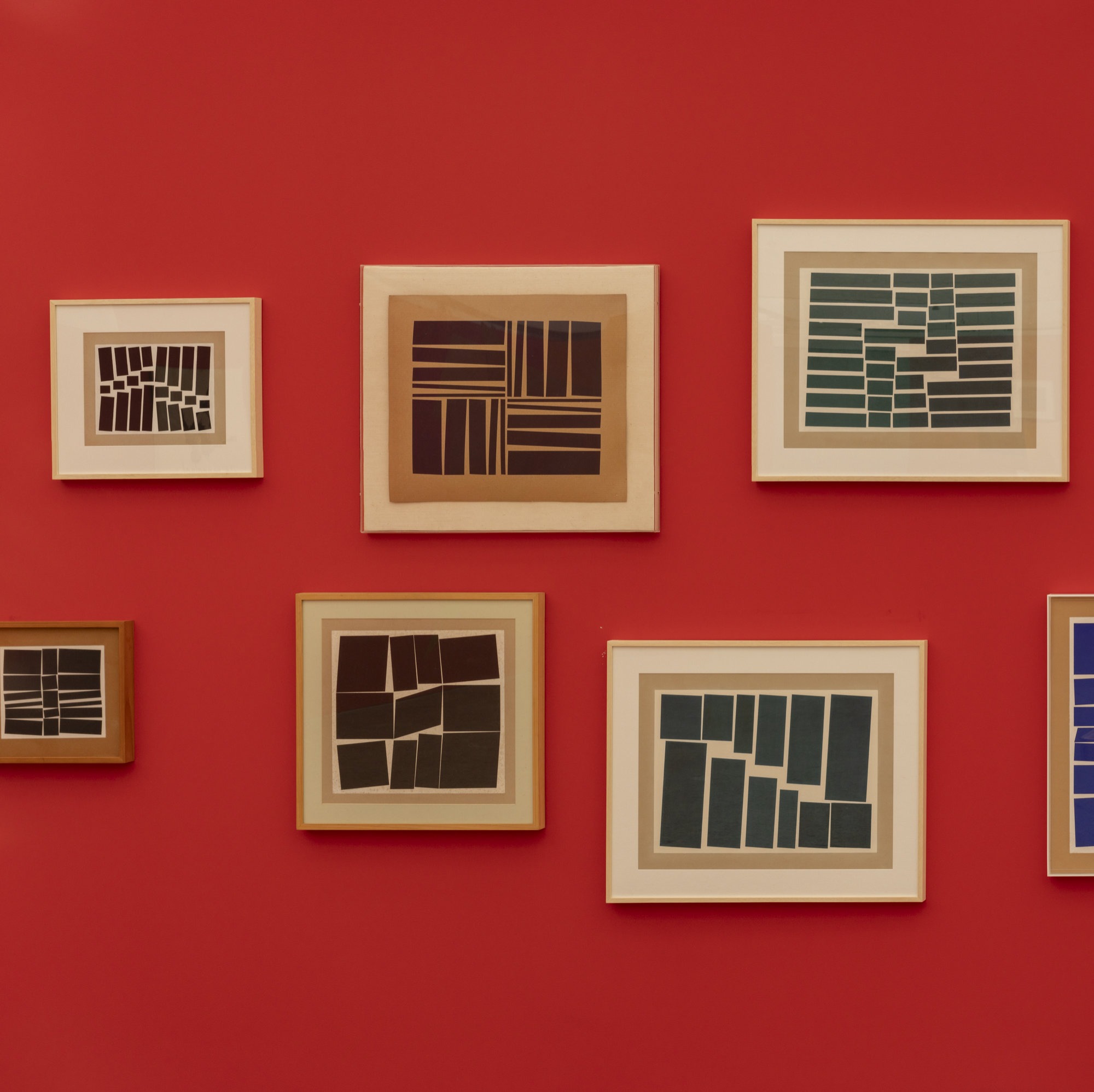 Hélio Oiticica, Dance in My Experience, exhibition view at MASP Museu de Arte de Sao Paulo, 2020, photo: Eduardo Ortega
The Museu de Arte de São Paulo (MASP) holds, for the first time, a solo show by the artist Hélio Oiticica (1937-1980). Curated by Adriano Pedrosa, MASP’s artistic director, and chief curator Tomás Toledo, Hélio Oiticica: a dança na minha experiência [Hélio Oiticica: Dance in My Experience] will run until November 22. The exhibition is a partnership with the Museu de Arte Moderna do Rio de Janeiro (MAM Rio), and it is included in the cycle “Histories of Dance,” which will guide MASP’s programming in 2020.

Inspired by Oiticica’s experimental and innovative character, the show traces an overview of the artist’s career, featuring 126 works related to rhythm, music and dance. “My interest in dance, in rhythm, in my particular case in samba, arose from a vital need for deintellectualization, for intellectual disinhibition, from the need for free expression,” Oiticica wrote in his 1965 text “A dança na minha experiência,” which lent its name to the exhibition.

Hélio Oiticica: a dança na minha experiência will present a broad selection of Parangolés. Moreover, other works will be featured under the perspective of dance and rhythm, presenting a trajectory that culminated in the Parangolé, composing a sort of genealogy of this radical work with the presentation of works from his Metaesquemas [Metaschemes], Relevos espaciais [Spatial Reliefs], Núcleos [Nuclei] and Bólides series.

The show will feature works from the artist’s periods of geometric, rhythmic and chromatic investigations, each section of the exhibition representing one of the artist’s series. The Metaschemes section will feature about 60 works, illustrations in gouache on cardboard, which explore shapes and colors and result from his involvement with concretism; the Spatial Reliefs section presents his works that resemble expanded folds and deal with questions that include the materialization of color; the Nuclei section presents larger and interactive sculptures, penetrable and manipulatable installations; while the Bólides section features works in which Oiticia explored questions such as color, solidity, emptiness, weight and transparency.

The show’s main focus will be on the Parangolés, works by Oiticica that bear a strong connection with dance and which demonstrate his close link with the Estação Primeira de Mangueira carnival club and with samba during his life. According to the artist, the Parangolés are anti-artworks. The Parangolés have the form of capes, sashes and banners constructed with colorful fabrics, sometimes with political or poetic phrases, which can be worn, carried or danced by the spectator who becomes a participant, support and performer of the work.

Moreover, three films by Ivan Cardoso will be screened: H.O., Heliorama and Helioframes, the latter of which was produced together with Oiticica.

Born in Rio de Janeiro in 1937, Hélio Oiticica began his studies at MAM Rio with Ivan Serpa, in 1954. At first, his works dialogued with the concretist experiments of that time. The artist participated in the Grupo Frente in 1955 in 1956, and cofounded the Grupo Neoconcreto, in 1959. From then on, Oiticica established the body as the motor of his work, which was also opened to the context of the street and to daily life, pointing to a relationship between art and life. For him, the spectator was a true participator who circulated through and experienced the artwork, rather than having a mere contemplative posture. In that period, the artist created some of his most important works, such as the Bilaterais [Bilaterals], Relevos Espaciais, Núcleos, Penetráveis [Penetrables] and Bólides.

In 1964, Oiticica began to attend sessions of the Estação Primeira de Mangueira carnival club, in Rio de Janeiro, becoming one of the club’s paraders – a turning point in the artist’s life. This activity led to a deepening of his reflections on aesthetic experience beyond the visual arts, incorporating bodily and sensible relationships into his work through dance and rhythm.

In 1965, Oiticica participated in the exhibition Opinião 65, at the Museu de Arte Moderna of Rio de Janeiro, considered a milestone in the history of Brazilian art. It was the first time that he presented the Parangolés. The capes were used by the artist and by samba dancers and musicians of Mangueira, who arrived at MAM Rio in a sort of “festive procession.” Barred from entering, they held the “party-artwork” in the area outside the museum. Two years later, in 1967, Oiticica returned to MAM Rio in the exhibition Nova Objetividade Brasileira and presented the Tropicália penetrable whose path, according to the artist, closely resembled the pathways in the favela. This experimental and critical artwork inspired the name of the 1968 record by Caetano Veloso and Gilberto Gil and that of the important artistic and cultural movement led by the Bahians.


That same year, in the most repressive period of Brazil’s military dictatorship, Caetano showed the flag designed by Oiticica “Seja marginal seja herói” [Be an outlaw, be a hero] in a show at the Sucata nightclub, in Rio de Janeiro. The flag was confiscated by the Federal Police who shut down the show. The artist appeared on the international scene for the first time in 1969: at the solo show Whitechapel Experience at Whitechapel Gallery in London, curated by critic Guy Brett. In the following years he also showed at the Museum of Modern Art of New York, and Rhode Island University, and at the group event Latin American Fair of Opinion, at Saint Clement’s Church of New York.

In the 1970s, Hélio Oiticica lived mainly in New York, as the recipient of a Guggenheim Foundation fellowship. In that period, he made experiments with films in Super-8 format and dozens of environmental projects, such as the Cosmococas, in partnership with Neville D’Almeida. These creations were part of what the artist called “quasi-cinema” [quasi-cinema], putting the body into a situation of immersion within the image. In 1978, Oiticica returned to Brazil, dedicating himself to various group events and exhibitions. The artist died after suffering a stroke in March 1980.

In 1992 a retrospective of his work was held at Witte de With Center for Contemporary Art, in Rotterdam (Holland), which traveled to Paris, Barcelona, Lisbon, Minneapolis and Rio de Janeiro. The show firmly established Oiticica as one of the most highly recognized Brazilian artists on the international scene, making him an obligatory reference for the reading and legitimation of Brazilian art, on the part of critics, the market and artists.

Catalog: Edited by curators Adriano Pedrosa and Tomás Toledo, the illustrated catalog will have essays by Adrian Anagnost, André Lepecki, Cristina Ricupero, Evan Moffitt, Fernanda Lopes, Fernando Cocchiarale, Sergio Delgado Moya, Tania Rivera and Vivian Crockett, as well as by Pedrosa and Toledo. The publication will also include a biographical note by Fernanda Lopes and extensive documentary material, including photographs and writings by the artist, who had the habit of writing down his reflections about art and his production (R$ 139). Graphic design by Bloco Gráfico.
masp.art.br