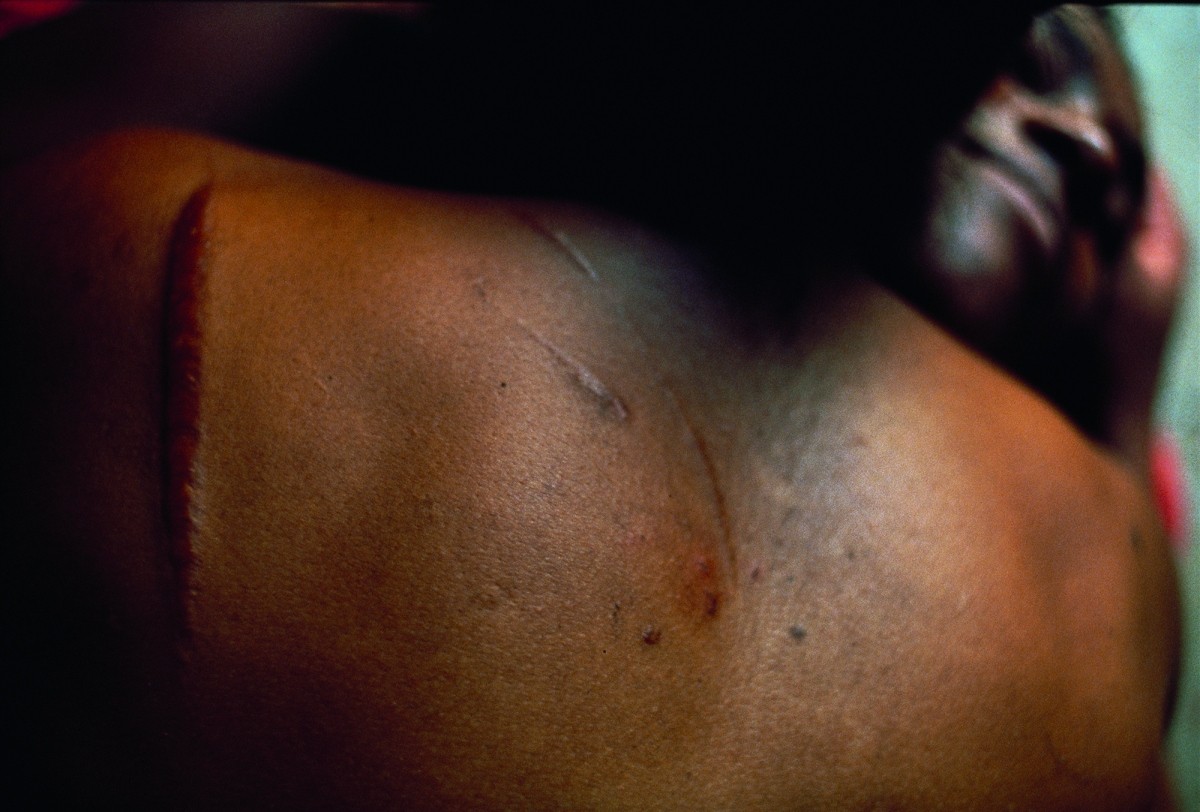 This exhibition features 61 photographs from the series Maciel, produced in 1979 by Miguel Rio Branco in an area of prostitution known as the neighborhood of Maciel in the district of Pelourinho, Salvador, Bahia. This is the largest presentation of the series to date, featuring a selection being shown here for the first time.
Whn [sic] I die I will take nothing, those who owe my [sic] I will charge in hell is a phrase that Rio Branco captured on a wall inside a house in the neighborhood of Maciel. This sentence with a prophetic tone offers a key for understanding the world of this area of Pelourinho, abandoned for decades by the public power and known for being a place of prostitution and criminality as well as a dwelling place for marginalized populations. For months, Rio Branco frequented Maciel and established a link of affinity and affection with the people he portrayed there - just as was also done by Henri de Toulouse-Lautrec (1864 -1901) in the late-19th-century Parisian brothels that he depicted. Rio Branco began by making a pact with the people he portrayed: that the images would not be shown in Salvador, thus ensuring a closer and franker relationship and allowing the proud and resolute attitude of the characters to gain protagonism and power in the images.
The exhibition is organized on four walls, each of which emphasizes determined aspects of Rio Branco`s work. On the first wall, we have the photograph that captures the phrase that lends the show its title, as well as various street scenes in which the state of deterioration of the buildings dialogues with the uses the inhabitants make of them. On the second wall there is a greater presence of sex, in portraits and scenes of nudity that take place within the buildings. On the third wall, we observe the photographs shot from the inside outward, or from the outside inward, of bars, houses and brothels. Interior scenes once again dominate the photographs on the exhibition`s fourth wall, recording complex montages made with magazine images within the zone, establishing relationships between the people photographed and other representations of sex and of the woman.

Part of MASP`s axis of programming with shows around the themes of sexuality and gender, the exhibition of photographs by Miguel Rio Branco dialogues directly with the exhibition Toulouse-Lautrec in red, located in the gallery on the museum`s first floor, and with Tracey Moffatt: Montage, being held in the video room on the museum`s second sub-level.
masp.art.br