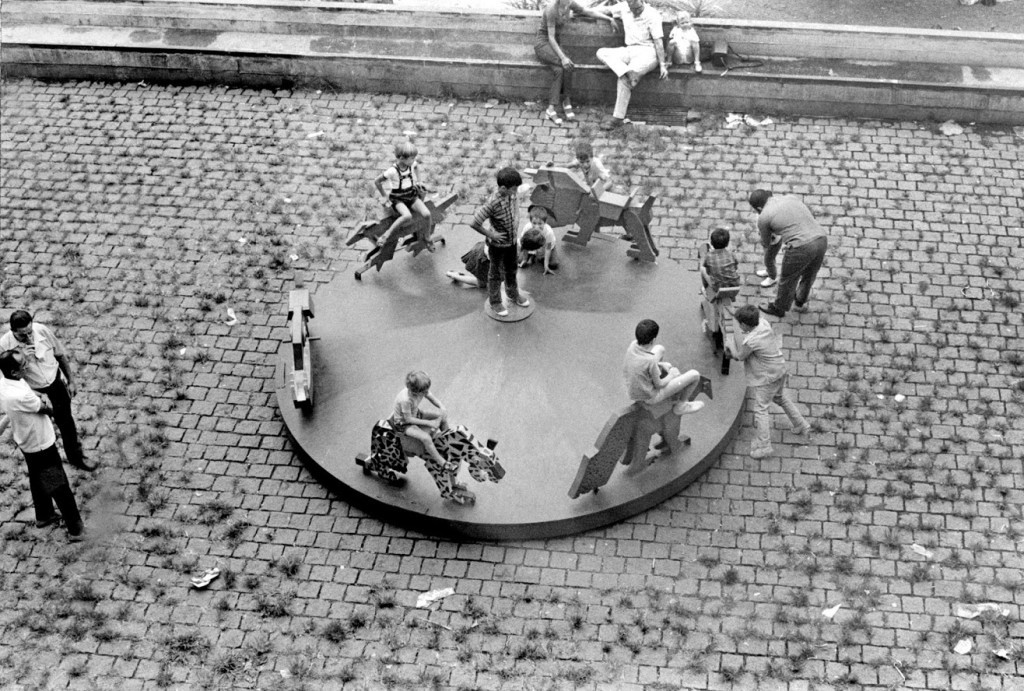 Maria Helena Chartuni, Carousel
MASP Library and Documentation Centre
Photo by Luiz Hossaka
I sought, at the Museu de Arte de São Paulo, to resume certain positions. I sought (and hope it happens) to re-create an “environment” at Trianon. And I would like the public to go there, to see exhibitions in the open air and to discuss, listen to music, watch films. I would like children to play in the morning and afternoon sun. — LINA BO BARDI, 1967

At Leirner’s show, in 1969, the year that MASP was opened to the public on Avenida Paulista, the artist occupied the ground-level plaza beneath the building’s clear span — a hybrid, borderline space of transition, since it is under the museum’s building but administered by the city government. Playgrounds (1969) included a series of participative works set up in the open air, activating the street and the urban space, blurring the borders between art and life, the museum and its exterior.

The word “playground” is also used in Portuguese to denote an area in a city, at a school, or in a building that has recreational equipment for children to play on. In English, the word “play” includes the senses of playing a role, a musical instrument or a video, while “ground” can denote an area (“grounds”) or the earth itself. Understanding the space of art as a playground requires us to consider all of these senses, articulating and opening them up to others. In this context, Playgrounds 2016 seeks to recover the dimension of engagement and experience with art in an enlarged and liberating way, allowing for the manifestation of collective life in the city and in the museum. This aspect is also present in the idea of the museum through Lina Bo Bardi’s architecture. In one of her drawings for the museum, Esculturas praticáveis do Belvedere, Museu Arte Trianon [Practical Sculptures for the Belvedere, Museu Arte Trianon], the artist portrays the area under the clear span as a playground for children. With this proposal, the museum would become a living, dynamic organism, where the children (as well as adults) could access it and get to know its collection with curiosity and autonomy.

Playgrounds 2016, held in the public square under MASP’s clear span, as well as in the second basement level and on the mezzanine of the first basement level, unites the museum’s mediation and exhibition programs while also dialoguing with the exhibition Histórias da infância [Stories of Childhood], beginning April 7. Through art, playfulness and games it is possible to imagine new ways of living together and learning. Education takes place throughout the museum, understood as also being an environment of exchange and transformation of everyone and everything involved: artists, artworks, the museum and its publics.