Are You Glad to Be in America? 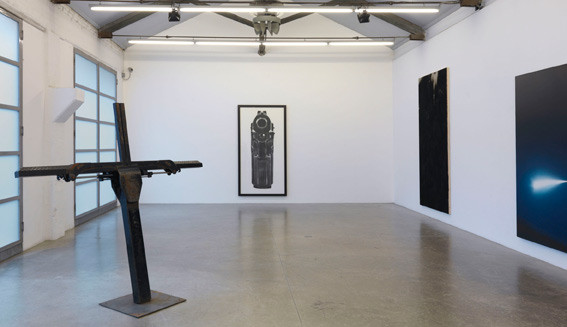 The 15th February 2011 Massimo De Carlo opens the group show Are You Glad to Be in America? Using the title of the renowned 1980 album of James Blood Ulmer, the group show offers a global view of American society, of its contradictions, culture and symbols.


Jack Goldstein (born in Montreal, Canada, in 1945. Died in San Bernardino, California in 2003) has been one of the most important New York artists of the 1970’s and for the whole following decade. In the ‘90’s the artist retired in California up to his participation in the group show Artist Once-Removed at the Künstlerhaus Stuttgart in 1999. In 2002 the New York Whitney Museum organises his solo exhibition but the following year the artist commits suicide in California.

Glenn Ligon (born in New York in 1964) has concentrated his research on the themes of race and identity in the contemporary culture, making use of photography, painting and writing. His works have been exhibited in international institutions and events, among which the Museum of Modern Art, New York (2010), the Reina Sofia, Madrid (2010), the Art Institute of Chicago (2009), the CCA Wattis Institute for Contemporary Arts, San Francisco (2008), and the Rubell Family Collection, Miami (2008). Glenn Ligon is the youngest artist exhibiting his works in the White House’s collection, chosen by President Barak Obama. The 10th March 2011 the New York Whitney Museum will open his next solo show.

Robert Longo (born in Brooklyn New York, in 1953) has established himself in the New York’s cultural and artistic field of the ‘80’s, in the time of Jeff Koons, Jean Michel Basquiat and Peter Halley. His works, with a strong visual and media impact, have been exhibited at the Museu Berardo, Lisbon (2010); the Metropolitan Museum of Art, New York and the Kunstmuseum, Stuttgart (2009); Museion - Museum of Modern and Contemporary Art, Bolzano, P.S.1 Contemporary Art Center, New York, Museum of Contemporary Art, Chicago (2008); Musée D’Art Contemporain, Montréal and KW Institute for Contemporary Art, Berlin (2007). In 1995 Robert Longo directed Keanu Reeves in the science fiction film Johnny Mnemonic.

Nate Lowman (born in New York in 1979) is one of the prominent characters of young American art. After having participated to the group exhibition Unmonumental at the New Museum in New York in 2007, he captured the public and critics’ attention. His works have been described as “a complex journey in collage, graffiti and appropriation”. He has shown at the Palais de Tokyo, Paris, the Solomon R. Guggenheim, New York, the Whitney Museum, New York (2010); Palazzo Grassi and Punta della Dogana, Venice, the MACRO Future, Rome, the Rubell Family Collection, Miami, the Astrup Fearnley Museet for Moderne Kunst, Oslo (2009 and 2008).

Steven Parrino (born in New York in 1958. Died the night of the 31st December 2004 in New York) started to make his way in New York towards the end of the ‘70’s. Starting from Abstractionism and Minimalism, the artist’s production is divided between monochrome canvases in which he concentrates on the idea of the content of the surface, and, on the other hand, works in which the canvas is tortured, folded and torn. His works have been exhibited at Le Magasin, Grenoble (2008), at the Whitney Biennial, 2006, at the Palais de Tokyo, Paris (2006), the P.S.1 Contemporary Art Center, New York, (2005) and at MAMCO, Geneva (2004).

Richard Prince (born in Panama in 1949) moves to New York in 1974 where he is recruited by Time-Life magazine in the archivist department: here he takes his chance to start collecting pieces of advertisements. In 1977 he commits to an activity based on photographic reproduction, reprographics, refining the techniques of cutting and reframing, which will become his author mark. In 1992 the Whitney Museum of New York organised his first solo show that has later on been exhibited in the Museums of Düsseldorf, San Francisco and Rotterdam. Amongst his most recent solo shows is Continuation, Serpentine Gallery, London, 2008 and Spiritual America at the Solomon R. Guggenheim Museum in New York; in 2007 Canaries in the Coal Mine at the Astrup Fearnley Museet for Moderne Kunst, Oslo and Fugitive Artist: The Early Work of Richard Prince, 1974-77 at the Neuberger Museum of Art, New York. He participated at the Venice Biennale in 2007, representing Panama in the National Pavilion’s section.

Marianne Vitale (born in New York in 1973) works without distinction with sculpture, video, theatre and design. In her sculptures the artist assembles different reclaimed materials and found objects, creating new imaginary worlds, through narrations that change continuously. Her works have been exhibited at the 2010 Whitney Biennial, at the Rubell Family Collection, Miami (2010), at the Sculpture Center, New York (2009), the NADA Art Fair, Miami (2008), the Tensta Konsthall, Stockholm (2007) and at White Columns, New York (2007).
www.massimodecarlo.com