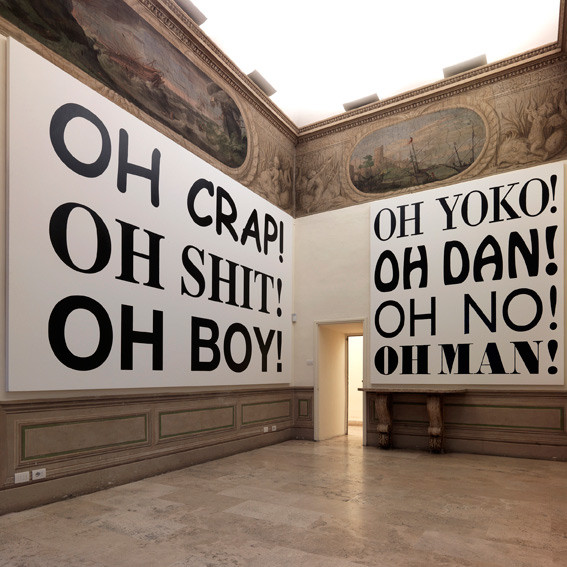 Dan Colen’s work has incorporated text in various forms since its beginning. He began to put language to use in trompe l’oeil panel paintings and sculptures simulating graffitied walls and scrappy teen hangout spots. Phrases like “Holy Shit”, “Sha Na Na Hey Hey” and “Zippa-dee-doo-da” unlock a familiar feeling in their audience: vernacular speech gives rise to the vernacular experience of our youth. Colen’s subsequent candle painting series also invokes text; in these hyper-detailed oil paintings, each depicting Geppeto’s work table from the Disney classic Pinocchio, smoke rising from a just-extinguished candle spells out various phrases: “Holy Moly,” “Going, going, gone”. Again, the text serves as symbolic device, prompting viewers to contemplate the ephemeral fact of our lives and the faith that inspiration will deliver us from that finality (whether by creativity or devastation).

In 2009 Colen began a series of works on paper scattered with cartoon pin-up girls (many again with a Disney quality) all cooing “Oh Dan!” Instead of the more communal sense of linguistic experience, these pieces evoke the Pygmalion fantasy – the artist’s self-reflexive and even obsessive relationship to his artworks, which are seen simultaneously as muses and objects of desire by their creator. Here the conversation overtly occurs between artist and art object, leaving the audience as third-axis observer. These shifting artist-artwork-viewer dynamics are at the heart of the Colen’s use of language; which reacts to which? Which inspires which?

In this new body of black and white text works, many of them monumental in scale, Colen redirects the exchange yet again. This time it is the paintings that seem to react to the viewers, exclaiming in their various fonts, “OH!” as if caught in some startling act by their beholder. Within the rooms of the historic Palazzo Rospigliosi, painted in the 17th Century with ceiling frescos of three mythical rape scenes, the paintings become hyperbolic expressions of their classical surroundings. As evidenced in the extraordinary paintings in the Palazzo, mythology is full of spurned Gods taking what they want by force in dramatic and consequential visual moments. In Colen’s text paintings, the awe-inspiring moment has just taken place before the viewer’s arrival – all we are left with is the exclamatory and ecstatic power of release.

Dan Colen was born in Leonia, New Jersey, in 1979. Lives and works in New York. His works have been acquired by the Whitney Museum of Contemporary Art in New York, by the Saatchi Gallery in London and by the Astrup Fearnley Museum of Modern Art, Oslo. He has participated in many exhibitions: 2010 Skin Fruit: Selections from the Dakis Joannou Collection, curated by Jeff Koons at the New Museum, New York (2010); Abstract America: New Painting and Sculpture, Saatchi Gallery, London (2009); New York Minute: 60 Artisti della scena newyorchese at the MACRO Future, Rome (2009). He took part in the 2006 Whitney Biennial. The 21st January 2011 the Astrup Fearnley Museum of Modern Art, Oslo opened Peanuts, his first solo show in a European museum.

The exhibition Oh god! by Dan Colen is part of Three Amigos, a project by Massimo De Carlo which includes three different solo shows in Rome by Nate Lowman (at the American Academy in Rome, Via Angelo Masina 5 – until 11.10.2011) and Dash Snow (at MACRO, Via Nizza 138 – until 11.12.2011).
www.massimodecarlo.com