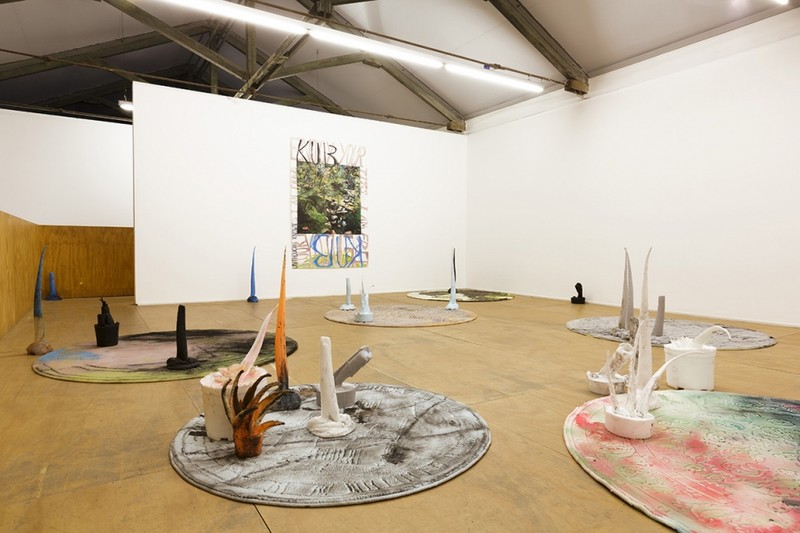 Massimo De Carlo gallery in Milan inaugurates its new season with Sleep With the Key, the first solo exhibition in Italy by artist Kaari Upson. The artist’s universe is an archive of human inner feelings animated by unfathomable entities, shadows and ghosts. Action and reaction seem to overlap in the kaleidoscopic and yet obscure world of Kaari Upson. With a stream of consciousness that continuously blurs reality and fantasy, public and private, the Self and the Other, the Californian artist investigates the mysteries of the human experience.
Sleep With the Key is an open window to Kaari Upson’s interior world, which unclenches the memory of passed happy moments, jealously locked into the artist’s heart.

The series of brand new works in Sleep With the Key summarize the last years of the artist’s research and build a carnal universe in negative: Kaari Upson’s exhibition is a project about absence, separation, and loss. Sleep With the Key is a show about the body, where the body never appears.

Sleep With the Key starts with a monumental group of unique silicon mattresses. The molds for the mattresses are found by the artist in the streets of Los Angeles. King size, Queen size, Single and Crib size mattresses appear through multiple layers of transparent or colored liquid silicone, with a production process that escapes the artist’s absolute control. The objects’ surfaces are enriched by unexpected shadows. Going from a liquid to a solid state, the silicone catches Kaari Upson’s thoughts and returns fleshy and sensual color fields, thus producing a perfect synthesis between Reason and Unconscious.

On the second floor Kaari Upson presents a series of rugs, also made in silicone, and some compositions of aloe plants’ casts; specular and undefined compositions, abstract decorations and colour dripping get, nestled into the fibres of these seductive surfaces that, while crystallizing a moment in time, continue to underline the absence of the human being. Up one of the walls, a window opens onto an ideal landscape, a meditative space in which to project one’s self.

Kaari Upson’s works look apparently familiar to us. They appear as everyday objects yet nevertheless they give us a sense of turmoil, instability and perversion. Hidden deeply into the human spirit, our most unmentionable dreams emerge from the translucent surfaces and the mysterious physicality of Upson’s works. “The uncanny is something that can be familiar, yet foreign at the same time, resulting in a feeling of it being uncomfortably strange or uncomfortably familiar.” (The Uncanny, Sigmund Freud, 1919).