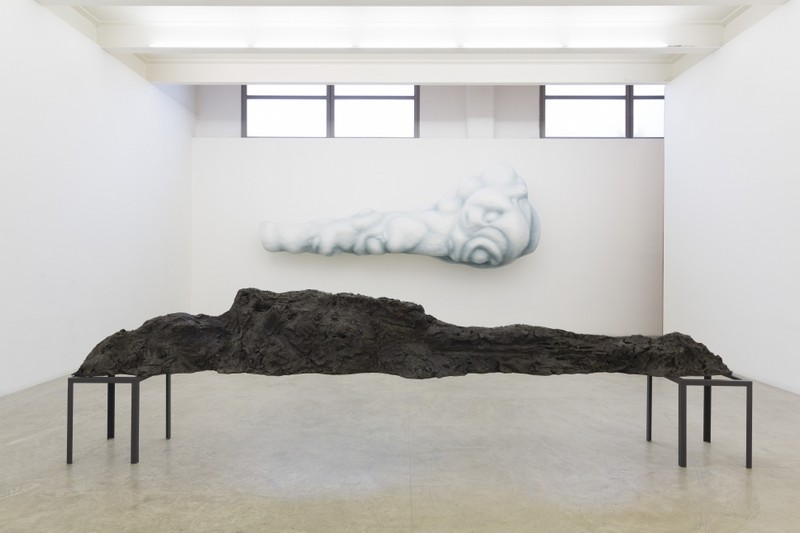 The landscape is a recurring theme in the work of Massimo Bartolini: intended as a meditative space, hence of exclusion, and also as the space that generates abstraction.
In the exhibition Paesaggi Massimo Bartolini presents for the first time in his career a series of acrylic paintings. The subjects of these new paintings are mountain landscapes that originate from the outline of a series of monuments, mostly located in Philadelphia.
In this series Bartolini transforms the monuments from vertical to horizontal, eliminating the objects suggestion of the presence of a contour and of the shades of the mountains.
This process reminds the viewer of certain images of shot down monuments that crumble when they fall; they are de-anthropized and go back to being just stones, mountains and nature
The artist seems to invert the Michelangelo inspired process where an image is extracted from the rock: in these works the image is instead forced back into the rock.

The idea of metamorphosis is found in every work in the show. These acrylic paintings where statues become mountains, as if they were human figures that have lost their posture bring to mind Gregor Samsa of Kafka’s iconic Metamorphosis, with whom they share the same aspect of a solitary island in a familiar and amusing environment: only their title serving as a clue to trace back their origin. (Rocky, The Shade, Wayne).

The notion of the metamorphosis of an object situated in a landscape guides another of the works in the exhibition, called Cloud’s Club: the work is a great bait of papier-mâché, created by the artisans that make the floats for Viareggio’s famous carnival, is inspired by a 1600 garden statue of Hercules. The object is here enlarged and built with a new material, becoming a cloud that floats by hanging on a wall, a harmless and quirky weapon.

Alongside Cloud’s Club is a bronze sculpture, that has the shape of a mountain or of a corpse, entitled Giacometti Landscape, being the result of Bartolini’s shot-down monument process inspired by Femme de Venise 1 by Alberto Giacometti.

In the show there are variations of the artists historical works, the Rugiade, that suggest a more physical rather than meditative experience of the landscape: the paintings change colour according to the viewers position in the room, and so does the wet and dewy surface of the canvas. Here the landscape knocks on our window and mimics its own presence by stating: “ I am here”.