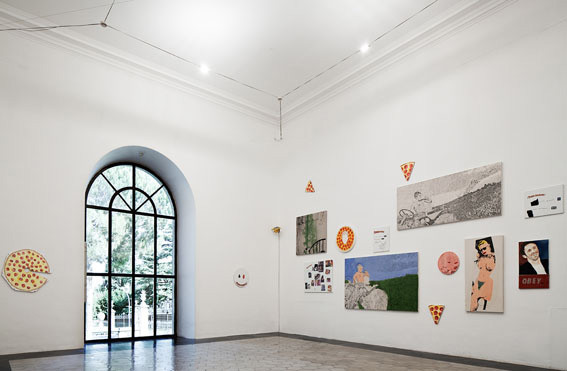 How do you picture absence? Traces reappear in different forms in Nate Lowman's Three Amigos: Gift Ghost GAP. A plastic tabletop shows multicolored rings of remnant pigment from open jars of paint that were once placed there. Presence and absence both exclude and stick to one another, like two sides of the same coin. Lengths of canvas dropcloth that were laid on the studio floor are raised on stretcher bars and hung upright, suddenly becoming active works after a long period of passive receptivity. Points in time are marked by dripped and spilled paint, sneaker footprints, and areas of color that spread over from the making of other artworks. Those long-gone artworks are replaced by this new work, which displays their leftover residue, floating stains, levitating imprints, and indiscernible filth.

Three Amigos: Gift Ghost GAP. Three words are linked by their first letter, an instance of alliteration, repeated sounds existing in confirmed but loosely defined relation to one another. The phrase goes out with a "stolen" word (GAP), which also literally means an unfilled space, vacant, something missing...fill in the blank.

Some paintings here depict literal instances of absence or removal, such as an "illegally beautiful" airbrushed photo of Julia Roberts that was revoked from advertisements after a politician criticized its heavy retouching; or a headline announcing the acquisition of an updated prosthetic limb for Bethany Hamilton, the teen surfer who survived a shark attack that cost her an arm. These stories conclude with a blank: although we recognize Julia in the photo, her image was ruled not to be a true likeness, and Bethany has a new "arm", but it cannot be a real arm.

Nate Lowman's production dips into the general and ineffable flow of image distribution. In the news, the unique is captured and proliferated; in his work, the proliferate is captured and made unique. He reuses certain images, like the US $20 bill folded to reveal a diabolical vignette of the World Trade Center collapsing, or the bare-breasted photo of OJ Simpson's wife Nicole Brown Simpson which was sold to a tabloid by her own sister after her murder for a reported $32,500. One is an image of distinct national horror secretly emblematized within a ubiquitous national token; the other is a symbol of violent doom and public betrayal extending into the afterlife, distilled into the image of one woman. Both are heralds of implicit disaster, conspiracy, and gruesome death.

The threat of raw exposure is calmed by distance: hot topics cool off, then get removed, burned into a Xerox and projected back out, onto the canvas. Lurking aggression reformulated as innocent mischief can coexist with aching loneliness or a vacant but real grin of optimism. Blank doesn't have to mean empty and space doesn't have to be negative. And there's pizza here: a perfect circle to be dematerialized slice by slice, a pleasurable and lighthearted ritual of egalitarian consumption and camaraderie.

The paintings in Three Amigos: Gift Ghost GAP connect softly to the border between living and dead. A lamp, part of a curtain - taken from the edges of a photo from a famous death scene, the Heaven's Gate cult mass suicide - are painted onto sections of used dropcloth. Vivid, frozen faces of beautiful people - more or less unreal as the Julia Roberts photo - stare out from the covers of a row of magazines. Disembodied Carnival masks smile. Fine dots of black paint soak into white linen so thin that the wooden stretcher bars are visible beneath. Semi-transparency blends into semi-opacity.

Like other formats that are characterized by inherent absences - crossword puzzles, Mad Libs, pin-the-tail-on-the-donkey, knock-knock jokes, connect-the-dots - an exhibition could be a sort of blank to be filled in. It comes in pieces and requires assembly: items included or omitted, spaces filled or not filled, and parts which may join one another but do not always equal a whole. Another work depicts a snowman with a tripartite body holding its own head in its twig hands, its cute mouth-hole fixed in a scream of fear. Paradoxical and ridiculous, mocking and desperate, it's stuck forever, flagrantly on the edge of vanishing.

The exhibition by Nate Lowman is part of Three Amigos, a project by Massimo De Carlo which includes three different solo shows in Rome by Dan Colen (Palazzo Rospigliosi, Via XXIV Maggio 43 - until 9.10.2011) and Dash Snow (MACRO, via Nizza 138, Roma - until 11.12.2011).
www.massimodecarlo.com