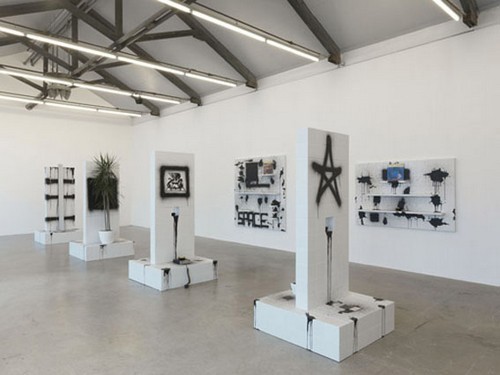 On 25th November Galleria Massimo De Carlo will host 25 days after October, the first Rashid Johnson’s solo exhibition held in Via Ventura in Milan. One of the most interesting American young artists, Johnson has created a new series of sculptures.

In the first room the artist exhibits three wall sculptures reproducing the plans of the houses of William Faulkner (1897 – 1962), Bertrand Russell (1872 – 1970) and William Edward Burghardt Du Bois (1868 – 1963), better known as W.E.B. Du Bois. The three intellectuals, politically involved in different fields, spent their lives preaching peace and equality and dealt with the same themes the artist holds dear. Through his works Rashid Johnson reflects on his cultural and racial identity, restoring elements from world literature, history of art, Afro-American culture, from mysticism and cosmology. The use of different materials, such as black wax, wood, ceramic and of everyday life objects like small bowls, books, records and plants, allows him to develop stories through an utterly inner and personal language: the artist imagines that the three authors talk to each other as if they were in a sitting-room where an ancient rug functions as a meeting point.

In the second room on the upper floor, Rashid Johnson exhibits another series of wall and tutto tondo sculptures, using white, opaque tiles that recall the finishing of a public toilet; the spray paint and the black wax add an undeground touch, typical of the new American artistic expression. The sculptures are conceived as monuments the visitors can sit on, or as portals one can look through, or better, “run” towards one own’s future, as Johnson himself wrote on one of them.

What happened 25 days after October? The artist doesn’t offer a specific answer. He may refer to October Revolution in 1917, to a film by Eisenstein about those ten days that upset the world, to the art criticism and theory magazine October, or just to the date of his exhibition, the artist reasons out present time, post-revolutionary contemporary world of which he offers us a multitude of suggestions, clues and hints and in which the observer can’t do anything but get lost.

Born in Chicago in 1977, the artist lives and works in New York. His works are part of Don and Mera Rubell, of the Museum of Contemporary Art of Chicago, of Whitney Museum of American Art of New York and of the Brooklyn Art Museum collections. Among his solo exhibitions are Smoke and Mirrors at the Sculpture Center of Long Island City (2009), The Dead Lecturer: Laboratory, Dojo, and Performance Space at the Power House in Memphis (2009), Sharpening My Oyster Knife at Kunstmuseum Magdeburg (2008). Among his group works we remember: in 2010 Hope! A contemporary art exhibition at Palais des Arts et du Festival of Dinard; From Then to Now: Masterworks of African American Art at the MOCA of Cleveland; Selected Works from the MCA Collection: Focus on UBS 12x12 at the Museum of Contemporary Art of Chicago; in 2009 Beg, Borrow and Steal at the Rubell Family Collection of Miami.
www.massimodecarlo.com