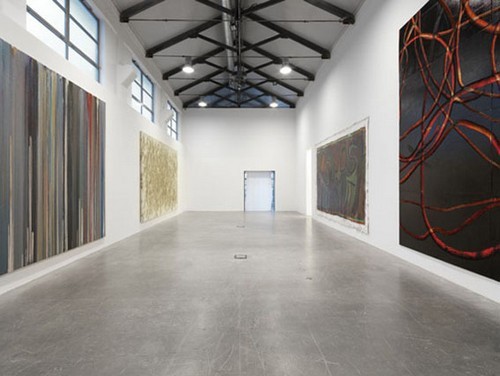 On November 25th Galleria Massimo De Carlo will open Yotta Paintings, a group exhibition that gathers some of the Gallery’s historical artists like John Armleder, Olivier Mosset and Josh Smith, along with the young Dan Colen and Aaron Young. All the exhibited works are paintings, most of them expressely created for the occasion and chosen for their large size (Yotta is the largest unit prefix in the International System of Units).

John Armleder was born in Geneva in 1948, and his works have been exhibited in the most important international contemporary art museums, like the Institute of Contemporary Art of Boston and of Philadelphia, the Kunsthalle of Zurich, the Consortium of Dijon, the Museum of Contemporary Art of Sydney, the MoMA of New York and the Musée d'Art Moderne de la Ville de Paris. His personal exhibitions at MAMCO - Musée d'Art Moderne et Contemporain of Geneva in 2007, at Kunstverein of Hannover and at Tate Liverpool in 2006 are amongst his most recent ones. Exhibited here is Untitled (2010), one of his representative pour paintings, obtained by pouring a variety of paints and varnishes directly on the canvas.

Dan Colen, born in 1979 in Leonia, New Jersey (USA), lives and works in New York. His works have been acquired by the Whitney Museum of Contemporary Art of New York, by Saatchi Gallery of London and by the Astrup Fearnley Museum of Modern Art of Oslo. He was present in several group exhibitions like the 2006 Whitney Biennial, USA Today at the Royal Academy of London, Defamation of Character at the PS1 Contemporary Art Center of New York and Fantastic Politics at the National Museum of Art, Architecture and Design of Oslo. On display is Nobody move. Nobody get hurt (2010), a new grass painting created using real grass.

Olivier Mosset, was born in Switzerland in 1944 and, still very young, he moved to Paris, where he founded the revolutionary group BMPT, together with Daniel Buren, Michel Parmentier and Niele Toroni. In 1977 he moved to New York where he collaborated with artists like Andy Warhol, Steven Parrino and John Armleder. In 1990 his work was exhibited in the Swiss wing at the 44th edition of the Venice Biennale. He lives and works in Tucson (Arizona) where he settled in 1996. The Contemporary Art Museum of Saint Louis (2008) has lately held an exhibition of his work together with his friend John Armleder. In this show, Yellow Rain, a diptych of 1988-1989 where the abstractism of the artist is expressed through hand painted parallel lines.

Josh Smith, born in Tennessee (USA) in 1976, lives and works in New York. Among his most recent personal exhibitions are the ones at the Centre d’Art Contemporain of Geneva (2009) and at MUMOK of Vienna (2008). He took part in the group exhibitions Learn to Read Art: A History of Printed Matter at P.S.1 of New York (2009), The Generational: Younger Than Jesus at the New Museum of New York (2009), Book/Shelf at the Museum of Modern Art of New York (2008) and Meet Me Around the Corner at the Astrup Fearnley Museum of Modern Art of Oslo (2008). Untitled (2010) is part of a group of works named name paintings, in which the letters of the artist’s name, a very common one in America, become the subject of the canvas.

Aaron Young was born in 1972 in San Francisco; he lives and works in New York. His work has been exhibited at the Saatchi Gallery in London (2009), at the KW Institute for Contemporary Art of Berlin (2008), at the Palais de Tokyo of Paris (2007) and at the Serpentine Gallery of London (2006). He took part in the 2nd Moscow Biennale for Contemporary Art (2007) and in the 2006 Whitney Biennial in New York. In the exhibition, Greeting Card, whose making was staged as a performance during the 2007 Armory Show in New York: plywood panels were laid out on the floor, then stained and painted with layers of different colours before a team of bikers rallied on its surface. The burnouts removed the superficial layers of paint, revealing the colours beneath.
www.massimodecarlo.com