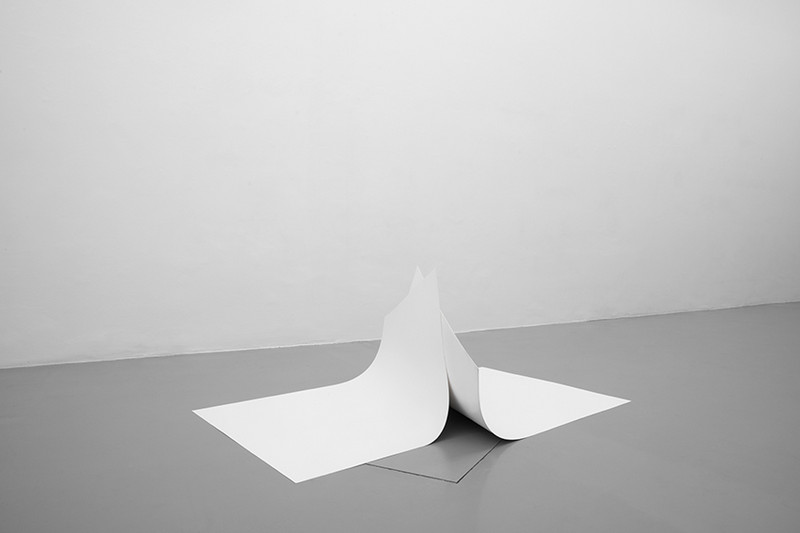 Broken windows, urns that have been destroyed and put back together, burnt rugs, memorials with no names, sheets of paper on the point of crumpling, open flames... No, this isn’t some disaster scene, it’s a partial list of the works on view at Galleria Massimo Minini for the first solo exhibition by Ariel Schlesinger.

hands make mistakes suggests that something sudden and seemingly unintended is about to happen. Schlesinger’s work constantly explores how a negative event can be turned into a positive one, how something out of the ordinary can become a creative possibility. And so even the mistakes of the hands in the title yield new ideas and new works. Catastrophe Is Subjective was the title of his first catalogue, and catastrophe can be the starting point for a different approach, an unusual perspective, a fresh way of thinking about things.

Although the mood seems like one of disaster, fraught with the sense of something that has just happened or is just about to happen, Ariel Schlesinger’s work sends a message of optimism and brilliant creativity, with poetry and a sense of humor that breaks the tension. The burns in the torched carpets are apparently controlled and the gaps in the weave becomes their new pattern; the broken glass of the windows has been photographed, framed, and used as glass for those same photographs; the fragments of urns have been reassembled backwards, as if to contain the whole outside world, not hiding it but revealing it; the memorials are not meant to commemorate anyone and are references to minimal art; the big moving sheets of paper do not crumple against each other, but come together as if in a huge embrace. And some open flames do not start fires, but rather convey the notion of a risk that has been avoided (Jusqu'ici tout va bien / Fino a qui tutto bene, “so far so good”, is the title of another work), reassuring visitors. So far, at least...
www.galleriaminini.it