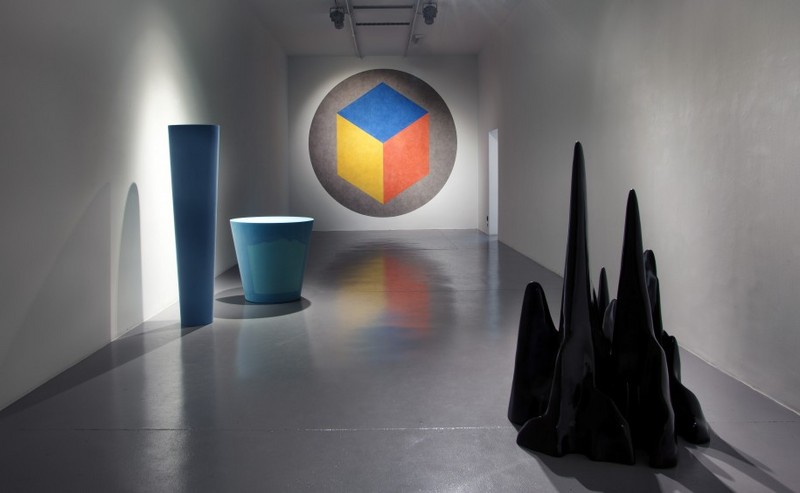 Another installment in the series of double solo shows that may well continue for the entire season, to celebrate our first forty years in business. The gallery opened its doors in 1973, and we've even resurrected our original A4 invitation format of the time - more simple and minimalistic - which we'll be sticking to throughout 2013.

Following on the heels of two great photographers, Francesca Woodman and Letizia Battaglia, and two of the most fascinating painters on the international scene, Carla Accardi and Peter Halley, it is now the turn of two poetic talents who elude all categorization: Ettore Spalletti and Sol LeWitt.

In these exhibitions we are often presenting works closely tied to our own history: shows built around pieces from the gallery, supplemented on occasion with new projects. The idea is that in forty years, we have built up a wealth of experience that allows us to create exhibitions based on our collection, as if we were a small museum. It's a "special" season, no longer delegated only to the talent, taste, and whims of the artist, but allowing us to take first-hand responsibility. A book - or maybe two - will tell the tale, episode by episode, of an adventure that came about almost by chance, but was then pursued and extended for years. An integral, pivotal role in this story has been played by both Ettore Spalletti and Sol LeWitt, artists "of ours" who almost immediately became cherished friends, and with whom we forged an understanding to which this exhibition tries to bear witness.

The works by Ettore Spalletti (b. 1940, Cappelle sul Tavo) will include panels, large vases, and alabaster sculptures; and as we have come to see, pieces with the blue of the sky, the brown of the earth, the green of the fields, the pink of flesh. Spalletti's work is always poised between painting and sculpture, in a successful attempt to wed the two worlds. Italian art itself was born out of the marriage of these opposites, since sculpture was painted in Greece and hence in Rome, but also in Siena, in the work of Jacopo or Valdambrino, with their large frames and lecterns. And for that matter, Art and Architecture have always worked together in founding our culture, building our cities.

Sol LeWitt (1928-2007), an unchallenged master of conceptualism, radically changed the way we see art with a simple vocabulary of lines, geometric shapes and combinations thereof, shifting the balance of creativity from realization to conception. He was an artist deeply indebted to Italy, where he lived and worked for many years: a country he drew on for chromatic inspiration, while capturing the precious simplicity of the combinatory insights it offered. Like a musician working with the serial nature of sound, LeWitt worked with shapes and colors. The show will include sculptures from various periods, wall drawings and gouaches that form a striking painterly counterpoint to the works of Ettore Spalletti.

Two dear friends from the gallery's past who still very present in our programming, and in whom we place the highest expectations for our future.