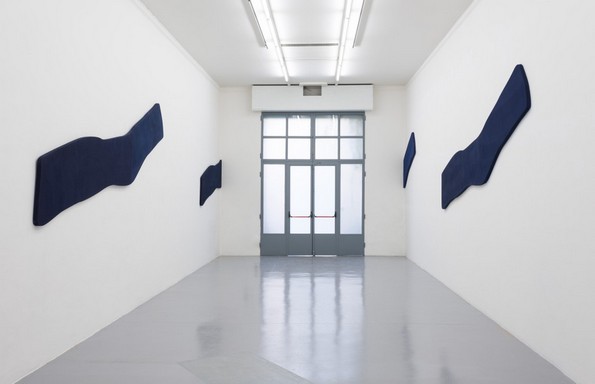 Works of art can’t be explained in words.
Words can only provide some faint trail to follow. Artworks and language lie on different planes that never intersect. To enter into an artwork, we must spend time in its company. Plenty of time, sitting in front of it and looking. Letting it watch us and speak to us.
Not long ago I went back to the Uffizi and to the National Gallery in London, for the umpteenth time, and I think I can say that I’ve only just begun to understand ancient art. It took long enough...
I’d imagine that when he starts painting, Landon has a white canvas in front of him that, as he points out, comes from India. That canvas, as Rauschenberg said, contains all images, hence none. Ghirri thought the same. Sort of like when Armstrong set foot on the moon: for the first time, man saw the Earth from up above. So, that portion of space contains all possible images. An “interval,” like Giulio Paolini’s work Intervallo, where the distance between two sculptures is the true space of the image. The white canvas is occupied by marks, by flat, wide snakes, or big musical notes. Between one field and the next lies a silence, as between the notes of John Cage. The works are rarefied and the words trying to explain them must be as well.

Landon draws fields on the white canvas, then fills them with color, the way Wolfgang Laib fills his sculptures with milk. He moves the color around until he has used up the desired form. His painting occupies space, like Morris Louis’s or Helen Frankenthaler’s; his work alters the place, like Daniel Buren’s or Michael Asher’s. But while those artists had an ideological and political approach, Landon has a poetic and painterly one. The space is indeed altered, but it is decorated and refined. Landon uses the words “cool,” “guys,” and “great” a lot, just like Jack Kerouac. The heart of America.
Massimo Minini

Born in Phoenix, Arizona in 1985, Metz has lived in Brooklyn since 2009. A young artist of international repute, he has exhibited around the world, from Denmark to New York and from Chicago to LA. His medium of expression is painting, his goal to make paintings about painting: an inclusive form of painting, which relies on an extremely meticulous process to accommodate the opportunities of chance. A conceptual approach, for a lyrical, sensual result. His works will be presented for the first time in Italy with a double solo show at the galleries of Francesca Minini, Milan and Massimo Minini, Brescia
www.galleriaminini.it