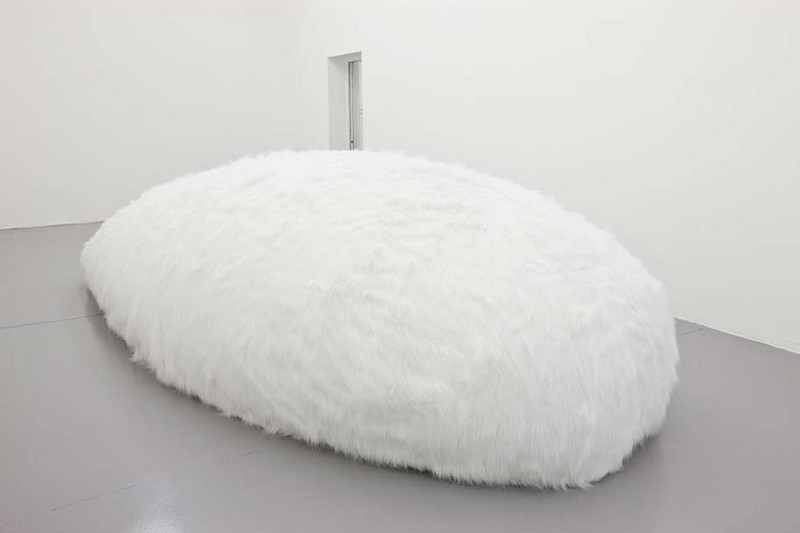 Narration is often at the centre of Nedko Solakov’s works and we find it featuring in the new works created for his second solo exhibition at the gallery. A blend of irony, surrealism and romanticism, Solakov’s little stories entwine with the gilt trickles of ancient frames, vivaciously follow the perimeter of the canvasses, or stand out like lapidary captions on paper, transforming the face of the supports and paraphrasing the contents of the images.

The main feature of the exhibition will be the great sculpture ‘A Beauty 4’, a nice, soft, white furry object that can be observed inside. To do this, the visitor is forced to kneel on the ground and assume a clumsy childish position, but the effort is rewarded – in the artist’s words – “with a nice little treat, a splendid crescent moon shining in the tummy”. Thus Solakov invites his audience to follow him, in a gesture that symbolises his eagerness to take part in unreasonable imagination and conceptual positioning.

Starting from the conceptual assumption whereby the artist’s idea is the very essence of the work, he surpasses this position and uses his ideas to give voice to the rules and contradictions of the social system to which the observer belongs. His works thus explain the dynamics of western thought, artistic yet also political and social, inevitably declining as it approaches a strange and unknown horizon.