a four dimensional being writes poetry on a field with sculptures 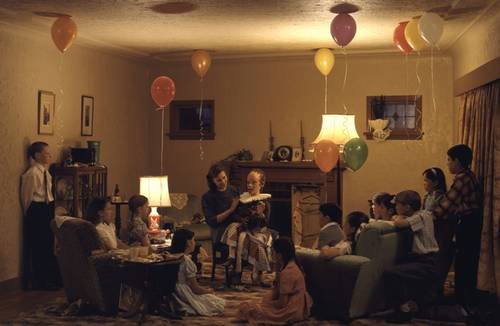 Matthew Marks is pleased to announce a four dimensional being writes poetry on a field with sculptures, an exhibition curated by the artist Charles Ray.

This exhibition will include four works: a Giacometti painted bronze sculpture, Standing Woman, 1948; a large Mark di Suvero sculpture in metal and wood, entitled The A Train, 1966; a large-scale color photograph by Jeff Wall, A ventriloquist at a birthday party in October 1947, 1990; and a suite of seven carved wood sculptures by the American folk artist Edgar Tolson, entitled The Fall of Man. These works are being loaned by the Museum of Modern Art, New York; the Hirshhorn Museum and Sculpture Garden, Washington, D.C.; the Schaulager, Basel; and the Milwaukee Art Museum, respectively.

When asked to organize an exhibition on a theme of his choice, the Los Angeles artist Charles Ray (born 1953) chose that of moral and amoral space, coming from Alberto Giacometti's description of one of his own works. Charles Ray writes, “Space is the sculptor's primary medium, a fact so obvious that it is easy to overlook. Rather than work toward an understanding of how a sculpture both creates and occupies space, we tend to focus on the comprehension of the subject matter and on the material qualities of the work of art.” The artist is interested in the way in which sculpture creates and occupies space socially, and he has chosen these four particular sculptures because each does so in a different way. “This exhibition was curated as an invitation to experience the poetics and artistic perception of both three dimensional and pictorial space.”

Charles Ray is among the most important artists of his generation. Over the past thirty years he has produced a precise and widely admired body of work in a variety of media using both abstract and figurative forms. He had his first one-person museum exhibition in 1989. Since that time, he has shown his work at museums around the world and has been included in two Venice Biennales (1993, 2003), Documenta IX (1992), and four Whitney Biennials. His work was the subject of a 1998 retrospective at the Museum of Contemporary Art, Los Angeles, which traveled to the Whitney Museum of American Art, New York, and the Museum of Contemporary Art, Chicago.

This exhibition is accompanied by an eponymous publication including an essay by Charles Ray.