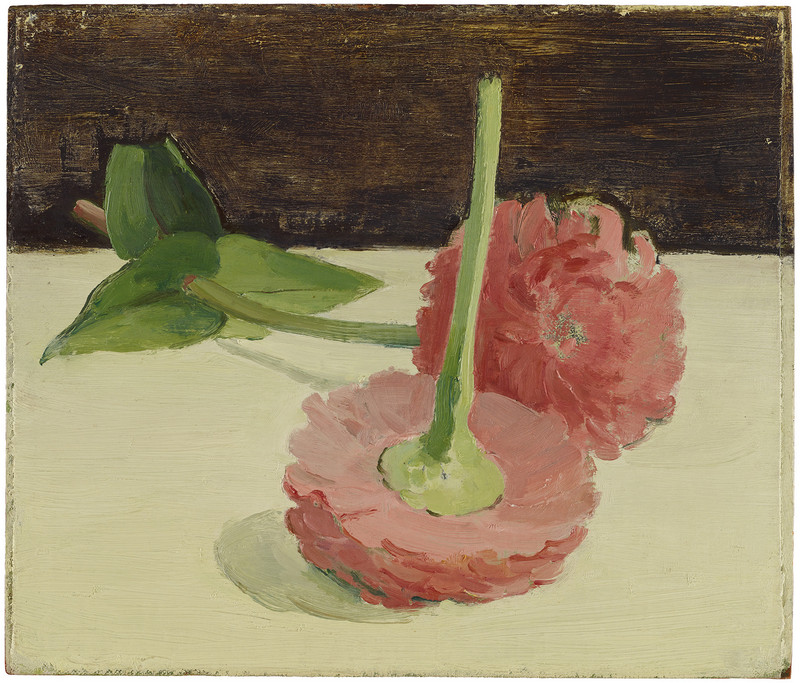 Matthew Marks is pleased to announce, Albert York, the next exhibition in his gallery at 523 West 24th Street. These thirty-seven paintings, on loan from public and private collections, represent the entire range of York’s thirty-year career, making this the most comprehensive exhibition of his work ever organized.

Albert York’s small, visionary paintings of humble subjects — including cows, vases of flowers, and pastoral landscapes of Long Island’s East End, as well as the occasional figurative subject — were often done from memory. Painted on small scraps of wood in the basement of his home during the early morning hours, these works display a distinctive palette and a rare mastery of the medium. York integrated artistic influences as diverse as Piero della Francesca, Albert Pinkham Ryder, Giorgio Morandi, and Édouard Manet while always holding the conviction that painting could distill the essence of things.

In a 1995 New Yorker profile, Calvin Tomkins called York “the most highly admired unknown artist in America,” and two decades later his work remains unfamiliar to many people. This selection of paintings surveys York’s work and for the first time attempts to chart his stylistic development by juxtaposing paintings of similar themes from different periods of his career.

The first hardcover monograph on Albert York’s work — featuring full-page color reproductions of over sixty works, essays by Bruce Hainley, Fairfield Porter, and Calvin Tomkins, and an illustrated chronology — will be published to accompany the exhibition.

York was born in Detroit in 1928. He moved to New York in 1952 and studied briefly at the Art Students League. In the early 1960s he moved to Long Island’s East End, where for much of his life he supported himself as a house painter. He completed only a few paintings a year and eschewed publicity, preferring to work outside the art world’s mainstream. His first one-person exhibition was in 1963 at the Davis Gallery, where he continued to show for the remainder of his life. An exhibition of twenty paintings at the Museum of Fine Arts, Boston in 1983 and another of twenty-four paintings at Mills College Art Gallery in Oakland remain the only one-person museum exhibitions of his work. York completed his last painting in 1992 and died in 2009.

The exhibition is co-curated by Matthew Marks and Joshua Mack and is organized in cooperation with Davis & Langdale Company.