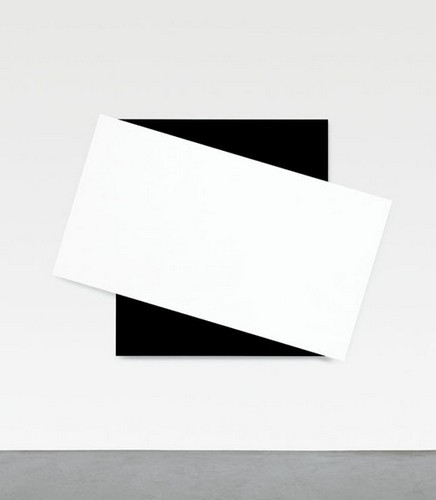 Matthew Marks is pleased to announce, Ellsworth Kelly: Diagonal, the next exhibition in his galleries at 522 West 22nd Street and 523 West 24th Street.
The exhibition features eight two-panel paintings from 2007 and 2008, on view in the 22nd Street gallery. Each consists of a black or white rectangle with a contrasting black, white, or colored rectangle placed diagonally on top and extending beyond the boundary of the canvas below.
In the catalog published to accompany the exhibition, Johanna Burton writes: “What Kelly is producing does not end at the edge...a shadow is thrown, but rather than demarcating the shape and space of the work more clearly, it works to utterly confuse what is being looked at: these are paintings that, in places, don’t end or, perhaps, refuse to show how they begin. Rather than a perceptual fluke or an experiment in phenomenology, however, this is, I think, a part of the painting.”
Four additional paintings will be shown in the 24th Street gallery. A two-panel black and white relief, completed early in 2007, is the oldest work in the exhibition and anticipates the diagonal paintings. The only curved canvas the artist has made in the last few years, which shows Kelly’s more lyrical side, is a dark blue and white painting, and is also on view here. Completing the exhibition are two multi-colored paintings in three and four-panels related to ideas with which Kelly first started working in the 1950s.
Ellsworth Kelly (born 1923) currently lives and works in upstate New York. Since he first exhibited his work publicly more than 60 years ago, he has had over 150 one-person exhibitions in museums and galleries around the world. A room of his new paintings was included in the most recent Venice Biennale, and in 2007 a Focus exhibition at the Museum of Modern Art in New York showed a selection of his work from their permanent collection.
Ellsworth Kelly: Diagonal will be on view at 522 West 22nd Street (11:00 A.M. to 6:00 P.M.) and 523 West 24th Street (10:00 A.M. to 6:00 P.M.) through April 11, 2009.
www.matthewmarks.com