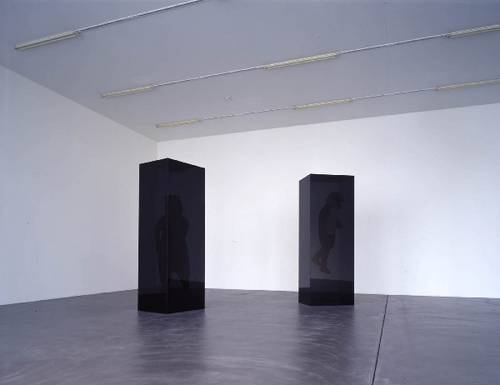 Matthew Marks is pleased to announce an exhibition of work by Peter Fischli and David Weiss at his galleries at 526 West 22nd Street and 523 West 24th Street. This will be the artists’ first major exhibition in the United States since 2002 and will include both sculptures and photographs.

Fischli and Weiss will be exhibiting Rat and Bear (2004), a sculpture that incorporates the original costumes worn by the artists in their early films The Least Resistance (1981) and The Right Way (1983). These works were essentially the starting point from which the art of Fischli and Weiss began to unfold, as many of the recurring themes and elements of the artists’ work are already present. To make Rat and Bear, the artists built sleek life-size boxes out of dark, barely-translucent Plexiglas, suspending the costumes inside. Counted among their earliest and most important sculptures, the costumes seem to have been preserved, their absurdist, hand-made animal forms held in stasis by the high-tech boxes they now inhabit.

Fotografías is a group of 109 black & white photographs made during the artists’ travels in Switzerland and abroad over the past several years. The artists often make large groups of works over an extended period of time. Their exhibitions (and the publications that typically accompany them) serve as a compendium of their artistic practice during a given period and organized around a certain theme, and they expose the nuances and limits of that theme through the numerous variations they explore. The artists have worked in a variety of media, project by project: starting with Plötzlich diese Übersicht (Suddenly This Overview) in 1981, which consists of 150 small clay figures; there are over 100 double-exposure photographs in their flower series; Sichtbare Welt (Visible World) was a seemingly exhaustive archive recording the artists travels around the world, displayed as positive film mounted to lightboxes in a darkened room.

Fischli and Weiss turned to popular imagery to make Fotografías, producing sequences of 4x6-inch images of existing wall paintings they found in amusement parks and fairgrounds. Mythological creatures, spaceships, historical landscapes, skeletons, and animals all appear within these photographs, and some sequences weave seemingly unrelated photographs together into thematic groupings, while others coalesce into fleeting narratives. Made using black & white slide film, these images are drained of the bright colors typical to the fairground painting vernacular, changing the way in which the original paintings were read.

Peter Fischli and David Weiss live and work in Zurich and began collaborating in 1979. The artists represented Switzerland in the Venice Biennale in 1995, and in 1996 a retrospective of their work was organized by the Walker Art Center and subsequently traveled to museums in San Francisco, Boston and Philadelphia. They have had museum exhibitions throughout Europe, including Barcelona, Paris, Basel, and Rotterdam. They will have a retrospective opening at the Tate Modern this October.