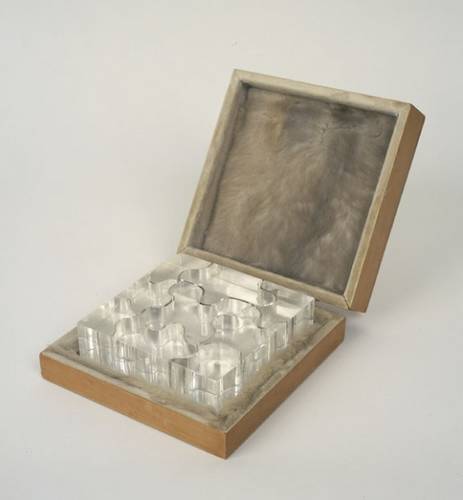 Matthew Marks is pleased to announce an exhibition of Small Sculptures, the next exhibition in his gallery at 523 West 24th Street.

This exhibition includes the work of eight artists: Vija Celmins, Katharina Fritsch,
Robert Gober, Jasper Johns, Ellsworth Kelly, Charles Ray, Dieter Roth, and
Paul Thek. Each piece in the exhibition is a singular work that, despite its scale, remains a powerful and compelling object and represents a significant achievement by the artist. Among the works in the exhibition are both new sculptures seen for the first time and older, rarely exhibited works.

Katharina Fritsch will be exhibiting an enlarged model of a pistol, cast in resin and painted with powdery black pigment. The sculpture is modeled after a Browning pistol owned by the artist’s father and kept in their home during her youth.

Robert Gober’s sculpture is of a battered, well-used can of white paint. Cast in lead crystal and meticulously hand-painted, this work continues a long artistic tradition of work inspired by studio detritus.

Charles Ray’s Handheld Bird, a sculpture of a bird embryo made of painted steel, continues the play with scale, material, and coloration that has been a hallmark of the artist’s work since the beginning of his career.

Vija Celmins’s Puzzle Piece dates from 1966. A solid Plexiglas puzzle enshrined in a fur-lined box—a rare three-dimensional work for Celmins—this sculpture is among the more enigmatic objects within her oeuvre.

Jasper Johns’s Bronze, made in 1960-61, is among his celebrated series of sculptures of light bulbs. It is the only one which represents each constituent part separately: the bulb, socket, and wiring are arranged in a row on an inch-thick plinth.

Ellsworth Kelly’s sculpture is unique in the artist’s oeuvre, the only small-scale freestanding work. Mirrored Concorde, 1970–1971, is a solid piece of highly-polished stainless steel in a trapezoidal shape first developed by the artist in the early 1950s.

Ins Meer, Schimmelberg (Into the Sea, Mold Mountain), by Dieter Roth, dates from 1969. This foot-tall ziggurat of yogurt, chocolate, and other foodstuffs is a classic example of Roth’s work in non-traditional media.

Untitled (Dental Plate #3), 1966, Paul Thek’s sculpture from his series Technological Reliquaries, is a human jaw with a full set of teeth tethered to metallic strings. A response to the prevalence of minimal sculpture, this work is sculpted from wood, brightly painted, and set inside a vitrine like a specimen from a pre-modern age.

Small Sculptures will be on view at the Matthew Marks Gallery, 523 West 24th Street (between Tenth and Eleventh Avenues) through Saturday, October 28, 2006. The gallery is open Tuesday through Saturday, 10:00 A.M. to 6:00 P.M.