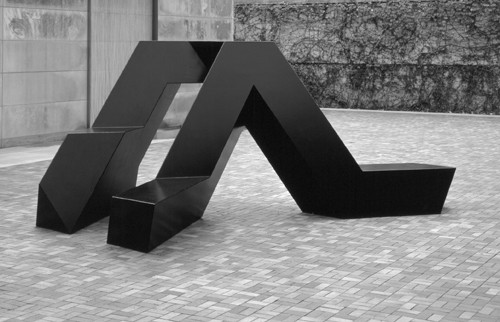 Matthew Marks is pleased to announce Tony Smith: Sculpture, Painting, Drawing, the next exhibition in his gallery at 522 West 22nd Street.
The exhibition presents two large-scale sculptures, Willy (1962) and New Piece (1966), made in Smith’s signature steel, painted black. Accompanying these works is a set of twenty charcoal drawings from 1954 and a single 14-foot long black and white painting, both of which represent the artist’s largest works in their respective mediums. Together, the works in this exhibition illustrate the diverse nature of Smith’s oeuvre. Smith (1912-1980) is widely recognized as one of the most important and influential sculptors of his time.
Smith, who trained as an architect, often used complex mathematical building blocks to create the shapes for his sculptures. Willy (1962) combines shapes that are tetrahedral (four-sided solids whose sides are equilateral triangles) and octahedral (eight-sided solids). The title, suggested by Smith’s friend, the painter Paul Feeley, whose work is on view concurrently in our 24th Street gallery, comes from a character in Samuel Beckett’s 1961 play Happy Days. Beckett’s Willy crawls around the stage making only occasional noises. The title gives the work a figurative reference, rendering the horizontal element a leg.
New Piece (1966) at first appears to be a cube drawn in perspective. Smith constructed the shape from twelve-sided modular units, called rhomboidal dodecahedrons. Muscular and monolithic, yet minimal and straightforward, the sculpture gives the viewer, as one early critic wrote, “a disquieting sensation...as if movement around the piece releases its potential energy.”
Smith considered the issues of architecture, sculpture, painting, and drawing identical. The set of twenty drawings, made in 1954, are unique within his oeuvre and are exhibited here for the first time. Made several years before his first mature sculptures, the drawings from the fifties, as Rob Storr has written, “clearly played an important role in Smith’s transition from architect to sculptor.”
A major retrospective of Tony Smith’s work was organized by The Museum of Modern Art, New York in 1998. This was followed by a European retrospective, organized by IVAM in Valencia, Spain in 2002. Earlier this year, Smoke (1967), one of Smith’s largest sculptures, was installed to great acclaim in the atrium of the newly renovated Los Angeles County Museum of Art. Tony Smith’s work is included in most leading international public collections including The National Gallery of Art, Washington; The Museum of Modern Art, New York; The Tate Gallery, London; and the Centre Pompidou, Paris.
Tony Smith: Sculpture, Painting, Drawing will be on view at the Matthew Marks Gallery, 522 West 22nd Street (between 10th & 11th Avenues) through Saturday, October 25th, 2008. The gallery is open Tuesday through Saturday, 11:00 am to 6:00 pm.
www.matthewmarks.com