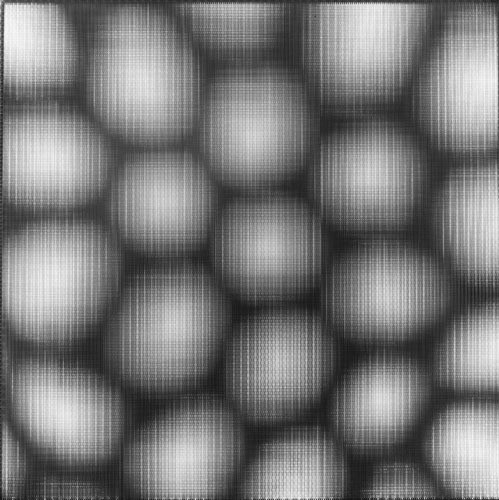 Max Estrella is proud to represent Aitor Ortiz ever since his first solo show at the gallery in 2000. From that moment onwards Ortiz’s practice has grown apace, with a career dotted with many awards and an ongoing presence in international art circuits.

Transcending documentary photography of architecture and foregrounding photographic representation’s propensity to dissolve and transmute the real, Aitor Ortiz works with space, architecture and the object as a starting point to deal with a series of visual and cognitive issues.

In previous suites of work such as MODULAR, ESPACIO LATENTE or AMORFOSIS, the artist had already addressed similar concerns, in which the shift in experience between the two-dimensional and the three-dimensional produced a variation in sensorial perception and probed the boundaries of photography.

Ortiz has an unrelenting drive to tackle head-on the dilemma between representation and interpretation (perception). In doing so, he forges connections between the content of his images, the physical qualities of the supports he chooses for his works, and the position they occupy in the exhibition space. In consonance, Aitor Ortiz stakes out a broad scope for his work and the relations between the places he photographs, and the conscious and unconscious devices operating in the process of manipulating the image: the eye (interpretation, frame, decontextualisation,...), the photographic camera (focus/out-of-focus, optical distortion, transmission of movement...) and the brain (the limitations of an imperfect device in reading information and its empirical powers: association of concepts...). These relations come together in the exhibition space, where the physical experience once again transcends the actual content of the photographs and becomes part of a process of continuous interaction between representation and the perception of the beholder.

In the words of the intellectual Agustí Chalaux (1911-2006) “Observation of the outer world can only capture ‘phenomena’, that is to say ‘perceptible appearances’. Phenomena are things displaying themselves to the senses, and of all the senses sight is particularly germane. This appreciation is confirmed by the fact that many terms with Greek and Latin roots (evidence, intuition, idea, opinion...) bearing a connection with either the capturing or the rendering of phenomena are made up of words (videre, optikos) clearly connected with the sight, the sense capturing light, to apprehend that which is intelligible.” “That said, we must underscore that any observation about the outer world shall be severely limited if it does not take into account the manifold symbioses and internal interpretations that the evolution of total human intelligence has been, and continues, inventing. If we look, for example, at a walking stick plunged into water, the phenomenon we will appreciate is that the walking stick is bent. The accumulation of internal symbioses may lead us to discover the existence of an optical phenomenon that causes the walking stick to be apparently bent. ‘Appearances are often deceptive.’ In this domain, it is up to man to discover the exact reality of the phenomenon beyond appearances regarded as real, which only deform our vision of the world.”

Noumenos (Noumena), the title of this show, is a fraught term used in Philosophy, from Plato to Kant, to designate non-phenomenal objects which emerge from deepest intimacy “in a pure state.” Whereas Phenomenology starts from cognition to produce impressions, introspection captures intuitions which may, or may not, become cognition.

Going back to Chalaux "‘noumena’ are impossible to conceptualise, to analyse or to reduce to any attempt at generalisation, measurement or/and indefinitely repeated experimentation to confirm or/and refute any theory. In other words, ‘noumena’ are not subject to scientific logic, while the totality of phenomena is susceptible to being treated in a logical and experimental manner."

“Apart from their inability to take on expressive forms as a result of their rational ineffability, noumena are as singular and unrepeatable as the very person generating them. Therefore, two of the basic conditions of ‘science’ are missing: that what is studied is definable in its specific-empirical form, and that it can be repeated indefinitely using experimental statistics.”

Aitor Ortiz (Bilbao 1971), is one of the most widely recognised Spanish photographers. He has had numerous solo and group exhibitions in major museums in Europe, America and Asia. His international prestige was endorsed in 2011 with the publication of a monograph by Hatje Cantz. His latest one-person shows include: Museo Guggenheim, Bilbao (2011); Fotografiska (Swedish Museum of Photography, Stockholm, 2012); and Sala Canal de Isabel II, Madrid (2012). His work has won, among others, the following awards: Ciudad de Palma Award; ABC Photography Prize; Honorary Prize at the Alexandria Biennale (Egypt); First Villa de Madrid Photography Prize. His works are in collections including MNCARS, Fundación La Caixa, ARTIUM, CAB, IVAM, AXXA, Museo Guggenheim Bilbao, MACUF, Foto Colectania, Fundación Telefónica, Museo Es Baluard, and many others.
www.maxestrella.com