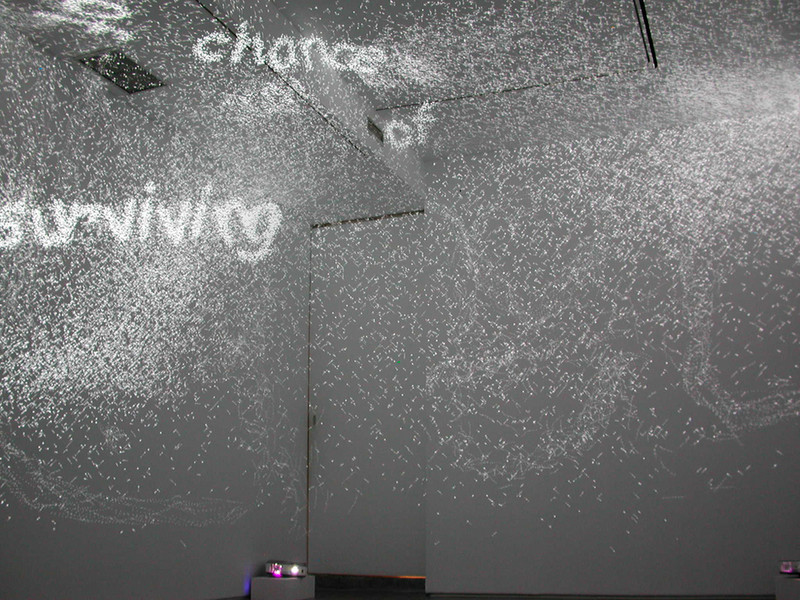 Max Estrella Gallery presents Charles Sandison ́s exhibition Nature morte, his first solo show in Madrid after 6 years. The exhibition includes a number of new works, where the artist reflects on language as a product of evolution.

Sandison writes specifically created computer programs (controlled by algorithms used in the simulations of molecular dynamics) which generate words and bring them to life. He uses words in different languages, signs or numbers (apparently contradictory data: between word and form, poetry and code, the organic and the digital), as the constituent elements to create an installation project, with video projections arrayed around the proposed architectural space, for which they are specially conceived. As the basic form most often used, words are simple but they convey a strong emotional intensity which grips the spectator, including them in the very action of the work.

Sandison ́s use of words as the basic material in his work (being one of the few which currently maintains the goal to be seen in projects by Jenny Holzer) places him in a tradition in art history continuing on along the path laid by conceptual art. However he advances in the gap towards the expanded field of representation, on the border of image and word, appearing in a sculptural format. It is also an ultimately reduced version of virtual reality.

The central piece of the show, The birth of language, uses the entire text of On the Origin of the Species (published 1859) by Charles Darwin. A computer software ‘artificial life’ program brings all of the ‘full-stops’ in the text to life. Its capacity to be a work in movement allows it to show the internal rhythm of the structure of a biological organism, achieving a self-generating work, an open narrative, a system of concepts capable of being forever reprogrammed, changed, altered and varied.

At the end, his work reminds us that, even when culture created words and languages, words are still not anything in themselves; they only refer and connect, making the world exist for us. Language is our interface with reality.

Originally from Scotland, Charles Sandison (Haltwhistle, UK 1969) studied at the Glasgow School of Art, graduating in 1993. After moving to Finland 17 years ago Sandison has worked extensively with real-time computer generated video projections that combine language, form, architecture, and movement, for which he is widely recognised as one of the most influential video-artists of the moment.

He has recently received the prestigious Ars Fennica Price awarded by the Kiasma Museum of Contemporary Art, in Finland, country where he currently resides.

He has also participated in international Biennials, as the Singapore Biennial. Worth mentioning is his participation at the Venice Biennale in 2001 with his acclaimed work Living rooms.

He is also a visiting professor at Le Fresnoy, Lille and has lectured at the Sorbonne, Paris.

The artist would like to dedicate this exhibition to David Morrison (1941-2012 Wick, Caithness) poet, librarian, nationalist, romantic, drinker, friend of tinkers, drunks and passing strangers, painter of abstract landscapes, survivor of a dead rebellion.