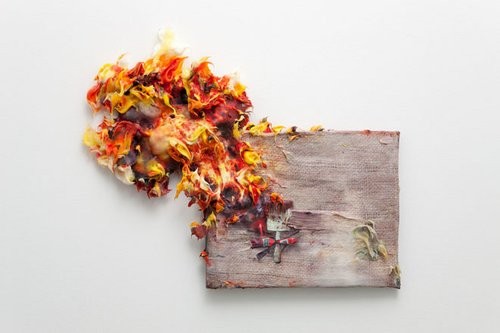 Galería Max Estrella is delighted to announce the exhibition España/América La Abstracción redefinida, curated by the art theorist and critic, Demetrio Paparoni. The exhibition, which will open to the public on January 21st, examines the existing connections between works of carefully selected American and Spanish artists. The American artists featured in the exhibit are Peter Halley, Jonathan Lasker, Fabian Marcaccio and Jessica Stockholder. All of these artists are based in New York and have a clear European connection. The Spanish artists in the exhibit are Angela de la Cruz, Luis Gordillo, Juan Uslé and Daniel Verbis.
In the early 1980's postmodernism's assertion in the art world caused abstract painting to redefine its relation to the real. Abstraction from the post war era until the 1970's, influenced by Clement Greenberg's theorized formalism, was proposed as a system of self referential signals of opposition to figuration, thus free from any form of narrative. From the 1980's abstraction has redefined its own linguistic statute, including and/or encrypting the landscape horizon line, sociological themes and narrative metaphors of daily life. Using the denial of Greenberg's theories as their basis, postmodern artists included narrative elements in their work in order to redefine their formal and conceptual statutes, making obsolete the rhetoric of formal opposition between abstraction and figuration, and between US and Europe.

When considering the works of the artists on view in this exhibition, it is possible to recognize the thickness of the frames of minimal works, the lack of thickness of canvases in Support-Surface and the superimposition of images, which the telematic revolution has made us accustomed through the legacy of Pop Art and its use of electric colors. All of these vertiginous superimpositions have the characteristic of a framework that sets a constructive process within the artwork, which allows the experience of new possibilities through repetitive gestures, as well as generating different images. It can be noticed in some of the paintings and sculptures in the exhibition that through the constructive process the artwork has absorbed, redefined and made it's own the culture and strategy of design. But above all, the works of these artists differ from the abstract artists of the 50's, 60's and 70's because they can be presented as abstract, yet can also be considered as figurative.

Demetrio Paparoni has curated several exhibitions dedicated to postmodern abstraction. L'astrazione ridefinita is also the title of one of his books, published by Editorial Tema Celeste in 1994 (with a foreword by Arthur C. Danto). He has curated a great number of monographs and catalogs, among which are those dedicated to Jonathan Lasker, Peter Halley, Chuck Close, Mimmo Paladino, Peter Halley, Tony Ousler, David Salle, Alex Katz, Vic Muniz, Jenny Saville, Bernardi Roig.
www.maxestrella.com