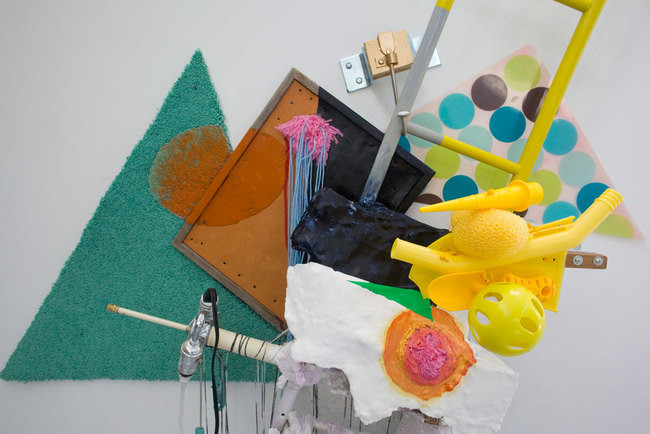 Stockholder’s work has played a crucial role in expanding the dialogue between sculpture and painting. Robert Rauschenberg, Kurt Schwitters, and Frank Stella are important points of reference, though the artist has expressed that she was more attracted to the work of Jackson Pollock and Donald Judd at the outset as “They were both minimal and grid like”. Stockholder adds to this dialogue by tending to the particularities of context and proposing that the experience of space be merged with that of viewing pictures.

For more than 25 years Ms. Stockholder has been celebrated for site-specific sculptures / installations that challenge boundaries between painting and sculpture. (like Flooded Chambers Maid in Manhattan ́s Madison Square Park, in 2009 or Landscape Linoleum, in Openluchtmuseum voor beeldhouwkunst Middelheim, Antwerp, Belgium, in 1998). Throughout her career, Stockholder has balanced production of these monumentally scaled works with self-contained assemblages that reflect a more intimate, human scale.

These assemblages of found and store-bought objects are formal “essays” which inscribe themselves somewhere between home and Home Depot. The works include recycled material, building materials, and artist’s materials all of which work together with light and colour as they become a whole new thing quite separate from the materials from which they are made. Raised on the west coast of Canada in Vancouver, Stockholder’s works often include a strong reference to landscape. Jessica Stockholder (Seattle 1959) is one of the most influential artists of her generation. In 2007 she received the prestigious Lucelia Artist Award of the Smithsonian American Art Museum. Her proposal in ArtBasel 2005 earned her international critical acclaim. She is Chair of the Department of Visual Arts of the University of Chicago, Illinois.

Stockholder has exhibited widely in museums and galleries internationally. She was the focus of the career survey exhibition Jessica Stockholder, Kissing the Wall: Works, 1988-2003 at the Blaffer Art Gallery, University of Houston, Texas and the Weatherspoon Art Gallery, University of North Carolina, Greensboro. She has had solo shows at museums including the Dia Center for the Arts and P.S. 1 (New York), The Renaissance Society (Chicago), the Power Plant (Toronto), and K20 Kunstsammlung, Nordrhein-Westfalen (Düsseldorf). She has been included in important group exhibitions including SITE Santa Fe and The Whitney Biennial. Her work is represented in collections of numerous museums including the Whitney Museum of American Art, the Art Institute of Chicago, the Los Angeles County Museum of Art, Kunstmuseum St. Gallen, the Stedelijk Museum in Amsterdam, the British Museum in London and Fundación La Caixa in Barcelona, among others.
www.maxestrella.com