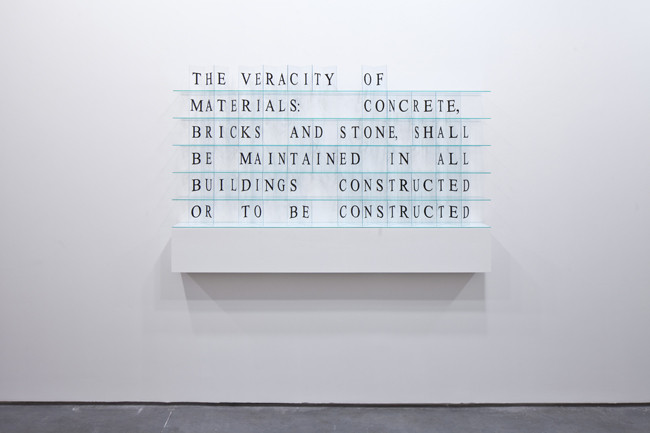 Max Estrella Gallery is pleased to present the exhibition Brutalism of the artist Marlon de Azambuja, after his successful show in this space two years ago.

Marlon de Azambuja interests have focused on the cultural and aesthetic impact of architecture and urban planning characteristic of the big cities in the world. Deeply influenced by Brazilian modernist architecture in contrast to the precariousness visible at the foot of large constructions, Marlon de Azambuja has transformed, through his interventions, urban elements in artistic matters and, spontaneously, in works of art. Likewise his critical gaze towards the growing empowerment of the art world, reflected in the construction of large buildings for museums, designed by renowned architects, has opened new concepts in the work of this artist.

Brutalism presents a new proposal of Azambuja, who in a combination of forces, gives a decisive role to the construction materials of the architectural space. The great architects of the world have erected not only large masses of concrete, bricks and other materials; have also projected a large cluster of ideologies - in many utopian cases - which have fixed in the collective consciousness models of thinking and inhabiting the world. The possibility to test this system, is the leitmotif of this exhibition. Based on the strength of convictions of the spectator, Marlon intends to turn them unstable, almost destroying them, to raise them up again later on. Specifically Brutalism, as suggested by its title, is the process of accepting the nature of materials and urban conditions of human coexistence.

This year will be specially important in his career, highlighting his residency at the Bronx Museum in New York in Spring, to be followed by Inheritance, a solo exhibition at the PIVÔ Art Center of São Paulo, Brazil, on the occasion of which a monograph of the artist will be published.
www.maxestrella.com