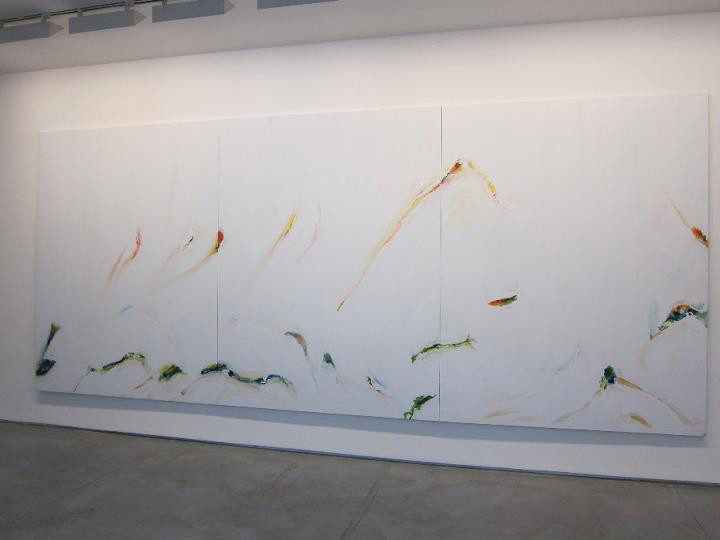 Discovered in 1841 by Sir James Clark Ross, Ross Island was the base for the first South Pole expeditions and it is still a neuralgic centre for Antarctic investigations. Ross Island was the target of Sir Ernest Shackleton crossing in 1914, The Imperial Trans-Antarctic Expedition, which will make him (he taught) become the first person to cross the Antarctic continent on foot, a challenge that became impossible when the iced Weddell seas prevented the navigation of Endurance, his boat, which ended up trapped in the ice. Those icebergs surrounding the white continent closed down and neutralized the progress of the expedition, but led Shackleton and his crew to a even greater feat, taking them to the glorious pages of the history of navigation, and above all, of Adventure (in capitals), after surviving in really extreme conditions for 20 months without a single casualty.

This new Nico Munuera ́s exhibition, My Ross Island, is born of the need to search for new ways of working, but keeping the abstract view of landscape paintings and, above all, the painting itself and its enjoyment, its own adventure.
As for Shackleton, Ross Island is also for Munuera the idyllic island of creation, a power that prevails, the target by the end of the world which is not always preferable to reach, as what happens unforeseen by the way, most of the time, is much richer that the ultimate goal established in the plans. Ross Island is just the excuse of a target set, but unpredictable, which allows you to take up the adventure of painting again. As then the South Pole, only a century ago, the paint is perhaps the last bit of adventure left in the world of art.

The exhibition is based both on photographic and cinematographic documentation by Frank Hurley aboard the Endurance and remains the idea of a snowy and icy landscape. If in his previous series No Flags choosing a reference when painting was a major change in his work, in My Ross Island Munuera paint opens further to other ways of dealing with the image on the canvas, combining both the underlying in his most abstract woks (in the horizontal sweeps series) with the direct reference to the photographs taken by Hurley.
Basic is also the use of colour in this series because, although it is predominantly white, colour appears from below, as the ice cracking and pushing the snow to escape the oppression of its heavy mass. The surface colour is enhanced by a greater colour range, more violent, more alive than in previous works, brighter and cleaner, transparent sometimes. On the other hand, what remains are some of the pillars on which Munuera ́s work has been supported to date: this particular way of flowing paint on the canvas that draws with a dynamic touch. The white crosses the canvas making us a glimpse of an illusion with references to the Oriental landscape, with a little violent rhythm, unnerving sometimes because of its unrecognizable structure.

Seeing these pictures, you may feel the loss, disorientation and adventure, to feel what meant to paint each work. You may feel the polar drifting of the expedition the artist feels when he faces the canvas. Munuera perhaps felt like Shackleton immersed in a battle with nature, in its fields of ice. As the crew of the Endurance, we need temperance and patience to keep calm in the search or in the finding of wisdom (the wonder in the contemplation) beyond the target, always, although we never reach our Ross Island.

He has been recently granted (2011) with an artistic creation scholarship in Berlin by Caja de Ahorros del Mediterráneo (CAM), and previously (2007) he was awarded with an Artistic Creation Grant in New York, by Casa Pintada Foundation. He was Generation '05 Cajamadrid First Prize Winner, after his stay at the College of Spain in Paris (2003).