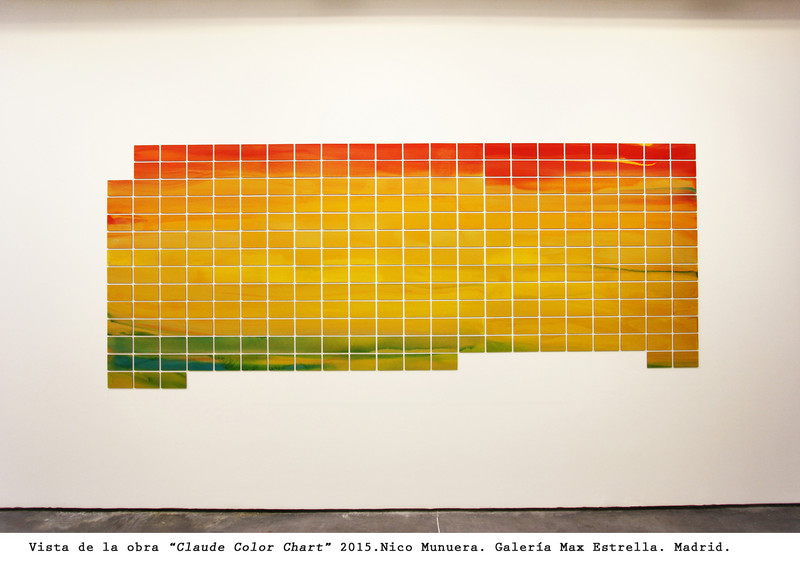 In his third individual exhibition at Max Extrella Gallery, Nico Munuera invites us again to enter in his particular painting field. The color as origin and always as a connecting thread in his work, presents itself with a special vitality and delicacy of atmospheric nature in this project.

La isla de Boneless translates us to the recurrent, physical and interior enclave inhabited by Munuera. Physical and geographic space of natural surface, standed out by the coast where the boundaries join together, separate, blur and mix up always as an ever-changing drawing. Interior as a reference to the lonely experience of an inhabitant and scour of each fragment of this landscape that is the painting. Chasing the time in the deliberate contemplation of his light but perceptible changes. Meticulous observation and nature’s experience. Nature understood in the deepest meaning, that it is represented in the work not because of the proper representation or interpretation, but in the behavior of the flowing painting itself.

The ink, used as in the mokkotsu Japanese technique (also known as boneless, which consists of strokes without any outline), allows the exploration of the customary characteristics of the painting, as physical media of expression, inviting us to discover the color as the nature itself. It is conducted, transformed and modeled in the same way the elements are placed in nature. The painting flows in the same manner as a plant grows. Under its apparently static form it contains inside the intuition of the past and the future.

That time and its meticulous observation can also be seen in works as Claude Color Chart. The idea of filmic, photographic, cartographic or just fragmented montage, linked in our culture to concepts like accuracy and assimilated as rational truths is combined in its final resolution by the intuition of the shades and relations. Perceptions that derive from that circular experience of observation that drives us from the painting to the landscape.

Time, the glance and the color are, possibly, the three great internal concepts found in the experience of Munuera’s works. In the words of David Barro: “It is careless whether they are flags or medals, snow-covered or marine landscapes, it is simply about thinking the painting to let it breathe, setting the color free to work, so the image could claim itself”. A non-existent image emerges and should always develop as an event.

He has been recently granted with an artistic creation scholarship in Berlin by Caja de Ahorros del Mediterráneo (CAM), and previously (2007) he was awarded with an Artistic Creation Grant in New York, by Casa Pintada Foundation. He was Generation '05 Cajamadrid First Prize Winner, after his stay at the College of Spain in Paris (2003).