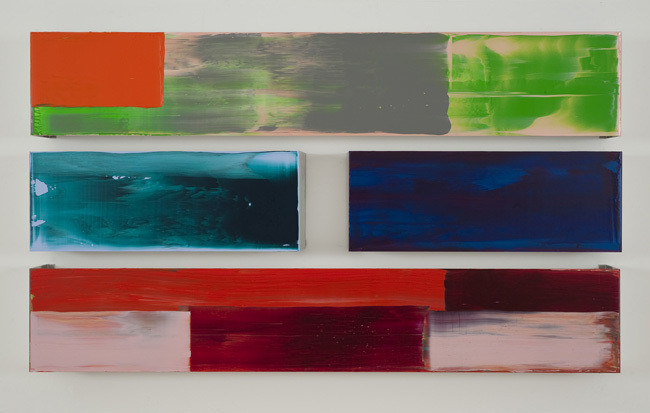 The work of Pedro Calapez is a particularly pertinent demonstration of the way in which contemporary painting ́s vocation is in the act of being, and shows what it was once the painter ́s gaze. In Calapez ́s work we see a gaze in motion, albeit suspended in time and space, that encounters the gaze of the other – gazes in transit, gazes in collision.

The new works presented at Max Estrella Gallery reveal a set of concerns that are a constant feature in the artist ́s work – spatial relationships and the landscape – but it is his concern with the ways of seeing that forms the main thread that runs through his work. His exercises in seeking and discovery reveal the existence of a pedagogy of seeing which, neither didactic nor playful, encourages an awareness of the possibilities of the gaze. The layout of the exhibition compels to movement which is declined constantly in contemplation and performance.

Since the start of his work as an artist, which has always been marked by the plasticity of color, Pedro Calapez has proposed visual equations in which the spatial relationships and different dimensions and possibilities of the field of vision have been constants. It is no mere coincidence that the landscape, which is always nature as it is seen, occupies a prominent place in the artist ́s pictorial compositions. The work of Calapez serves almost as a mirror. As we gaze into it we recognize in the surface facing us the very same action that we are making at that moment: looking, a look that extends far beyond the biological function of seeing. We feel tempted to look for those earlier eyes that saw what we are now being shown. In seeing the amazement of our discovery reflected upon these surfaces, the notions of what is abstract and concrete become confused, so that we can discern a presence within the absence in the piece. This is another of the virtues of his work: it allows us to recognize abstract expressions in a concrete structure which unravel into a certain corporeity of abstraction.

Recently his solo exhibition There is only drawing has been on show at Luis Seoane Foundation in La Coruña.
www.maxestrella.com