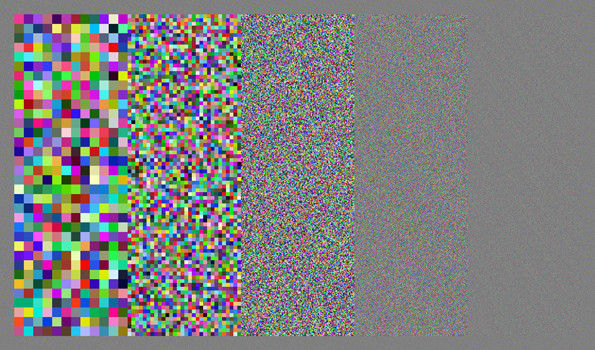 Rafael Lozano-Hemmer is an electronic artist who develops interactive installations that are at the intersection of architecture and performance art. His main interest is in creating platforms for public participation, by perverting technologies such as robotics, computerized surveillance or telematic networks.

The exhibition, the second of the artist in the Gallery, consists of three installations that have in common the materialization of randomness. Meaning that, all his works are somehow modified by the spectator, reacting on his presence and movements. Lozano-Hemmer uses strategies of creation and criticism such as ambiguity, irony, repetition, and performance, with the aim of creating experiences of connection and complicity.

An example of this is the main piece of the exhibition: Tape Recorders. Rows of motorised measuring tapes record the amount of time that visitors stay in the installation. As a computerised tracking system detects the presence of a person, the closest measuring tape starts to project upwards. When the tape reaches around 3 meters high it crashes and recoils back. As a metaphor for a growing city, arriving a moment in which it collapses. Each hour, the system prints the total number of minutes spent by sum of all visitors.

In the exhibition the artist will be presenting the work Method Random. It is a series of chromogenic prints that have been generated by computational methods that attempt to create randomness. Random number generators (RNG) are essential algorithms for a large number of applications from encryption and security to simulation, jury selection, double-blind trials, statistical sampling, game theory and many others. While the sum of all colours picked by different RNG algorithms generates a neutral gray, patterns can be discerned when massive number of pixels can be seen simultaneously. These prints show how human perception of organization can often spot the fundamental difficulty for computers to appear unpredictable.

Finally, First Surface. Two front surface mirrors are suspended from a thread and move with the air flow and with a small motor. Projected on the wall behind the mirrors is a real-time virtual representation of the public as seen from the perspective of the mirrors. The public is represented as patterned 3D silhouettes anchored in a reference prism that rotates with mirrors. The piece is an ”apocatoptron” (derived from the Greek Apo- for “away from” and Katoptron, for “mirror”) an attempt to construct an artificial perspective on the reflected subject.

Simultaneously to the exhibition in the Gallery, Fundación Telefónica in Madrid will present a show at its headquarters in Gran Vía form the 14th of May, coming from the Borusan Contemporary Museum in Istanbul.

Rafael Lozano- Hemmer (Mexico City, 1967) received in 1989 a B.Sc. in Physical Chemistry from Concordia University in Montreal, Canada. He is a faculty associate of the Graduate School of Design at Harvard University.

His large-scale interactive installations have been commissioned for events such as the Millennium Celebrations in Mexico City (1999), the Cultural Capital of Europe in Rotterdam (2001), the UN World Summit of Cities in Lyon (2003), the opening of the YCAM Center in Japan (2003), the Expansion of the European Union in Dublin (2004), the memorial for the Tlatelolco Student Massacre in Mexico City (2008), the 50th Anniversary of the Guggenheim Museum in New York (2009) and the Winter Olympics in Vancouver (2010)

Recently the subject of solo exhibitions at the San Francisco Museum of Modern Art, Fundación Telefónica in Buenos Aires and the Museum of Contemporary Art in Sydney, he was the first artist to officially represent Mexico at the Venice Biennale with a solo exhibition at Palazzo Soranzo Van Axel in 2007. He has also shown at Biennials in Havana, Istanbul, Liverpool, Montreal, Moscow, New Orleans, Seoul, Seville, Shanghai, Singapore and Sydney. Collections holding his work include the MoMa in New York, Tate in London, AGO in Toronto, CIFO in Miami, Jumex in Mexico City, DAROS in Zurich, Borusan Contemporary in Istanbul, MUAC in Mexico City, 21st Century Museum of Art in Kanazawa, MAG in Manchester, MUSAC in Leon, MONA in Hobart, ZKM in Karlsruhe, MAC in Montreal and SAM in Singapore, among others.

He has received two BAFTA British Academy Awards for Interactive Art in London, a Golden Nica at the Prix Ars Electronica in Austria, “Artist of the year” Rave Award from Wired Magazine, a Rockefeller fellowship, the Trophée des Lumières in Lyon and an International Bauhaus Award in Dessau.