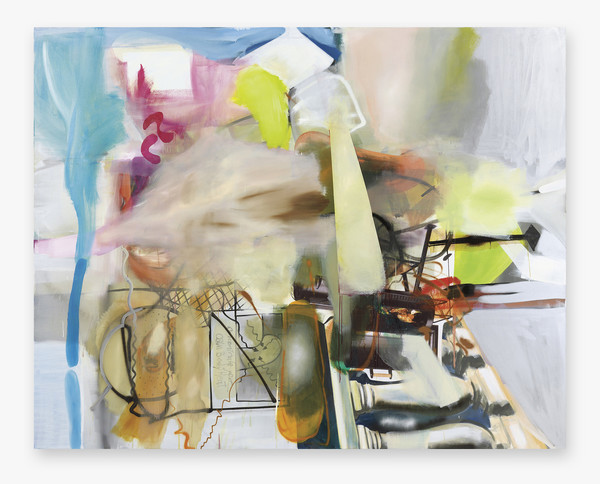 On the occasion of Gallery Weekend Berlin, Galerie Max Hetzler will be presenting an exhibition of Albert Oehlen Paintings 2004 – 2005.

Oehlen’s sensibility and calculated practice is very focused on collage. The fragmentation and combination that are aspects of collage figuratively configure his abstract paintings. And now as he literally attached a collage element at the beginning of a painting, the collaged paper and the painted elements became one – they became unified in the canvas plane. (Klaus Kertess)

The starting point of the eleven large-scale paintings featured in the exhibition are collages of images from magazines glued directly on the canvas. Subsequently Oehlen uses multiple layers of paint characterised by a very distinguished colourful brushwork and implementing various art-historical references as Surrealism, Abstract Expressionism or Pop Art. The collages give a certain direction and are echoed by titles such as Mode (Fashion), Alm (Mountain pasture), Sog (Suction), Blumen (Flowers), Münzen (Coins), Auf der Veranda (on the Veranda) or Rasieren (Shaving). Once they get deprived of their context and original meaning, the cut-outs act as an aesthetic element of Albert Oehlen’s painterly montages. The motifs gradually abandon their figurative resistance and become submerged on the way towards abstraction. At the same time none of Oehlen's canvases can be described as either abstract or figurative. This body of work marks the introduction of collages on canvases, which in this first series are still densely covered with brush strokes. Later on, in the 2008 series completed in Spain, which has been exhibited at Galerie Max Hetzler before, motifs concentrate in the central part of the surface while the edges remain untouched.

Ultimately, it is painting itself that has always been the core topic of Albert Oehlen’s work. Pictures are the basis for more pictures, one development follows the other as he constantly questions the potential or limitations of painting as well as crosses the boundaries of the medium until new possibilities emerge. He has been constantly redefining the limits of figurative and abstract art, colliding various styles, orders or mediums and in consequence expanding the notion of painting. One is reminded of Oehlen’s early days when he was trying to democratize painting and to approach it with a certain scorn. In an interview the artist claimed that he’d always wanted to do Pop Art, big, colorful things with immediate appeal.

Equally featured in the exhibition are eight works from 2010 presenting a different approach to collage, which were created by Oehlen in cooperation with the composer Holger Hiller. The latter was one of the key figures of the '80s New German Wave (Neue Deutsche Welle) and co-founder of the band 'Palais Schaumburg'. Oehlen's unique circular collages engage in dialogue with Hiller's vinyl records visually, Hiller being strongly inspired by the idea of montage.