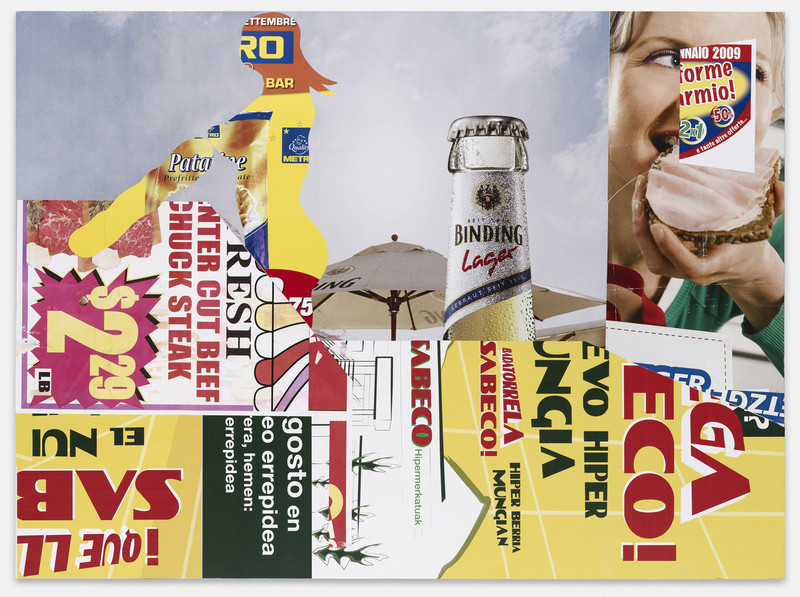 Galerie Max Hetzler is pleased to open a new gallery space in Bleibtreustraße 45, Berlin- Charlottenburg with an exhibition of recent works by Albert Oehlen on September 7th, 6-8 pm.

In the exhibition Interieurs we will present new large-scale works on canvas by Albert Oehlen made of cut-outs from advertising posters, mostly for German and Spanish supermarkets, as to be found on billboards.

When in 2008 Albert Oehlen was asked why he had recourse to fragments of advertising posters in his new paintings, he answered: "I wanted emotions! At some points, I had to admit to myself that my approach to art was a bit sober. [...] At the same time, I'd always wanted to do Pop Art, big, colourful things with immediate appeal.” (Interview by Max Dax, in: Albert Oehlen 1991-2008, Galerie Max Hetzler and Holzwarth Publications, Berlin, 2008).

The 'trashiness' of the advertisements is now all over the picture. "It seems that these days there are more advertisements that are anything but 'sophisticated', that just scream at you, adverts that foreground a ghastly red and yellow contrast, where white block capitals are given a black drop shadow. Blatant piles of consumer articles of one sort or another," says Albert Oehlen (idem). This material is precisely the starting point of Oehlen's new works.

The compositions are all evocations of interiors, playing with shapes and textures of furniture elements, but also with architecture and perspective, as well as with characters' silhouettes. There is an obvious ambiguity between figuration and abstraction, produced by the contrast between the imagery of the advertisements and the new picture created. Some of the works from the series allude to Salvador Dalí's and Richard Artschwager's interiors. One can also observe the enigmatic recurrence of certain elements from one composition to another.

Albert Oehlen began to work on this series in 2009; some Interieurs works are currently on view in the exhibition "Albert Oehlen, Malerei (Painting)" at mumok in Vienna until October 20th, 2013.

The two new spaces of Galerie Max Hetzler are located in Charlottenburg and are walking distance from each other, offering a different context for the artists. The one in Bleibtreustraße is a typical Charlottenburg residential architecture in a Wilhelmine building. It has been used as Galerie Max Hetzler Temporary in 2011, on the occasion of Glenn Brown's solo show. The other space is a former post office built between 1881 and 1902 on Goethestraße 2/3 by the architect Wilhelm Tuckermann.