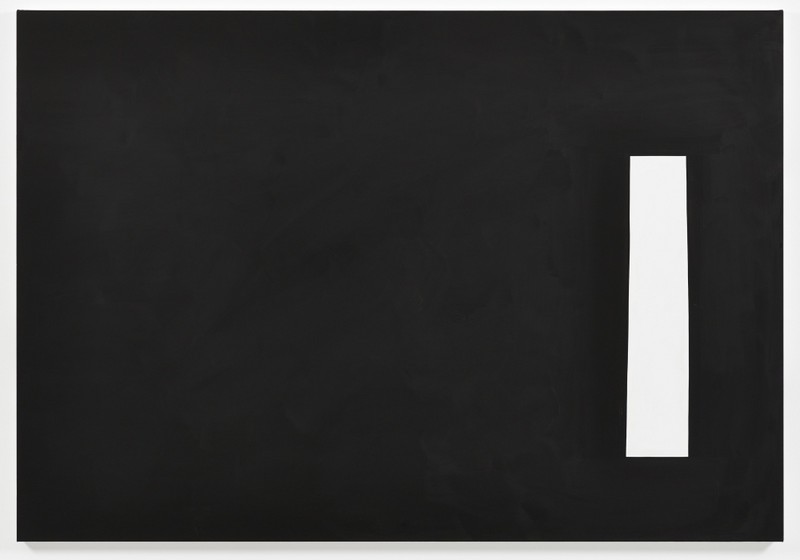 Galerie Max Hetzler is pleased to announce an exhibition with new paintings by André Butzer at Goethestrasse 2/3.

André Butzer's new works continue the ongoing engagement with pictorial means and their relation with each other. Since 2010, Butzer creates the so called „N-Bilder“ (“N-images”). They derive from an artistic measuring unit “N” which devised by Butzer refers to his self-created neologism “NASAHEIM”. “N” is not a calculable, rational quantity but rather represents an eternally recurring, verge-like space, presenting an original character.

While one painting from this exhibition still vaguely refers to the white planes that determined the horizontal buildup of former works, others already part with this constellation. What remains after this dissolution is a complete image picturing a single, white, swinging bar embedded in the right area of the surface. Butzer examines the autonomy and momentum of pictorial means. Finding the exact relation of the elements marks the basis of his artistic practice. Here, Butzer does not refer to fixed, profane dimensions or notions but continuously destructs geometric measurements and creates a free setting that lacks any rational determinations.

Butzer's paintings are not serial. Every single one offers its own structure that does not automatically follow a certain principle but always has to be explored anew. It becomes apparent which profound examination of effects and interaction of light, colour and form precedes these works. Depending on the conditions and incidence of light the paintings develop their own tension and colour. On closer contemplation, the black and white areas in consonance reveal nuances of the entire colour spectrum. Black – slightly red gleaming – not only absorbs light but serves the pictorial total in a luminiferous way, thus becoming a source of light. This leads to an almost solemn expression and emphasises the initial, founding character of the paintings.
The black and white planes are not a contrast but build a necessary entity within their relation of each other. Thus, evolving a particular dynamic which makes the works pulsate, even flicker. In this manner, the “N-Bilder” unify both statics as well as movement and create a rhythmic whole.

At the same time, Galerie Max Hetzler presents an exhibition with new works by Ida Tursic & Wilfried Mille at Bleibtreustrasse 45.