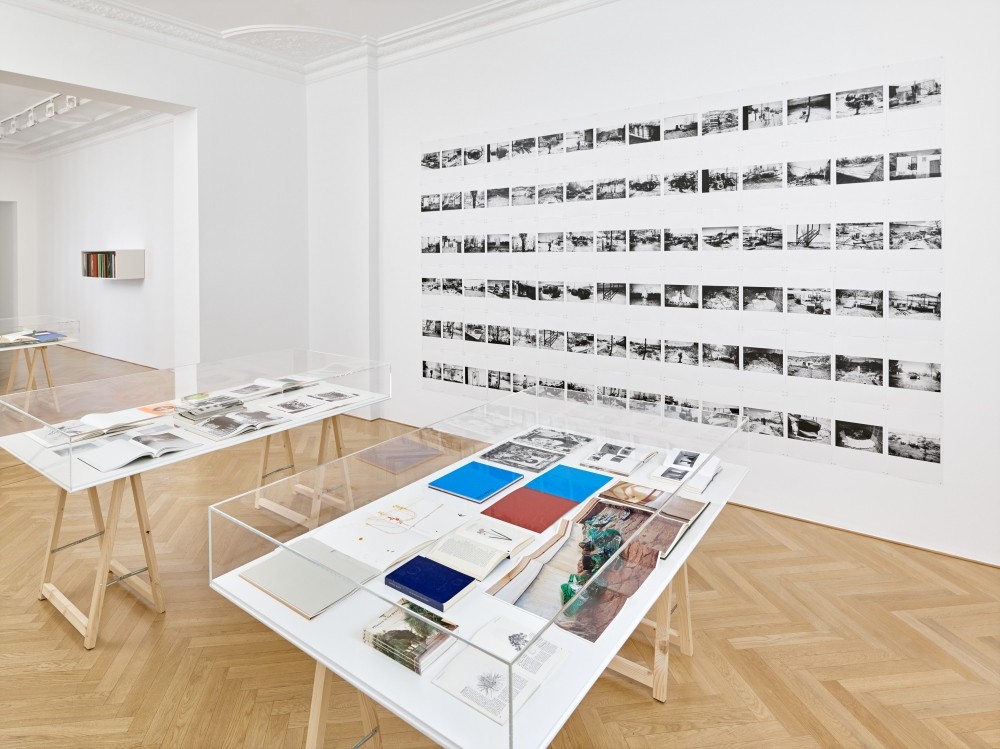 An artist book can come in many incarnations: it can be a work of art in its own right, a multiple produced in a limited edition, an artist’s take on their work, adding a narrative to individual images, or even a reinterpretation of the book as a medium. Galerie Max Hetzler presents an exhibition of artists, artist books and editions, in homage to the legendary gallerist Yvon Lambert and his own imprint of artist books started in the 1960s, and as a celebration of our fruitful collaboration with publisher and book designer Hans Werner Holzwarth, with whom we have been making books since 2000.

When Yvon Lambert opened his Paris gallery in the late 1960s, he put a strong focus on publishing from the start. A first collection was the series Mot pour mot with On Kawara, Robert Barry, Giulio Paolini and Daniel Dezeuze, followed by single publications such as Critical Limits with Daniel Buren, Six geometric figures and all their double combinations with Sol LeWitt and 10 Works with Lawrence Weiner. In 1992, Lambert began an ongoing series of bibliophile books, printed in limited editions under the title Une rêverie émanée de mes loisirs (Musings from my leisures). For these, artists are invited to conceive, alone or in collaboration with a writer, a book that completely follows their own imagination. The book is thus a work of art in itself, published in an edition of 150 copies. Until today, 27 books have been produced with artists such as Robert Barry, Christian Boltanski, Louise Bourgeois, Jenny Holzer, Rebecca Horn, On Kawara, Anselm Kiefer, Giuseppe Penone, with more projects in the works. Yvon Lambert will present the complete series at the exhibition, offering a rare opportunity to view at first hand the different approaches the artists have taken to the open format.

Book designer and publisher Hans Werner Holzwarth and Galerie Max Hetzler first worked together in 2000 on Inhaltsangabe / Summary of Contents by Albert Oehlen, a book in which the artist combines grey paintings with colourful exhibition posters created on a computer and his own text. At the time, Holzwarth already had a long history of close collaborations with artists including Barbara Bloom, Bogomir Ecker, Roni Horn, Raimund Kummer, Ed Ruscha and Kiki Smith, and as an art director for the publisher Scalo, where he created titles with Richard Billingham (Ray’s a Laugh), Larry Clark (Perfect Childhood), Robert Frank (Moving Out), Jim Goldberg (Raised by Wolves), Nan Goldin (I’ll Be Your Mirror), Boris Mikhailov (Unfinished Dissertation), Richard Prince (Adult Comedy Action Drama) and many others. His especially rewarding collaboration with Christopher Wool began with a publication for the Los Angeles MOCA in 1998, which focused on the artist’s own impressions of his work in black and white snapshots. In 2003, Holzwarth published Wool’s artist book East Broadway Breakdown on his own imprint, following it with several others, up to a recent book of photographic layerings, Yard from 2018. Another long-term collaboration started with Rebecca Horn’s book of poems and illustrations, Tailleur du Cœur, in 1999. Since then Holzwarth has published a collector’s edition of Horn’s films, an artist book that combines the facsimile of a handwritten Martin Mosebach novel with Horn’s overpainted photographs, and much more. Hans Werner Holzwarth will present a selection of these titles, many of which are now regarded as classics in their genre.

In 2017, the new shared project H2P I Hetzler Holzwarth Publications was inaugurated to produce special collector’s editions of specific artist books. Two strictly limited editions have been realized so far: a Zhang Wei monograph with handpainted covers accompanied by a painted trowel or shovel blade, and an oversized portfolio by André Butzer, which comes with an original work on paper.

With this exhibition, we celebrate the very special place that books still hold in the digital age, of documenting, disseminating and exploring art in beautiful and collectible objects.

The exhibition LADI ROGEURS: SIR LOUDRAGE – a still life with works by Loris Gréaud is still on view at Goethestraße 2/3 through 21 July 2018.

Hans Werner Holzwarth started as a photographer and corporate designer, first working at MetaDesign in Berlin, then setting up his own company, Design pur, with fellow designer Anja Nienstedt in 1988. In 1993, Holzwarth became the freelance art director for Scalo, the international publisher for photography, art and popular culture, where he was responsible for the conception and design of all books and presentations. For these, he received many awards including the Federal Design Achievement Award of the National Endowment for the Arts for Robert Frank: Moving Out (1995) and the Kodak Fotobuch Preis for Robert Frank: Moving Out (1995), Jock Sturges and Richard Billingham: Ray’s a Laugh (both 1996), and Tina Barney: Theater of Manners (1997). In 2000 he founded his own imprint, Holzwarth Publications, to work with contemporary artists on artist books and exhibition catalogues for galleries, especially Galerie Max Hetzler, and museums such as the Sprengel Museum, Hannover, Kunsthaus Bregenz and most recently a Georg Baselitz monograph for Fondation Beyeler, Riehen. Since 2008, Holzwarth has also been editing oversize monographs for the publisher Taschen, again collaborating closely with artists to produce special limited art editions that come with original artworks. Titles so far include Jeff Koons, Christopher Wool, Albert Oehlen, Neo Rauch, Ai Weiwei, Darren Almond: Fullmoon, Beatriz Milhazes and David Hockney: A Bigger Book.

Yvon Lambert established his first gallery in his hometown of Vence in the 1960s. Later in the decade, he opened a gallery in Paris, and by 1972 he decided to show the leading American artists of conceptual art, minimalism and land art, such as Carl Andre, Robert Barry, Sol LeWitt, Richard Long, Brice Marden, Gordon Matta-Clark, On Kawara, Dennis Oppenheim, Robert Ryman, Cy Twombly and Lawrence Weiner. He also presented European artists Joseph Beuys, Daniel Buren, Christo, Giulio Paolini and Niele Toroni. In the late 1970s, he installed his Paris gallery in new spaces where, while remaining faithful to his early artists, he exhibited Jean-Michel Basquiat, Christian Boltanski, Mircea Cantor, Nan Goldin, Douglas Gordon, Loris Gréaud, Candida Höfer, Jenny Holzer, Anselm Kiefer, Barbara Kruger, Louise Lawler, Roman Opalka, Andres Serrano and many others. In 2000, he opened the Collection Lambert in Avignon, a museum dedicated to his personal art collection of more than 650 works, later donated to the French state. In the early 2000s Lambert opened a bookstore offering a wide selection of art books, exhibition catalogues, rare books, original posters and works by artists, and in 2014 he closed his gallery to devote himself to the store and publishing books in collaboration with renowned and emerging artists. In October 2017, with his daughter Ève, he inaugurated the store’s new premises in the Marais in Paris, designed by Dominique Perrault. Beside an extended selection of books and art works, it offers a place for readings, book signings, exhibitions and other personal favourites by Yvon and Ève Lambert.
www.maxhetzler.com