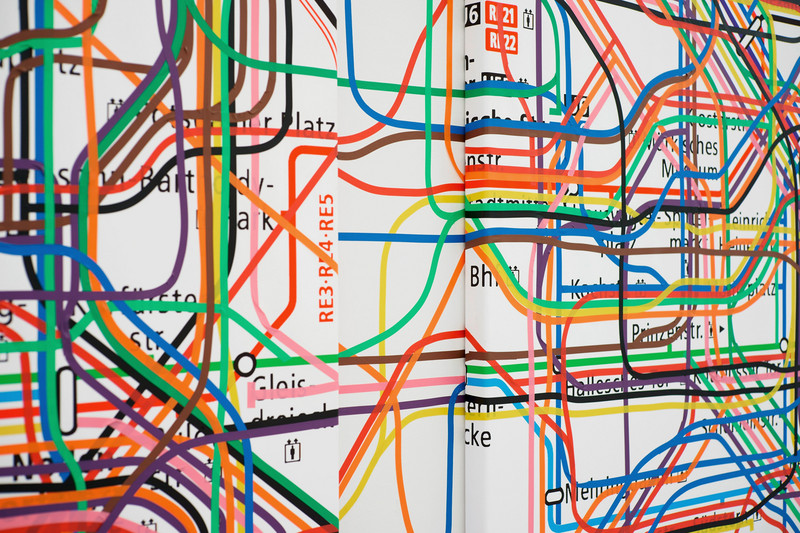 Galerie Max Hetzler is pleased to announce the first solo exhibition by the illustrator, artist and author Christoph Niemann with the gallery.

On the occasion of the 40 years anniversary of the gallery, Christoph Niemann shows the exhibition history as well as the artistic positions of the gallery in a series of new graphics. The artist and the gallerist, both born in the area of Stuttgart, share the same affection for the VfB Stuttgart. Niemann presents the gallerist and his artists with metaphoric images from the world of soccer. Well-known works by Jeff Koons, Albert Oehlen, Mona Hatoum and others artists inspired him to develop an entire series of absurd silk-screen prints: Galerie Max Hetzler celebrates 40 years anniversary of VfB Stuttgart.

For many years Niemann has been working for the New York Times as an author and illustrator. For its blog he has created the series Red Eye and Let it Dough. What could only be viewed digitally before, is now exhibited as drawings and prints. Here, Niemann ́s creativity revolves poetically around daily situations. Red Eye is a visual diary of a sleepless overnight flight, while the photo series Let it Dough retells the history of creation with cookie, dough and sprinkles.

In a project for the The New York Times Magazine, the artist explored the physical limits of creative work. While running the New York Marathon, Christoph Niemann drew his impressions of the race live and shared the images with his readers via Twitter. He concluded the series with a canvas painting of his foot on the finish line. This project will be documented as a large wall collage.

Niemann ́s books I Lego New York (2010) and Abstract City (2012) are a homage to the big city. Now, he is inspired by the subway map of the S- and U-Bahn system of Berlin. The metro grid turns to an impervious maze and starts to oscillate between information graphics and abstract art – simple and complex, familiar and yet unexpected.

For his interactive digital projects, Niemann collaborates with the multimedia-editor Jon Huang who expanded his work with interactive software technology. These include the app Petting Zoo (2013), the live-video game for the Olympics in London, Competitive Armchair Olympics (2012), and recently You Made That (2013) – homage to the invention of Photoshop 25 years ago. You Made That allows the visitors to creatively experiment using extraordinary tools such as a squeezed lemon and animated scotch tape.

Christoph Niemann, born 1970 in Waiblingen, lives in Berlin. After studying at the University of Fine Arts in Stuttgart, Niemann moved to New York City in 1997 where from 1997 through 2008 he had his principle residence. His illustrations were published on covers in magazines such as The New Yorker, Time Magazine, New York Times Magazine, Wired and the ZEITmagazin. 2010 he was inducted into the Art Directors Club Hall of Fame, New York. Currently Niemann is writing and drawing for Abstract Sunday, the blog of New York Times Magazine.

On the occasion of the 40 years anniversary of the gallery, a publication, in collaboration with Holzwarth Publications Berlin, of the above mentioned VfB series will accompany the exhibition.
www.maxhetzler.com