...beyond reach but within reason 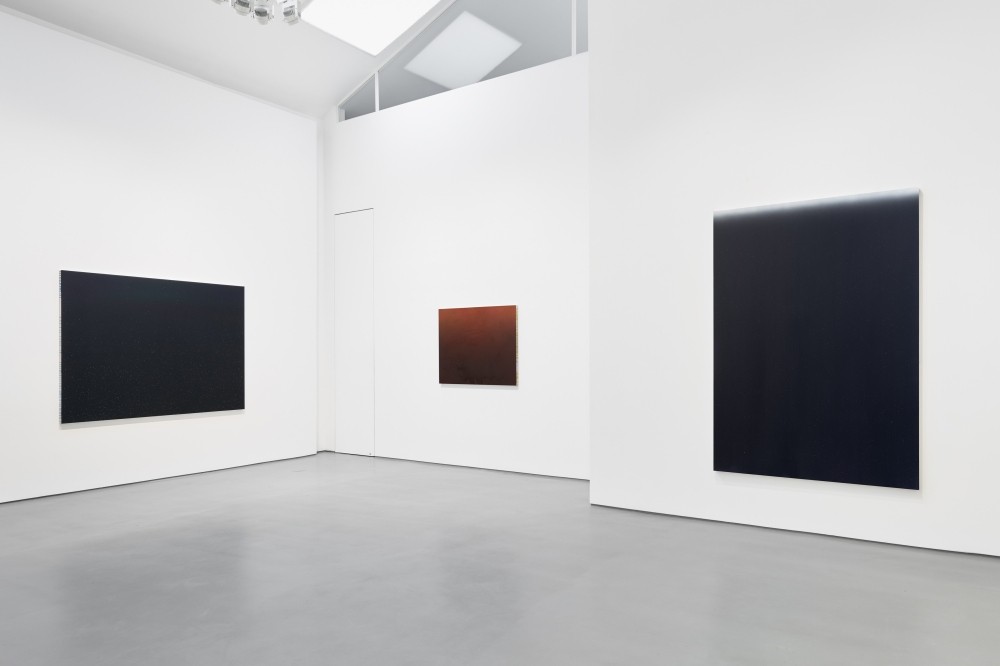 Galerie Max Hetzler is delighted to present ...beyond reach but within reason, a solo exhibition with recent paintings by Darren Almond.

Underpinning Almond’s sculptures, films, photographs and paintings is an exploration of time and space as metrics of being: ways of measuring, conceptualising and understanding what it means to be here on earth. His Timescape paintings, which stretch these concerns to their furthest spatial magnitude, visualise the outer reaches of the cosmos: remote fields of coloured stars, gleaming auroras, and measureless dark empyreans.

Informed by but not directly based on deep-space photography, the Timescapes figure what lies beyond – far beyond – that which Almond has suggested is the furthest marker of distance we can really comprehend, the moon. Past this, our lexicon for scale runs out and we require the digital language of numbers, as figured in Almond’s ongoing series of number paintings, here exemplified by a mirrored work that, again, inserts the individual viewer (and time) into the equation. Continue onward to where numbers become too large to have meaning, and the usable language that remains is that which the paintings speak: that of abstraction, even the sublime.

When we look into deep space, we are of course moving back through time. Our astronomers are looking at reflected light; moreover, given recent scientific breakthroughs concerning gravitational waves, they are now able to observe a time beyond the visual field. Almond has long folded time and space together in single images and objects, as in his long-exposure Fullmoon photographs, and it was on a Fullmoon shoot in the unpolluted air of Patagonia, in 2013, that Almond first truly saw the colours of stars, their various wavelengths of light. His Timescape paintings – like the time-based Hubble photographs, based themselves on transcripts of fields of data and made dreamily readable by artificially applied tints – are powered by colour. Despite their darkness, there is no black in these works, a nod (as Almond has noted) to Heinrich Wilhelm Olbers’s ‘dark night sky paradox’: they are, rather, made up of layers of pigment-rich Aquacryl. They figure colour as the way we conceptualise extreme cosmic distance, a schematic language beyond words and numbers. And a very human one, perhaps most appropriate for an age of increased consciousness and insecurity about our infinitesimal place in the universe.

The Timescape paintings also move beyond the human in other ways. Compositionally they use formats of controlled chance, with Almond upsetting the rhythms and motor control-driven pattern creation that come with manual application of coloured dots, not infrequently creating looming voids – the void space being a longstanding focus of his – and decentred compositions. Unlike the gridded format of earlier star maps he has made (from 2000 onwards), these paintings assume landscape and portrait formats, tipping the scale from scientific control into the speculative, the painterly, the explicitly analogue. The Timescape paintings, then, are anchored by a practice that has consistently questioned how we, as individuals and as a species, fix our position in the universe, and the consequences of doing so. At the same time, however, they venture deep into uncharted territory.