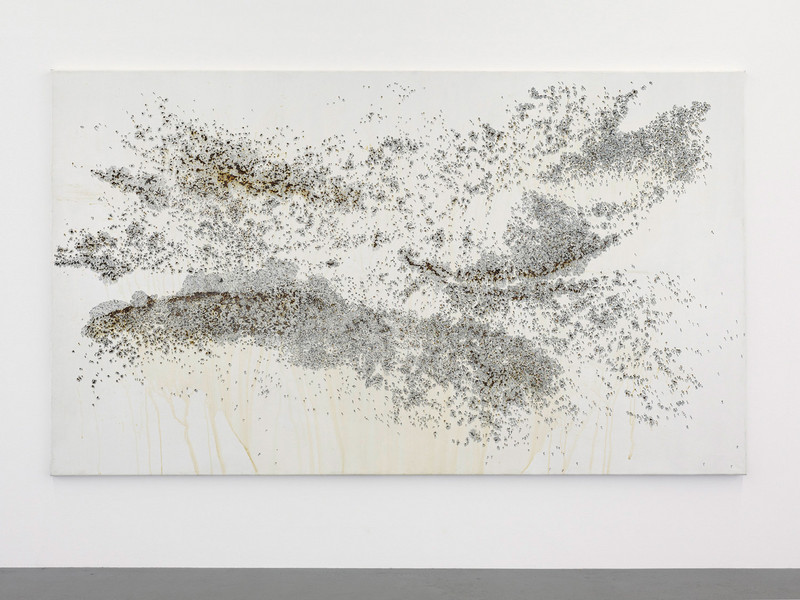 Galerie Max Hetzler is pleased to present an exhibition of selected works from the 80s by Georg Herold. Herold's varioulsy shaped body of work, which spans from sculpture and painting to installation and video, reflects the artist's political, cultural and social reality. By the use of 'poor' materials in conjunction with wit, irony and humor, he scrutinizes commonly used clichés, thus playing with the viewer's perception both in content and form.

The visual motifs Herold established since the 80s, consisting of roof lath, brick and caviar, assembled with ordinary objects such as felt and silk stockings, are featured in the exhibited works.

In Herold's so called "lath-paintings" the traditional stretcher is exempt from supporting the canvas. Instead, the raw material itself, the roof lath, is taking the role of the canvas. The recurrent desire of the artist to limit himself to the essential emanates from his attempt to keep as free as possible from existing associations. Herold mistrusts the sublime, and wants to knock off art from its pedestal. As in Pyramide, 1990, the contemplation of fundamental questions such as those of volume, physical presence and aesthetics, always comes first.

Image and concept are linked closely in Herold's work. Titles often describe accurately what is visually represented or at best comment on it ironically such as in Blind Order, 1990, a sculpture made of roof laths and bricks, which are wrapped in a felt carpet. Other works such as Melancholia, 1990, refer directly to the publication "The Anatomy of Melancholy" of the English scholar Robert Burton.

In an interview from 2005 Herold wonders how people react to his brick-paintings and if they would hang them above their bed. While one of the paintings in the exhibition seems to quote Lucio Fontana, the bricks in two earlier works seem to challenge the conventions of painting. Appearing as motifs of a composition which seems to defy gravitation, they become alien to their original use to build homes for the petite bourgeoisie to free the way for the subversive act of the stone throwing wannabe revolutionary.

If the brick stone stands for German squareness, caviar, which Herold often applies together with schellac on the canvas, becomes a metaphor of the art world, which can sometimes be associated to luxury life style.