Halftone: Through The Grid 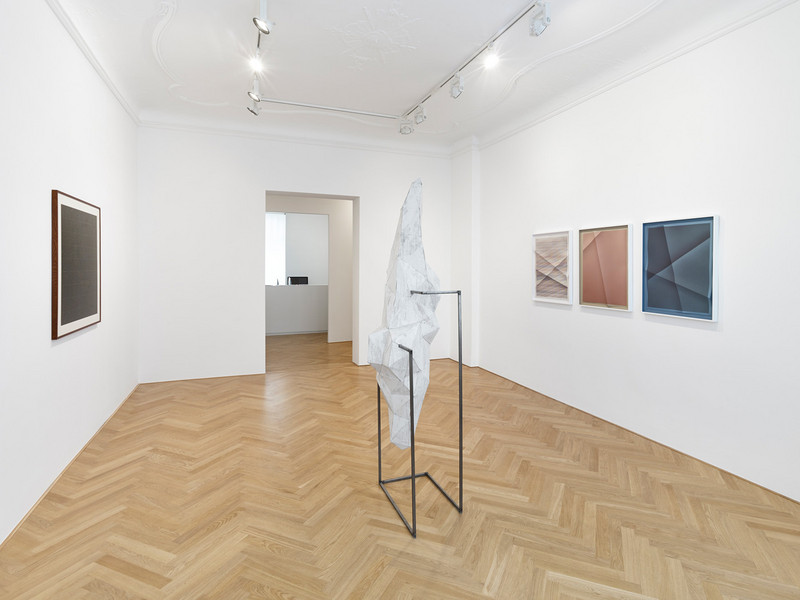 The grid is dead, long live the grid!
For contemporary artists, grids are not anymore the result of Mondrian's or Malevich's modernist geometry, but a machine-generated object, endlessly reproducible without the intervention of a human hand. Call it halftone, bitmap or raster, it is always one of the many forms of mechanical or digital processing, by which an image or a three dimensional piece is turned into a multitude of coloured dots, or pixels, arranged in a logical matrix. This is how digital cameras, computers and printers handle images. Any shape can be transformed into mathematical data, and this data can be used again to produce an image displayed on a screen, printed on paper, on canvas or carved into any material. In a curiously ambiguous evolution, the technique offers an opportunity to work with as much as a form of mechanisation to fight against, while the man - machine relationship hesitates between cooperation and competition.

Hence, a constant dialogue at the heart of the show: Albert Oehlen proposed in the early 90's, through his first Computer- paintings and drawings, to manually compensate for the deficiencies of the digitally generated image. Another influential pioneer, Christopher Wool works with the possibilities of reproduction of his artistic gesture, operating at the limit between the mechanical and the manual processes, adding in this case one further stage in this exchange by transposing the rasterised pattern into the warp and weft of a rug.

A younger generation has now widely extended this reflexion, and new pictorial practices have appeared: Jeff Elrod composes striking hybrid images with analogue and/or digital processes, using computer softwares. Ida Tursic & Wilfried Mille create dense layered paintings dealing with the disappearance and the re-materialisation of images, questioning the clear distinction between figuration and abstraction, as does Toby Ziegler in his pictorial and sculptural works, deeply related to this reflection on the digitisation of images and the loss of information that can occur during their circulation.

John Houck's Aggregates are first produced by computer software, but then creased and photographed, to become objects that exist between the digital and the analogue, between two and three dimensions.

By means of precisely matching printing technologies and materials, Tauba Auerbach's transparent pieces and polarised images also play with our visual perception of the space works exist in.

Michael Raedecker's paintings reveal the oldest analogue precursor of the rasterisation process: the drawing grid, while Mark Barrow & Sarah Parke use the loom, and weaving, as another early form of matrix-based image production, which echoes in the modern CMYK colour system. Meanwhile, Kelley Walker's pieces use the silkscreen, yet another analogue grid, to re-appropriate stereotypical media pictures. They interrogate what is constant and what is fluctuating in an image's shift from the glossies to the gallery.

The relation between the mathematical system and the manual intervention appears clearly in the works of Darren Almond where mechanically produced objects form a rigid matrix, only to be disturbed again by the artist's intervention, rendering Almond's clocks abstruse, but strangely readable. In Navid Nuur's studies for The Eyecodex of the Monochrome, it is the materials used and the distance to the viewer that turn a dense computer-generated pattern into a smooth monochrome.

In a show that will take place simultaneously in the Berlin and Paris venues of Galerie Max Hetzler, including a very wide range of media and different practices, grids become encoding and decoding devices, which logical rigidity is ceaselessly challenged by human interference.

Halftone is organised by Pierre-Nicolas Bounakoff and Jean-Marie Gallais.

A publication (English text) will accompany the exhibition.
www.maxhetzler.com