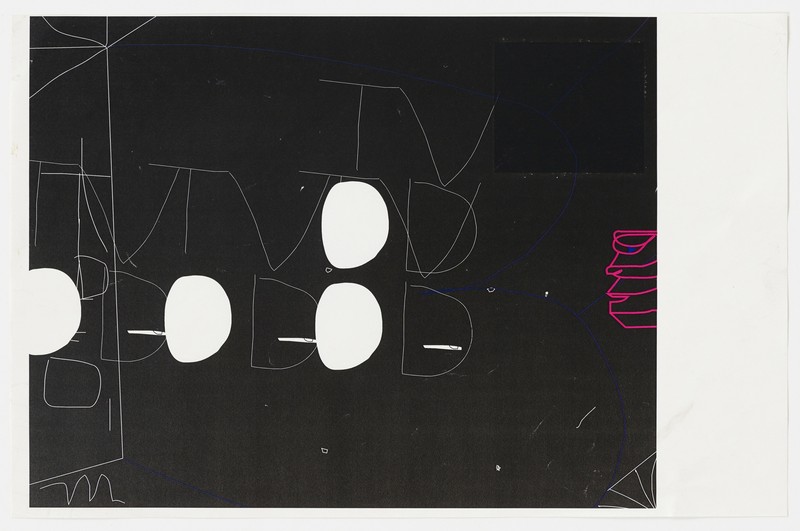 Jeff Elrod's work is based on the combination and interweaving of digital and analog practices. In his paintings and drawings he uses basic editing programs like Photoshop or Illustrator and adopts their typical forms of digital imagery. He first develops sketches on the computer which he then transposes on canvas or paper by using 'classical' techniques such as painting, drawing or spraying, sometimes printing them directly onto the material. Thus, Elrod creates works that immediately evoke an aesthetic of early digital technique and computer-based animation from the 90's as well as a notion of late 20th century's abstract painting. His works thereby capture a moment when analogue and digital production clash, connecting the notions of painting, abstraction and digital movement.

The exhibition presents canvases, all created in 2015 and 2016. Some of the pictures show blurry, vague compositions. Their structure and lines fade to a point of mere undefined form and evoke optical, even hallucinatory effects. The surface of the partly shaped canvases seems to glow or flicker, almost facing its own dissolution. Other works convey the impression of a computer screen. Without any background or foreground they offer compositions of abstract elements which seem to float adrift in the virtual space. One work features details of an existing motif – birds flying up – which are densely covered by black spray paint. The central part of this motif can no longer be recognised and thus resists the interpretation of the spectator.

Furthermore, the exhibition shows a selection of medium to small scale works on paper from the last twenty years. As for his paintings Elrod here combines various methods between manual and digital technique. While the early works have been produced with a colour laser printer – which just became popular during that time – and are limited to simple, computer-mouse generated lines, dashes and letters the recent works already show a more complex image structure. Pixelated and sprayed planes, overlapping areas, cryptic signs and seemingly excised elements build a playful framework that approaches ideas of form, texture and composition.

At the same time, Galerie Max Hetzler presents the exhibition Works on Paper with Albert Oehlen at Goethestrasse 2/3.