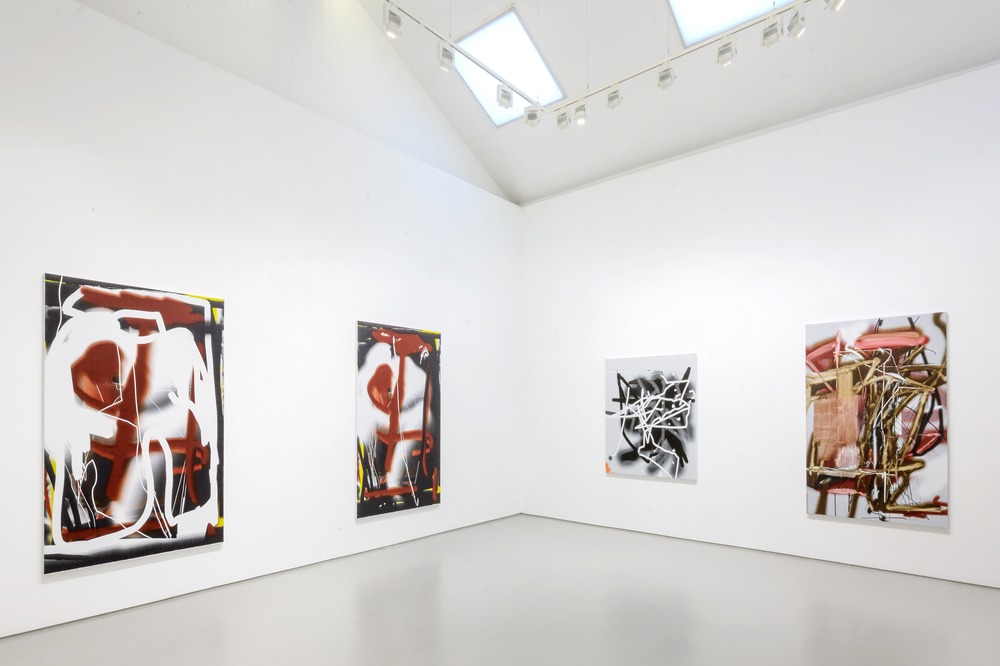 We are pleased to announce the third solo exhibition at Galerie Max Hetzler by Jeff Elrod. This will be his second show at the Paris gallery.

An American abstract painter, Jeff Elrod explores the mutual mimesis between machines and human beings. He has employed since the late 1990s a technique that combines both manual and digital methods that he refers to as ‘frictionless painting’. Elrod works on the computer, then transposes the digital renderings onto the canvas by hand using more “traditional” techniques including acrylic, tape and spray paint or more recently unconventional ones such as printing.

Jeff Elrod resorts to basic editing softwares such as Photoshop and Illustrator in the creation of his large-scale artworks. The end result adopts the computer programmes' format and conveys a sense of illusory depth. This confrontation between new technologies and more conventional forms of painting reveals an imagery that connects the history of painting, abstraction and digital movements altogether.

"Computers are just an extension of the paint brush. It’s not an adversarial relationship, but it is true that at one time the art world seemed threatened by computers, but that seems so old fashioned now..."
- J.E. in an interview with Bill Powers

Jeff Elrod integrates photographic elements such as superimpositions, focus and transparency in his artistic process. The continuous technological innovation in editing tools and print technology developed his practice even further.

In 2009, Elrod started to print digitally manipulated images sourced from his own works directly onto the canvas. In this new series, he investigates ways of imitating a vision defect that almost triggers hallucinations. With no focal point, the resulting blurred forms disorient the eye while the visual fields erase any coherence.