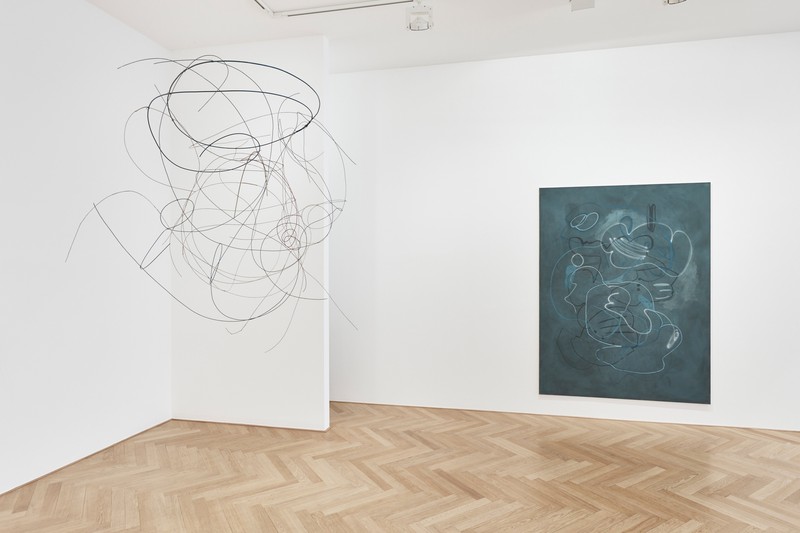 Galerie Max Hetzler is pleased to announce an exhibition with works by Karel Malich and Ute Müller at Bleibtreustrasse 45.

This exhibition should draw attention to a very recent work, showing a new interest in the powerful tension between material and process. And it should bring awareness to a lesser-known work from a great artist in Eastern Europe’s constructivist tradition. There are some discernible similarities in the works of the young Austrian Ute Müller (*1978) and the most significant “classical” Czech artist Karel Malich (*1924). Yet, above all, it is especially astonishing to trace parallels and similarities in the artistic attitudes and processing of works and form over the generations and thereby experiencing art that wraps us in its origin.

In the late 1980s, early 1990s, I traveled extensively to countries behind the Iron Curtain, which fell in 1989. At that time, as a sworn broker of the artistic positions of these years, I had to open new, and also old, doors to the then prevailing currents in the perception of art. There was, of course, a difference between two political systems with very different approaches towards the function of visual arts, different positions of information, and of presentation. Different working conditions for male and female artists. Different histories. But there was also the great continuity of modernity. I could surprisingly and immediately encounter these in Poland and Czechoslovakia. It was a different modernity, which had developed a different history over time, one that continued the Cold War’s strong tradition of resistance. A resistance that, at times, required great courage and great stamina. In the period after 1918 this orientation was accompanied by an unprecedented departure in new forms of art and construction from countries such as Poland and Czechoslovakia. Thus, the first museum in Europe dedicated exclusively to modern art emerged in the Polish industrial city of Lodz under the guidance of constructivist artist Władysław Strzemiński. It was the most sought after museum after the Museum of Modern Art in New York. There was a unique awakening in new forms of architecture, art, and photography, accompanied by the special dynamic of advanced economics in Czechoslovakia, bringing forth testimonies differing from Poland. Testimonies that have not yet been adequately addressed by far.

These cultures of high modernism were, starting in the late 1940s after the devastation of the war, confronted with the strict specifications of socialist cultural policy. This resulted in a balancing act between tradition and resistance by most cultural workers, who were not searching for a road to exile. Consistent preoccupations with modern shapes continued to develop in niches but were barely developed in public in their own countries or within a Western context.

As a result, works of great originality and meaning emerged in Czechoslovakia as artistic visions from artists who drew on these traditions and wanted to somewhat oppose the totalitarian characteristics of society. Karel Malich was one of these artists who, in a rich environment, played with the smallest of spaces.

Although his work was occasionally seen in Western exhibitions at important museums, it was obscured by the paradigms of Western constructivism. The background and parameters of perception may have been too different. Only today are we in a position where we are able to read and understand the differences of constructivism in other parts of the world, such as Latin America or Eastern Europe. And, on closer inspection, the question arises: how much did Malich’s work actually have to do with constructivism?

It is interesting how much light a recent exhibition at the Museum of Modern Art in New York (Transmissions: Art in Eastern Europe and Latin America, 1960-1980) brings to these differences and evidently demonstrates what different artistic positions underlie seemingly similar forms.

In any case, the wire sculptures developed by Malich since the 1970s represent a unique group of works in the context of art from the late 20th century. The most important elements of his confrontation with constructivism, but also the early preoccupation with almost exempt spaces, “negative spaces,” lead to structures made of wire. He increasingly turned to these during his early interest in spiritual perception, the connection between figure and landscape, and the representation of energies. The fact that the development of this work comes at a time when the great social awakening of Czechoslovakia had taken place in previous years, is wiped out through a regressive oppression, which, in addition to logical and stringent artistic reasons, may have promoted the way towards inwardness and spirituality. In his Prague studio in those years true marvels of lightness and perception of space came into being.

In the exhibition two works from the constructivist context of the 1960s will be seen, a period when many already had tendencies towards minimalism. There is a Plexiglas sculpture from 1967-69, in which two rooms are placed over each other through transparent and black Plexiglas. And in Blue Corridor, from 1970, a series of wall works is completed through a great minimal gesture. The choice of color quite deliberately refers to French artist Yves Klein. The other sculptures in the exhibition are all wire works from the 1970s. Two of these (White Cloud, 1975 and The unleashed Landscape I, 1973-74) are presented in the artist’s studio version and two others as a technically precise production, which was always very important to the artist (Energy, 1974-75 and Cosmic Egg, 1973-74/2014).

If a younger generation of artists is once again seriously dealing with the language of materials today, as Ute Müller is, then it is also good to place these conflicts in perspective, as the present exhibition’s confrontation with works from Malich does. In the present day Viennese art scene and elsewhere, the question increasingly arises of what the material of art is today, what material can mean, what meaning can be carried by which materials, and which role creative and manual processes can play. Ostensibly, this currently takes place, above all, in the field of new forms of sculpture as they have prevailed in recent decades. However, it also occurs in painting, which, first and foremost, deals with abstract image size and develops new image worlds and sensibilities. In Ute Müller’s work we find both painterly and sculptural approaches. Next to a small group of sculptures, which pleasantly addresses different topics of the creation of spatial entities and thereby behaving as iconic entities, there are four paintings on canvas in tempera set against the works of Malich. These are paintings addressing and developing the possibilities of material and the process of painting in a special way. The process of painting seems to determine the shape. The energy behind the application of color results in a very subtle painting. These works imply spaces of presence and absence, of the empty spaces, also in the sense of “negative spaces,” they are visually “related” to Malich’s “paintings” in the room and, more importantly still, they are both moved by the same energies.

Karel Malich (*1924, Holitz, CZ) lives and works in Prague. He studied at the Academy of Fine Arts Prague. In 2007, the Ministry of Culture of the Czech Republic presents Malich with the State Award for Fine Art. His works were presented in numerous exhibitions, most recently at Ludwig Museum, Coblenz (2014); German Historical Museum, Berlin (2012); Museum moderner Kunst – Stiftung Ludwig, Vienna (2011); MoMA, New York; The National Art Museum of China, Beijing (both 2010).

Ute Müller (*1978, Graz) lives and works in Vienna. Müller studied at the University of Applied Arts Vienna and the Royal College of Art in London. Her work was exhibited in several solo and group shows, such as Austrian Cultural Forum, New York; Kunstpavillon Innsbruck (both 2015); Kunsthalle Wien, Vienna; Kunstverein Hamburg (both 2014); Contemporary Istanbul (2013); Kumho Art Museum, Seoul (2011); Künstlerhaus Klagenfurt (2009) and MUMOK, Vienna (2005), among others.

Since 2015, Peter Pakesch acts as chairman of the Maria Lassnig private foundation. From 1981 until 1992 he ran Galerie Peter Pakesch in Vienna where he showed Albert Oehlen, Günther Förg, Karel Malich and Franz West, among others. 1996 he became director of Kunsthalle Basel and in 2003 took over as director at the Universalmuseum Joanneum and Kunsthaus Graz until 2015.
www.maxhetzler.com